IRVINE, CA – When the current Porsche 911, known to purists as the 996, debuted six years ago, styling was an issue. Replacing the beloved 993, itself a direct descendant of the original 911 that bowed in 1963, was no easy task, and virtually any new model was certain to undergo close scrutiny from devotees of the quintessential German sports car. But Porsche inexplicably placed the entire front clip from the significantly less expensive Boxster roadster onto its new 911 and called it a day, instantly reducing the car’s exclusivity and desirability.This did not sit well with critics or owners of the brand. Now, six years after the 996 arrived, the redesigned 997 debuts and rights that wrong, while improving the car across the board. For 2005, the new Porsche 911 will be initially available as a Carrera and a Carrera S in coupe format only. In keeping with Porsche tradition, the Carrera S is the higher performance model.

Also in keeping with Porsche tradition, the 3,075-pound 2005 Porsche 911 Carrera is powered by a rear-mounted, water-cooled, aluminum 3.6-liter flat six engine generating 325 horsepower at 6,800 rpm and 273 lb.-ft. of torque at 4,250 rpm on premium unleaded fuel. This is a modest increase of ten horsepower over the 2004 model, good for 0-60 mph acceleration in 4.8 seconds, according to Porsche. Additionally, the motor is 15-percent less polluting than before thanks to a revised emissions and exhaust system.

The 3,131-pound 2004 Porsche 911 Carrera S gets a similarly configured 3.8-liter flat six engine making 355 horsepower at 6,600 rpm and 295 lb.-ft. of torque at 4,600 rpm. Not only is the displacement greater, but also the intake manifold and intake camshaft lift pattern have been modified. The Carrera S also gets a higher performance cooling pump and an oil/water heat exchanger with two additional cooling layers. Porsche says that acceleration from 0-60 mph takes 4.6 seconds.A new six-speed manual transmission is standard on both models. Steel synchronizing rings (carbon-coated in first, second and third gears) help manage the engine power increases and ensure top performance, making the first two forward gears triple rather than double synchronized. From the driver’s seat, the result is reduced shifting force and shorter travel between gears. Standard 911 Carrera models have a single-disc dry clutch while the 911 Carrera S gets a new self-adjusting clutch.

Optional is a manually interactive, five-speed automatic Tiptronic transmission. The driver can change gears using switches on the steering wheel or the shift lever between the seats. Software updates help Tiptronic to better mimic the way enthusiast drivers use the accelerator, brake and clutch in cars with a manual gearshift. Additionally, when the standard Porsche Stability Management (PSM) system is shut off and the transmission selector is in manual shift mode, Tiptronic no longer upshifts at redline like before. The transmission has also been upgraded to hold gears longer, shift smoother, improve cooling, and require less maintenance.

Porsche Stability Management has been upgraded for faster reaction times. Also, when the driver shuts PSM down, it no longer reactivates as soon as the brake pedal is depressed. Now, the driver must exceed the threshold at which the ABS will engage before PSM steps in to save the inexperienced.

For the first time, 18-inch wheels are standard on the Porsche 911 Carrera, shod with 235/40 tires in front and 265/40 rubber in the rear. There is no spare tire: instead an on-board air compressor and tire sealant allow the driver to limp the 911 to the nearest service area at speeds up to 50 mph. Brakes are cross-drilled and inner-vented all around, measuring 12.5 inches in front and 11.8 inches in back, and calibrated to provide quicker response than the 2004 model. A new variable rack-and-pinion steering system quickens the steering ratio the further off center the steering wheel is spun for better low-speed maneuverability.

In addition to more engine power, spending extra for the 2005 Porsche 911 Carrera S adds Porsche Active Suspension Management (PASM), upgraded brakes with red-painted calipers, bigger wheels and tires, bi-Xenon headlights, a multi-function steering wheel, simulated aluminum interior trim, and a silver decklid logo. Carrera S models also have round dual exhaust outlets rather than the ovals on the base car. Inside, the gauges have aluminum, rather than black, faces, and the engine cover is painted silver.

Performance upgrades for the 2005 Porsche 911 Carrera S include 19-inch wheels with 235/35 tires in front and 295/30 treads in back. The brakes are 13 inches all around, with larger brake pads. Optional on both 2005 911 Carrera models are Porsche Ceramic Composite Brakes (PCCB), previously only offered on the 911 Turbo. Benefits include a 50-percent reduction in unsprung weight, less wear for brake pads, and more consistent braking performance.

With PASM, the shock absorbers continually adjust to road and driving conditions, while accelerometers measure vertical body motions. In tandem with sensors that monitor steering angle, road speed, brake pressure and engine torque, PASM is able to adjust the suspension according to road and driving conditions. Furthermore, the system has five special software settings for lane change, vertical control, lateral acceleration, braking, and load changes to accommodate the most frequently experienced ride and handling situations.

Not only is the new 911 more powerful and a better performer; it looks the part. Porsche has widened the 2005 911 Carrera’s track by nearly an inch while retaining last year’s wheelbase and tapering the body in the middle. The new 911 Carrera is also taller top to bottom, wider fender to fender, and shorter stem to stern, and slices through the atmosphere with more grace than before. With the return of traditional round headlamps and a more curvaceous body, Porsche provides its flagship sports car with a more traditional appearance that enthusiasts are likely to embrace.

Interestingly, the side mirror design, similar to that of the Porsche Carrera GT supercar, channels air to reduce cabin noise while keeping the side glass free of dirt and moisture. The new bodywork also produces less lift, improves engine and brake cooling, and better keeps the front tires glued to the pavement. The rear spoiler automatically raises at 75 mph for reduced downforce and lowers at 50 mph for a cleaner appearance. The 2005 Porsche 911 Carrera’s body is also more rigid and resistant to flex.

Inside, a new interior includes upgraded materials and improved controls. Six airbags are standard, including two side head airbags that deploy from the tops of the windowsills. Other standard equipment on the 2005 Porsche 911 Carrera includes automatic climate control and Porsche Communication Management (PCM) complete with an upgraded nine-speaker audio system.

New seats absorb vibration better, and they’re wider to accommodate larger drivers. The seats are also mounted closer to the floor, and the pedals are further away. Standard seats on the 2005 Porsche 911 Carrera are manually adjusted for height, fore, and aft settings, with a power backrest perfecting the driving position. Optional are fully powered 12-way seats with memory, sport seats with firmer padding and thicker bolsters, or adaptive sport seats that combine full power adjustment with sport padding and bolsters.

Every Porsche 911 Carrera gets a steering wheel that tilts and telescopes for 2005, helping drivers to find a more optimum position for the task at hand. A multi-function steering wheel is also offered for the first time, standard on the S and optional on the base Carrera. Audio, navigation and telephone systems can be operated using the controls on the wheel. It can be trimmed to match the leather on the seats, or with either wood or carbon.

To better accommodate the detritus of daily living, the 2005 Porsche 911 Carrera’s storage and luggage areas have been improved, with a bigger glovebox, a larger forward cargo compartment, and expanded door panel bins offering more space to stow stuff.

For 911 owners that plan to take the car to the track, a slick optional Sport Chrono Package Plus allows the driver to record and display lap times, count laps, and allows for more aggressive settings for PSM, PASM, and the Tiptronic transmission. Other options include a CD changer mounted in the luggage compartment, a 13-speaker Bose Surround Sound System with AudioPilot technology, and a DVD-based navigation system. Porsche ParkAssist, a programmable HomeLink universal transmitter, a steel sunroof and a roof rack are also available.

Prices are expected to nudge north just a bit, starting right around $70,000 and going up from there. After the launch of the 911 Carrera coupes, expect convertibles and an all-wheel-drive 911 Carrera 4 within the year. New 911 Carrera 4S, Turbo and GT models are further out, likely arriving during the 2006 calendar year.

Clearly, the 2005 Porsche 911 Carrera is a better car in every way than its predecessors, successfully blending traditional styling cues with modern technology and convenience. The bar has been raised…again. 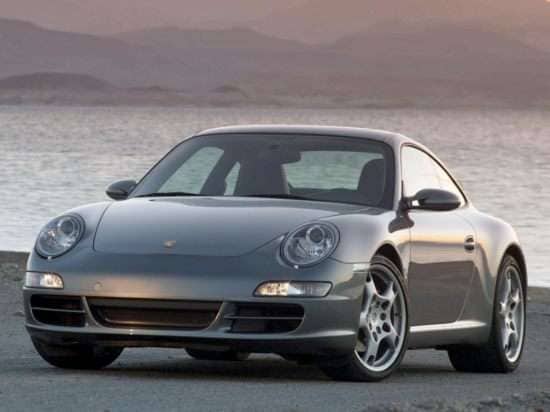