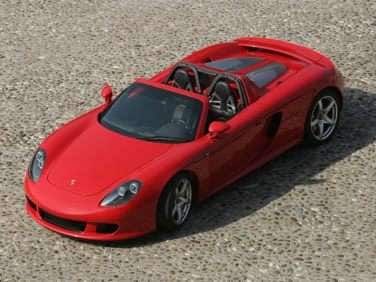 All About Porsche Carrera GT

Some say the limited production mid-engine sports car Porsche offered from 2004 to 2007 is the ultimate expression of what the Boxster could be, were Porsche permitted to develop the car to its full potential. Given the two kind of look alike, and they share a similar powertrain layout, this is a plausible statement.

In actuality though, the Porsche Carrera GT was a stillborn LeMans racer, repurposed for the street. For the 1999 racing season, Porsche had made plans to campaign a mid-engine roadster in the LeMans series and proceeded to develop a car to compete. A 5.5-liter V10 engine was specified to power the racer—rather than a turbocharged version of Porsche’s traditional flat-six engine.

Students of Porsche history will recall this was also right about the time the company earnestly went into development for its Cayenne sport utility vehicle. To keep that project moving, as it was deemed more critical to the future of the company than winning at LeMans—yet again—engineering talent was moved out of the racing car and into the Cayenne. There is also some speculation VW-Audi chairman Ferdinand Piech wanted a clear field for the Audi R8 LeMans cars to dominate the series. This would have been considerably more difficult to do with a brand new mid-engine Porsche racer to contend with.

Thus, Porsche found itself pretty well along in the development of a mid-engine sports racer, with no ready outlet for it. However, this was also around the time Ferrari’s one-off limited production Enzo was taking to the road.  Mercedes-Benz had also done a deal with McLaren to produce the limited production SLR. So Porsche’s management team decided to produce the Porsche Carrera GT for the street as a limited production halo model. The car was first shown as a concept at the Paris Motor Show in 2000, the production run started in 2004, with a price tag of $448,000 in the United States.

For the production car displacement of the V10 engine was increased to 5.7-liters. It used forged titanium connecting rods, Nikasil coated cylinder bores, forged pistons, four cams, and 40 valves. Weighing a mere 472 pounds, the Carrera GT’s engine also used a dry sump lubrication system with eight oil pumps. The rear drive powertrain ran a six-speed manual transmission with the first-ever street application of a ceramic clutch. The engine was quoted as generating 612 horsepower and 435 ft-lbs of torque. Porsche claimed a 3.7-second zero to 60 acceleration time and a top speed of 205 miles per hour.