One is almost never afforded the opportunity to act out the fantasies of youth as an adult.  Some experiences simply can't match the fantastical parameters laid out by the mind of a child, as the ‘real world’ frequently fails to impress with its adherence to reality and logic.  Occasionally, however, it seems that the rules that govern the universe are suspended, and you find yourself driving a Land Rover through an airplane.

Not just any airplane of course: a gargantuan Boeing 747, in keeping with the full drama of the moment. And not just any Land Rover, either: the 2014 Land Rover Range Rover Sport, completely redesigned for the current model year.

How did I get here behind the wheel of this high performance SUV, plotting a course from economy all the way through to first class by way of a torturous obstacle course that had both the Range Rover Sport and the Boeing groaning in metallic protest?  And why was it all taking place in the stoic English countryside?  The answer lies in Land Rover’s desire to underscore just how out-of-the-ordinary its new luxury sport-utility vehicle really is.  And I must say: point well made.

Before my off-road aviation encounter, of course, I was introduced to the 2014 Land Rover Range Rover Sport under more reasonable circumstances, in a town in Gloucestershire near the border with Wales.  Primed for a day of driving both the workaday motorways that crisscross England as well as the scenic – and not nearly wide enough – country roads that link one small town to the next, I slid behind the wheel of a Land Rover Range Rover Sport featuring a 510 horsepower, 5.0-liter supercharged V-8.  Also capable of generating a stout 461 lb-ft of torque, this engine rockets the SUV to 60-mph from a standing start in a mere five seconds, which is enough to put a long list of sport sedans on notice at the next red light.  Even the vehicle’s entry-level 3.0-liter V-6 is supercharged to deliver 340 horses and 332 lb-ft of torque, and while its exhaust note might be more refined than that of the brutal, child-stealing 5.0-liter, it offers substantial get-up-and-go that is in keeping with the role of the Sport as Land Rover’s quickest model.  An eight-speed automatic transmission is standard with either engine.

A major part of the 2014 Land Rover Range Rover Sport’s revitalized performance capability has to do with the fact that its heavy-breathing eight-cylinder engine no longer has nearly as much mass to move under full throttle.  Just under 800 lbs have been carved out of the large SUV’s spec sheet thanks to the transition from a steel body-on-frame architecture to a fully aluminum unibody design.  Not only do the weight savings improve acceleration, but they also allow the Range Rover Sport to take full advantage of its available adaptive suspension system which has been reconfigured for the new model.  Even when squeezed tight into a lane that was clearly designed with horses and not motorized vehicles in mind, the Land Rover demonstrates remarkable handling acumen for an SUV of its size.  This is especially true when considering body control, as the Sport demonstrates almost no tendency to roll from one side to the other when changing direction at speed.

The 2014 Land Rover Range Rover Sport wraps this impressive set of tarmac-friendly attributes in sheet metal that is unmistakably linked to the sibling SUV with which it shares its name, the pricier Range Rover.  Look closer, however, and you can detect the same guiding hand responsible for the design of the compact Range Rover Evoque, giving the brand three models brought together by moniker and styling but covering a very wide swathe of the market from a pricing perspective.  The Range Rover Sport’s passenger compartment is the definition of luxury, with excellent quality evident in the leather trim and upholstery and in the restrained use of plastics.  Cabin noise has also been reduced when compared to the outgoing model, which is yet another benefit of moving to unibody construction.

More second row passenger room is in the cards for the redesigned SUV, while an optional third row of seating that folds flat into the floor give the Sport its first crack at the seven passenger (or ‘5+2’ as Land Rover calls it) market.  A startling array of advanced driver technologies have been crowded onto the Range Rover Sport’s features list, included an automated parallel parking system, lane departure warning, a system of cameras that can automatically detect and display road signs on the vehicle’s gauge cluster LCD display, automatic high beams and adaptive HID headlights, a far-seeing blind spot monitoring system, and of course adaptive cruise control.

It should be pointed out that as impressive as the 2014 Land Rover Range Rover Sport’s ability to serve as an ultra-comfortable rapid transit system for as many as seven passengers is, a Land Rover isn’t really a Land Rover until it has earned its stripes far from the beaten path.  To prove that the Range Rover Sport wasn’t all about six-piston Brembo brakes and top-quality cow hides, I was lead through some of the most beautiful parts of Wales on my way to Eastnor Castle, which serves as the host for Land Rover’s intensive off-road driving academy.  It was here that the Sport proved its mettle by not flinching as it repeatedly forded through muddy, deep trenches filled with enough water to float lesser SUVs off of their axles.  The SUV clambered up the slick trails that lead in and out of these filthy holes with the kind of business-like detachment possessed only be true professionals.

The most indelible test of the 2014 Land Rover Range Rover Sport proved not to be found in the wilds of Eastnor, but rather within the confines of one of the world’s most iconic jumbo jet.  Parked at Cotswold Airport, its flying days a distant memory, the shell of the 747 mentioned in my opening paragraphs had been transformed by Land Rover into a kind of off-road funhouse.  Its cabin gutted of seats, the jet instead housed a set of off-camber ramps that had the Range Rover Sport virtually tipped on its ear immediately upon transition from the 70-degree ramp leading up to the rear cargo doors and into the dark confines of its fuselage.  Adding to the claustrophobia of driving a full-size SUV inside a passenger aircraft was the Land Rover Defender parked immediately to the right of the ramp, which was so close to the Brit-spec Sport as I moved past it that I could reach out the window and brush my fingertips across its sheet metal.

Which I would have done, of course, if I hadn't been so concentrated on not driving my 4,700 lb truck through the side of the aircraft.  Following the friendly, but concerned instructions of my Land Rover sherpa, I was guided to the set of uneven steel obstacles positioned just after the initial tilt-a-whirl, a setup that had the Sport tipping forwards, backwards, and side-to-side like I was flipping hydraulic switches.  Next up was a blind climb up to the second floor and cockpit area of the 747 – still intact – before plunging down a steep ramp out the gaping mouth of the aircraft and onto the tarmac, where I was directed to loop around to the side of the airplane and clamber back inside the front section, passing motocross-style underneath the original track I had just conquered.  I estimate that the Range Rover Sport was level for perhaps 15 seconds of my entire journey throughout the digestive tract of the jet.

And so ended my time with the 2014 Land Rover Range Rover Sport.  As we were loaded into our respective rides to the airport, where I would board a plane using my own two feet rather than 510 horsepower of supercharged fury, I gazed out the window back at the Boeing that had given up the sky so that I might use its once proud cabin as a type of mechanized jungle gym.  I then wondered what might be next on my childhood list of seemingly impossible dreams.  Jet pack?  Pet dragon?  As the folks at Land Rover would say, the adventure continues. 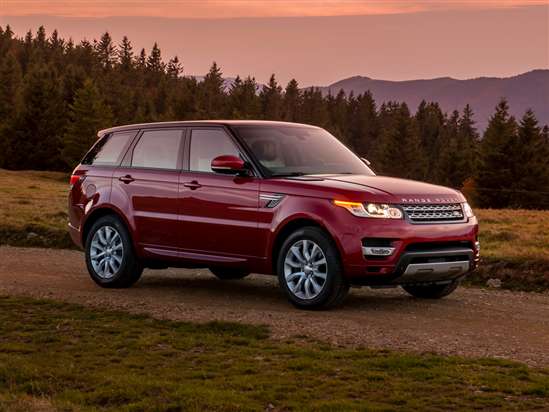