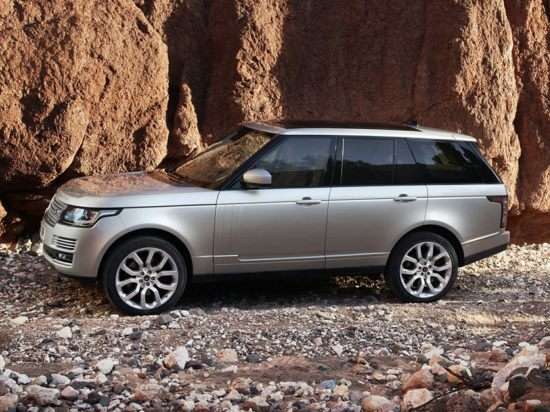 For 2014, the Land Rover Range Rover is offered in a new long-wheelbase model, the standard 5.0-liter V-8 engine is swapped out in favor of a new supercharged 3.0-liter V-6 engine with automatic stop/start technology, automatic stop/start is also added to the available supercharged 5.0-liter V-8, and all Range Rovers now have standard LED headlights. Other changes are limited to modified optional equipment availability and pricing, as well as added standard features for the Autobiography models. An ultra-exclusive Autobiography Black version of the new long-wheelbase model starts at more than double the price of the least expensive Range Rover.

The Range Rover’s new supercharged 3.0-liter V-6 engine develops 340 horsepower at 6,500 rpm and 332 lb.-ft. of torque between 3,500 rpm and 5,000 rpm, less than the outgoing 5.0-liter V-8 engine. However, fuel economy ratings improve by 3 miles per gallon, thanks in part to automatic stop/start technology that shuts the engine down when idling in traffic or at intersections. An 8-speed automatic transmission delivers power to all four wheels through a permanent 4-wheel-drive system.

Select a Range Rover with the supercharged V-8 engine, and you’ll enjoy 510 horsepower between 6,000 rpm and 6,500 rpm, and 461 lb.-ft. of torque between 2,500 rpm and 5,500 rpm. This engine gains automatic stop/start for 2014, but fuel economy ratings don’t budge. An 8-speed automatic transmission and 4WD are standard with this engine.

According to the EPA, the 2014 Land Rover Range Rover model’s fuel economy rating is 19 mpg in combined driving with the new supercharged V-6, and 15 mpg with the available supercharged V-8.

The Land Rover Range Rover has not been crash-tested by the National Highway Traffic Safety Administration (NHTSA) or the Insurance Institute for Highway Safety (IIHS). Neither is it likely to be, because these organizations primarily focus their resources on mainstream, volume-selling vehicles.

From its Intelligent 4WD system and Terrain Response 2 technology to its Adaptive Dynamics suspension with Dynamic Response, the 2014 Land Rover Range Rover is equipped with standard or available mechanical systems that allow it to conquer uncharted terrain, cross water up to three feet in depth, and cruise effortlessly down highways.

Additionally, the Range Rover is available with features such as Adaptive Cruise Control with Queue Assist, a Blind Spot Monitor with Closing Vehicle Sensing, Reverse Traffic Detection, a Lane Departure Warning system, and surround cameras providing up to 360 degrees of visibility. Buyers can also specify both Parallel Park and Perpendicular Park systems that steer the SUV into spaces while the driver operates the transmission and foot pedals. A Parking Exit feature assists the driver when leaving tight spaces.