Other Changes Announces for 2013 G Line-up

The entry-level Infiniti G has seen plenty of growth in recent years, but the 2013 model year will see a few versions of the car trimmed from the line-up. Now in its fourth generation, the Infiniti G has been around since 2007, and Infiniti is hoping that a few key changes can help keep the car competitive and selling well until the next-generation G debuts.

Looking to create a more efficient and more affordable entry model for the G Sedan line-up, Infiniti introduced a lower-displacement model of the car in 2011 called the G25. After only two years on the market, it's clear that the marginal gains in fuel economy were not worth the massive sacrifice in power since the Infiniti G25 Sedan will not be returning for its junior year. The smaller V-6 used in the G25 produced just 218 horsepower and 187 lb-ft of torque (versus the G37's 328 hp and 269 lb-ft) while only slightly outperforming the G37 in fuel economy with EPA estimates of 20 miles per gallon in the city, 29 mpg on the highway and a rating of 23 mpg in combined driving (versus the G37's 19/27/22 numbers). The biggest advantage the G25 model gave Infiniti was a starting price lower than rival cars such as the Mercedes-Benz C250 and Cadillac CTS, but so far the new pricing for the 2013 Infiniti G Sedan has not been announced. In 2011, the G25 Sedan replaced the G37 Sedan base model, so it is possible that a new trim level could be added below the G37 Sedan Journey to make up for any pricing disparity. The 2013 Infiniti G37 Sedan goes on sale in September, but the 2012 Infiniti G25 Sedan will continue to be offered until December.

The sporty 2013 Infiniti G37 Coupe will also be getting a noteworthy line-up change for the new model year with the car no longer offering a base model. One of the biggest downfalls of the 2012 G37 Coupe base model was that there were no optional packages available, but the now-entry-level G37 Coupe Journey model added standard luxurious features such as heated front seats, dual-zone automatic climate control, Infiniti's RearView Monitor backup camera, Bluetooth hands-free phone connectivity and a USB port for iPod connectivity (this equipment list is all for the 2012 G37 Coupe Journey). With the base model being dropped, the new starting price for the 2013 Infiniti G37 Coupe will now be $39,800 which represents a $2,000 increase of the starting price of the 2012 G Coupe; this new starting price does not include the $895 destination charge. The 2013 Infiniti G37 Coupe is already on sale.

Other changes to the 2013 Infiniti G37 Coupe include new interior colors and trims. The Wheat interior hue is no longer available, and the Stone interior now gets Graphite accents. Sharp eyes will also notice that the Shodo aluminum accents have been replaced by the Silk Obi aluminum trim. 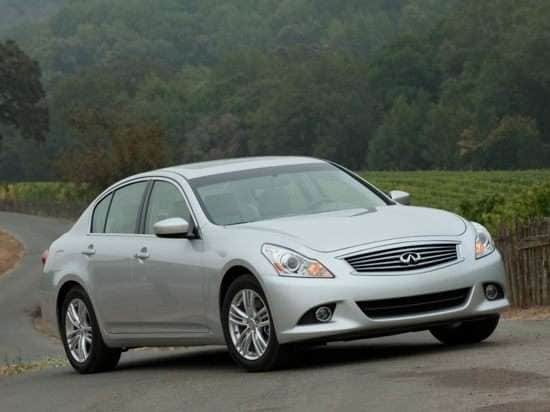