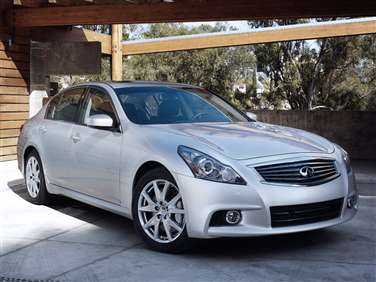 All About Infiniti G37

Arguably the car responsible for turning Infiniti’s fortunes around, the Infiniti G37—in many ways—has become the de facto face of the brand.

Nissan created Infiniti from scratch back in 1985 as a new kind of performance luxury brand for the U.S. market. To accomplish this, a group known as the Horizon Task Force was formed within Nissan to develop the parameters within which the brand would function.  More than just a new kind of car for the company, the goal of Infiniti was to also introduce an exceptionally service-oriented ethos when it came to the customer’s purchase and ownership experience.

Unfortunately, this message was never properly conveyed. The Infiniti brand was launched with advertising that ultimately became the textbook example of how NOT to introduce a new automobile to the marketplace. In its quest to convey the newfound attitudes customers would encounter at Infiniti dealerships, the introductory campaign was devoid of any mention or images of the cars. Instead it focused on a Zen-like discourse on running water, ripples in a pond and haystacks in a field.

The brand soldiered on, but it wasn’t until the introduction of the 2003 Infiniti G35 the marque really took off. Based on Nissan’s front-midships platform (shared with the Nissan 350Z), the G35 was in essence a front mid-engine sedan. Buyers liked its handling and performance; enthusiast magazines declared it a reasonable substitute for BMW’s 3 Series, and the car sold extremely well.

A G35 coupe followed, aligning the car even more closely with the trajectory of the BMW 3 Series product strategy. The G35 Coupe was basically a more luxurious Nissan 350Z so it performed extremely well. These developments finally brought the promise of the Infiniti brand to fruition and customers responded well to it. Particularly once they discovered the original Infiniti customer service philosophy was still intact (which was something completely new to most of the buyers brought in by the G cars).

With a displacement increase, the G series cars became known as the Infiniti G37, which by this point was offered in coupe, sedan and convertible forms. In order to lower the price of entry a bit, Infiniti also introduced a smaller displacement version of the sedan, which it dubbed the Infiniti G25. Going in the 2014 model year, the brand has realigned its model nomenclatures. The G model sedans will be known as the Infiniti Q50, while the coupes and convertibles will be referred to as Q60s. However, the current 3.7-liter G37 sedan models will continue to be produced alongside the Q versions of the car through model year 2015.