Were the subject of this 2015 Ford Focus road test and review a person, it would be the one exceptionally ell-rounded individual people think of as having “it all”. Think about it; the Focus offers an athletic driving experience, decided frugality in terms of its pricing structure and fuel consumption, considerable intelligence in terms of its tech quotient, and a stylish—yet down to earth appearance.

Now that we think about it, if the Ford Focus really were a person, a lot of people would probably be hating on it because it’s so cool.

A true world car in every sense of the phrase, Ford offers the Focus, or some version of the Focus, in pretty much every market in which the company does business. In fact, back in 2012, the Ford Focus surpassed the Toyota Corolla to become the world’s best selling nameplate, and has remained so for each of the ensuing years

Thoroughly made over for the 2015 model year, Ford’s Focus got new exterior styling, a revised interior treatment, new infotainment and safety systems, as well as a new ultra-efficient engine option. In other words, all of the qualities we listed above have been improved upon with this latest iteration of the car Ford introduced back in 1998.

For the 2015 model year, Ford is offering the Focus in both sedan and hatchback body styles, and in three primary trim levels—in addition to the high performance Ford Focus ST and the Ford Focus Electric—both of which are reviewed separately here on the Autobytel Website.

Updating the appearance of the Ford compact are a redesigned hood, grille, and trunklid (for sedans). LED signature lighting further delineates the new model. The new grille brings Focus more into line with the current front-end treatment being applied to Ford’s passenger cars, “borrowing” the look previously exclusive to models from Aston Martin.

Essentially, the entire front fascia is new, this includes all of the lighting instruments, the fenders, and, as we said before—the hood. The Ford logo has also been resized and relocated At the rear of the car, the license plate mounting area has been reshaped, and the hatchback gets new rear lamp clusters to inform the going away view of the Ford.

All in all, the Focus now looks more grown up and sophisticated, though some may bemoan the departure of the playful personality the previous styling treatment conveyed. Long story short, the new look gives the Focus a more “adult” appearance.

The interior treatment has also been treated to a streamlining, giving a much less “busy” appearance. The steering wheel’s three-spoke design is new and the center stack is considerably slimmer than before. Gratefully, the design of the lower-level Focus models relies upon dials and buttons in the center stack rather than the MyFordTouch system fitted to upper-level models in the Focus lineup.

No, we’re not terribly fond of MyFordTouch, and we have no qualms about saying so. Yeah, it looks cool, but in operation it’s just too tedious. Nothing beats pressing a button to activate your desired function and rotating a dial to get the intensity you require just right.

We do like the touchscreen MyFordTouch brings to the interior though, so we’re in something of a quandary in that regard. We’re also fond of the outstanding features hi-tech Focus offers—including its rear-view camera, blind spot monitoring, rear cross traffic alert, and lane keeping assist.

The Focus also features Ford’s new SYNC AppLink. Integrating your smartphone into the car’s telematics system, notifications are read aloud as you enter the Focus, with no need to touch the phone. Alerts are available any time a mobile device is connected to SYNC AppLink, even if the app is not currently active. This means you could get an alert about traffic jams ahead on your route while listening to the radio or using an entertainment application such as Pandora.

Among the other things we appreciate about the interior of the Focus are its quiet and good-looking natures. Further, the fit and finish of the materials employed are first rate. Don’t get it twisted now, while there’s no mistaking the Focus for anything other than the economical compact it is, the overall vibe of the interior hints at concern in terms of the way it is assembled. Oh, and getting back to the SYNC system for a moment, the presence of voice activation in this price category is a remarkable thing.

We’ve already covered the center stack, so we won’t digress, however the front seats are more than up to the task at hand in terms of providing competent support and ease. Front seat passengers enjoy a great deal of both comfort and legroom. Rear seat passengers will have adequate headroom despite the Ford’s sloping roofline, but legroom is sacrificed to the Ford’s diminutive overall size.

While crash test scores for the 2015 Ford Focus have yet to be issued by the Insurance Institute For Highway Safety (IIHS) and NHTSA, the 2014 version of the car scored Top Safety Pick status with the IIHS and a five-star overall rating with NHTSA.

Standard safety features of the 2015 model include driver and passenger airbags, a driver’s knee airbag, and side curtain airbags. Antilock brakes are also standard equipment, but if you want four-wheel discs you have to get into a Titanium model. Traction control, stability control, brake assist, child safety locks, and tire pressure monitoring are standard features as well. Another feature of the SYNC system is automatic crash notification.

Ford’s MyKey system will mute the radio if the car is driven without the seat belts fastened. It will also allow the car’s owner to limit the Ford’s top speed to a choice of 65, 70, 75, or 80 miles per hour—with chimes sounding at 45, 55, and 65 mph. MyKey also enables the blocking of any satellite radio stations classified as explicit.

The primary engine offered with Focus is a 2.0-liter four-cylinder delivering 160 horsepower and 146 ft-lbs of torque. Focus S and Focus SE get five-speed manual transmissions as standard equipment, while a six-speed automated manual is offered as optional equipment with those trim packages. The six-speed is standard equipment with Titanium fitted Focus models. All Focus models employ front-wheel drive.

The other engine offering is a 1.0-liter three-cylinder turbocharged powerplant fitted to the Focus SE EcoBoost model. This engine delivers 123 horsepower and 148 ft-lbs of torque. Ford’s engineering team specified a six-speed manual transmission for this engine. This actually marks the second application of the 1.0-liter EcoBoost engine for the U.S. market, as it is also fitted to the Fiesta.

Don’t let the new, more conservative styling fool you, Focus is still a lot of fun to drive. Yes, the ST version of the Focus is even more powerful and considerably more engaging than the standard Focus models, but let’s not forget the basic platform of the Focus ST is still the Focus. With that said, you’ll find commendable agility, coupled with a quiet and smooth ride. This comes along with nicely accurate steering and more than sufficient braking power—even in Focus models equipped with rear drum brakes.

With the manual transmission, the 2.0-liter inline four winds freely, emitting just enough of a growl to make running it to redline a worthwhile exercise. Thrust is reasonably good, if not exactly eye opening, but the beauty of the Focus is you don’t really need to be going superfast in it to feel engaged. Like so many well-sorted small cars, the Focus is great fun to drive fast—slowly. In other words, you can tear into corners, relying upon the tenacity of the little car’s roadholding to deliver an abundance of visceral entertainment.

With the 1.0-liter turbo, you’ll be fascinated an engine so small can provide so much amusement, while simultaneously returning outstanding fuel economy. If you doubt the ability of a three-cylinder turbocharged engine to deliver, might we remind you this is precisely the same configuration found in the awe-inspiring BMW i8 (albeit supplemented by an electric motor). Further, Mini’s Cooper also runs a small-displacement turbocharged three cylinder.

The automated manual transmission equipped Titanium models shift smoothly, and their programming seemingly always finds them in the right gear for the task at hand. All in all, Ford’s Focus remains one of the most engaging models in its competitive set. When you consider this includes such standouts as the Volkswagen’s Golf and the Mazda3, you’re looking at a rather significant statement.

While we have a great deal of praise for Ford’s economical compact, we have taken note of a recurring issue popping up quite frequently in the Ford Focus owner’s forums on the ‘Net. There seems to be quite a bit of mention of transmission problems with the six-speed automated manual in the 2014 model. The issue seems to be centered around leaking clutch input seals. While we saw no hint of anything untoward in our testing of the 2015 Focus, it does show up in enough different forums to where we’d feel remiss if we didn’t mention it. 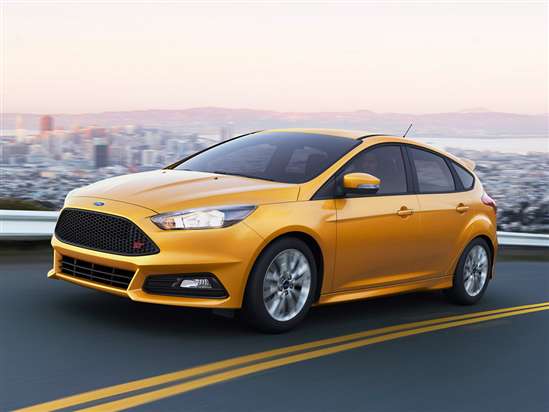