You might think that the 2017 Chrysler 300 is getting a little gray around the temples. After all, 2017 marks its 13th model year without a major update. That first iteration of the current generation 300 back in 2005 impressed with its long dash-to-axle rear-drive proportions, muscular flanks, and big, Bentley-on-a-budget egg-crate grille. And its solid body structure and Mercedes-Benz E-Class-derived chassis, which Chrysler has improved and evolved over the ensuing decade, delivered a pleasing over-the-road dynamic that had been largely absent in big American sedans for decades. Nevertheless, 13 years is a long time.

While the 300 projects an aggressive appearance on the outside, the cabin is all business-class comfort. Extra-thick acoustic glass in the windshield and front doors help tone down the cacophony of a noisy world. Traditional elements like standard leather seating, French stitching on the doors, console, and seats, and an elegant analog clock at the top of the dash mix with digital-age Uconnect infotainment, touchscreen controls, LED-illuminated cup holders and push button start. It’s a comfortable place to spend time with well-bolstered, heated front seats with power lumbar adjustment and loads of spread out space. The 300C and 300C Platinum adds front seat ventilation as well.

The Chrysler 300’s long wheelbase aids rear seat roominess. While the 300 is no limo, there’s ample rear seat legroom and headroom. Four adults can travel in comfort, five in a pinch with the middle rear passenger straddling the front seat console. The rear seat is split 60/40 and folds down to enable long items, such as skis and step ladders, to fit in the trunk. On 300C and 300C Platinum models, the outboard rear seat cushions are also heated. The padded fold-down center armrest features LED-illuminated cup holders (just like in the front) and a storage compartment.

Whether you play golf or not, take a look at the 300’s 16.3 cubic-foot trunk. Not only is it big, but with a large opening and uncomplicated, squarish shape, it can accommodate a broad range of cargo. Folding rear seatbacks add even greater flexibility for carrying longer objects. The trunk-mounted Beats audio system subwoofer, part of a 552-watt, 10-speaker system standard in the 300 S and optional in the base Limited, is tucked away neatly in one corner.

Hop in, close the substantial-sounding door, and sink into the seat. With tall doors and an upright dashboard, you get the sense that there’s plenty of substance and sheet metal between the people space inside and the world outside. The tall beltline combines with a formal roofline making for a very private space and less window area than on some other big sedans.

Feel too cloistered? The 300C and 300C Platinum models bring a standard, double-pane panoramic sunroof that opens to the sun—or stars—at the flick of a switch. It’s optional on all other 300 models as well.

All 2017 Chrysler 300 models come standard with a 3.6-liter Pentastar V6 and rear-wheel drive. Pumping 292 horsepower (300S models up that number to 300 hp), that’s good for a 0-60 time of just over 6 seconds on regular unleaded gas. It’s enough power to exercise the 300’s excellent chassis. All-wheel drive is optional only on V6 models, putting the Chrysler 300 on the consideration list for buyers in regions that experience snowy, icy winter weather. Fuel economy is decent for a large car, 19 mpg city/30 mpg highway for rear-drive models and 18 mpg city/27 mpg highway for AWDs.

For a bit more spring in the 300’s step, the 5.7-liter HEMI V8 is a $3,000 upcharge. It's 363 horsepower drops 0-60 dashes to the mid- 5-second range and introduces just enough exhaust burble to give the 300 the kind of authority to go with its aggressive looks. The HEMI V8 includes a feature that idles four of the eight cylinders during low-load steady-state cruising or coasting to save fuel. It’s so seamless you'll likely not notice the switch to 4-cylinder power, except for a slight change in the exhaust note. No worries, though, as full V8 power is available the moment you tip into the throttle. Midgrade unleaded is recommended for best performance although regular unleaded is acceptable. EPA estimates are 16 mpg city/25 mpg highway.

If you haven’t driven a new car in several years, be prepared for a surprise when you change gears in the new 300. As with many other carmakers, Chrysler has moved to an 8-speed automatic transmission. This gives the engine a wider range of gears to work with—lower lows and taller overdrive gears—to help keep the engine operating in a speed range that makes it more efficient and responsive. The twist is the shifter itself, which has changed in recent years from a shift lever that you moved forward and back to a knob you rotate. It takes up less space on the console, and once you get used to it, it can shift between Park and Drive and Reverse just as quickly. Most 300 models also include steering-wheel paddle shifters that allow the driver to manually step-shift the gears one at a time with thumbs.

The 300’s power rack-and-pinion steering, now electrically boosted instead of hydraulically boosted for less drain on the engine and better fuel economy, feels naturally weighted—not too light or too heavy—going down the highway.

There are four suspension tunes: extra supple Comfort for the 300C, nicely balanced Touring for the 300 Limited, 300C Platinum and all-wheel-drive variants, firmer Sport for the 300S and still-firmer optional Performance also for the 300S. Each of the suspension packages, while slightly different, deliver a well-damped ride with good body control and in keeping with the 300’s dignified character, none allow harsh impacts to upset the premium sedan’s composure—even with the 300’s biggest available 20-inch wheels and low-aspect-ratio 245/45 R20 performance tires.

Tipping the scales at over two tons, the 300 is a big car. You feel it when you step on the brake pedal in haste or decide to change headings abruptly. But just as the 300’s design drapes its muscularity in a Brooks Brothers suit, the big Chrysler’s well-balanced chassis—with only about 52 percent of that weight over the front wheels—takes direction surprisingly well.

The Chrysler 300 may exude a classic retro vibe, but it’s no Luddite in the tech department. The 300 now offers a dash mounted Sport button that the driver can push to quicken throttle response, shave hundreds of milliseconds off transmission shifts and firm up steering effort for more aggressive driving. At the other end of the spectrum, blind-spot and rear cross-traffic alert systems are available to give drivers eyes in the back of their heads. And a SafetyTec Plus package updates the 300 with adaptive cruise control with full stop, forward collision alert with active braking, rain-sensing wipers and lane-keeping assist. 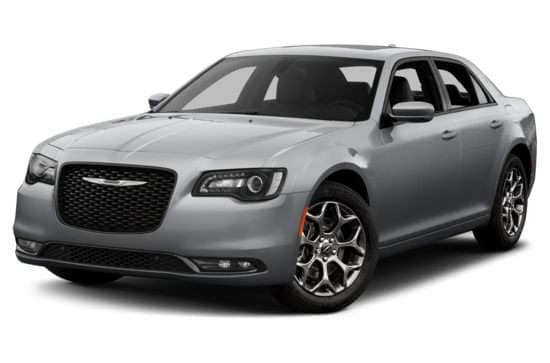