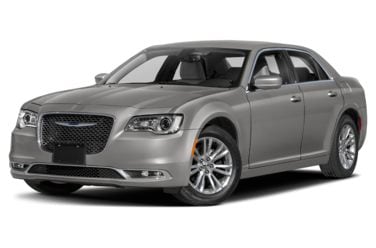 The Chrysler 300 is a four-door, five-passenger full-size sedan. The Chrysler 300 is manufactured in Brampton, Ontario, Canada alongside the Dodge Challenger and Dodge Charger. When Chrysler and Daimler, the parent company of German automaker Mercedes-Benz, merged in the early 2000’s there was a lot of technology sharing back and forth between the two companies. Chrysler in particular was able to benefit from access to several previous generation Mercedes platforms and create one of their most critically successful vehicles of the decade, the 300. Based on the rear-wheel drive Mercedes E-Class platform of the late 1990’s, the 300 was a turning point for Chrysler in re-capturing a significant portion of the full-size domestic sedan market.

The 2008 Chrysler 300 comes in several different trim levels. The LX is the base model, and it is outfitted with a 2.7 liter V6 engine which uses dual-overhead camshafts to make 178 horsepower and 190 lb-ft of torque. Stepping up to the Touring, Signature Series or Limited trim levels equips the car with a larger, 250 horsepower 3.5 liter V6 engine. Standing at the top of the power ladder is Chrysler’s famous Hemi 5.7 liter V8, which produces 340 horsepower and 390 lb-ft of torque in the 300C. Most versions of the car can be equipped with all-wheel drive, and each V6 is paired with a 4-speed automatic transmission. The V8 is only available with a 5-speed auto.

The 300C is the best equipped version of the vehicle, and in addition to the highlights from the Limited it has fold-away power mirrors, further stereo upgrades, larger brakes, rain sensitive windshield wipers, and a more aggressive exterior appearance. This includes body-colored trim panels, a dual exhaust and special badging.

There are three special editions of the 300: the DUB package, the Walter P. Chrysler Executive Series 300C and the 300C SRT-8. The DUB package raises the curb appeal of the sedan by adding 20-inch wheels, a special mesh grille, and an enhanced multimedia entertainment system. The Executive series is essentially a stretched version of the sedan aimed at competing with fleet vehicles such as the Lincoln Town Car and the Cadillac DTS. The SRT-8 is the real gem of the three, as it replaces the already potent 5.7 liter HEMI with a 6.1 liter version which produces 425 horsepower, giving the sedan sports car acceleration. The SRT-8 is also outfitted with a much stiffer suspension so that drivers can make the most out of the extra power.

The Chrysler 300 is an excellent, attractive choice in a field of somewhat bland full-size sedans. The vehicle boasts great driving dynamics, spacious interior room and excellent trunk capacity, making it perfect for families or those who frequently take long highway trips. The available V8 power places the 300 head and shoulders above its domestic competitors, and the rear-wheel drive platform also helps cement its spot at the top of the American sedan market.

The 2009 Chrysler 300 is a carryover from 2008. There are many different trims available for the four-door sedan, starting with the Touring, which is powered by a 2.7 liter V6 engine that generates 178 horsepower and 190 lb-ft of torque. This motor is matched with a 4-speed automatic transmission and is rated at 18 miles per gallon in city driving and 26 miles per gallon on the highway. The next three trims, the Touring Signature Series, Touring Walter P. Chrysler Executive Series and the Limited are all outfitted with a 3.5 liter V6 engine that provides 250 horsepower and 250 lb-ft of torque. This larger motor turns in fuel economy numbers of 17 miles per gallon around town and 24 miles per gallon in highway cruising. A 4-speed automatic is also standard equipment.

The 300C, 300C Heritage Edition and 300C Walter P. Chrysler Executive Series all make use of a 360 horsepower 5.7 liter Hemi V8 that also makes 390 lb-ft of torque. A 5-speed automatic transmission handles gearshifts, with the option of a 5-speed Autostick option. Cylinder deactivation technology renders fuel mileage of 15 miles per gallon in city driving and 25 miles per gallon on the highway. The very top of the performance line is the SRT-8 edition of the 300C, whose engine bay houses a 6.1 liter Hemi V8 engine which offers 425 horsepower and 420 lb-ft of torque. Fuel mileage is 13 miles per gallon in the city and 19 miles per gallon on the highway, and the Autostick transmission comes as standard equipment. The Touring Signature Series, Limited and 300C trim packages also offer the option of all-wheel drive.