10 Things You Need to Know About the BMW 530e Hybrid

BMW is in the hybrid business big time. According to the company, it’s now the third largest supplier of electrified cars in the world.

In America, the German luxury brand markets an extensive list of hybrids, including the i8 supercar that costs about $150,000 and the quirky i3 hatchback. But there are also many hybrid versions of mainstream models in BMWs extensive lineup, including electrified version of the 3 Series, 7 Series, and X5 SUV. Well, now you can add the 5 Series to that list.

The new 2018 BMW 530e iPerformance is a plug-in hybrid version of the hugely popular BMW 5 Series. Read on to learn 10 things you need to know about this brand new vehicle.

1) Wireless Charging will soon be available.

1) Wireless Charging will soon be available.

Wireless charging is already part of the optional Premium Package and BMW expects it to be a popular option. Unfortunately, the charging pad itself is still in the prototype stage of development, although BMW says it to be approved for production soon. When it’s available, owners will park their 530e sedan over the pad, which generates an alternating magnetic field with a secondary coil housed in the underside of the car. The two never touch. BMW says the system can be installed indoors or out and the charging time is about 3.5 hours.

BMW’s plug-in eDrive system is now used across much of the German brand’s lineup, including the 3 Series, 7 Series, and X5 SUV. It combines a turbocharged and direct injected 2.0-liter four cylinder gas engine with an electric motor and a small 9.2 kWh lithium-ion battery pack. In the 530e sedan, the engine is rated 180 hp and 236 lb-ft of torque, but the motor adds 111 hp and 184 lb-ft, for a combined output of 248 hp and 310 lb-ft. That quite a bit less than you get in the larger and heavier 7 Series and X5, but it matches the system’s output in the 330e.

To save weight, BMW has eliminated the torque converter from the ZF-supplied 8-speed automatic transmission. Instead, the engineers placed the electric motor upstream of the transmission so its ratios are used even in all-electric mode. It’s a nifty trick and gives the 530e a very different feel than other EVs like a Tesla Model S.

BMW claims a 0-62 mph acceleration performance of just 6.2 seconds. Although that quite a bit slower than the Tesla, it’s close to the 5.8 second claim for a 530i xDrive. Top speed is 146 mph.

3) Drivers can select between many operating modes.

3) Drivers can select between many operating modes.

Each operating mode changes the readiness and involvement of the gas engine. The usual BMW Driving Dynamics Control with Eco Pro is the default mode, and Comfort and Sport settings are also available. In Sport mode, the gauges are lit red and the engine is always adding power. Use the standard paddle shifters and the 8-speed automatic transmission matches revs on the downshifts just as it does in a gas-only powered 5 Series.

With the eDrive button, you can toggle between an auto eDrive setting, max eDrive, and battery control modes. The default auto eDrive optimizes the interaction between the engine and motor, depending on the driving environment. Max eDrive is max electric power only, but the gas engine will fire if you press through a detent in the throttle’s travel. Battery control mode saves the battery charge for later to a determined level, or even charges the batteries as you drive.

BMW worked hard to keep the 530e from feeling like a luxurious golf cart. After all, that just wouldn’t work for the company’s "Ultimate Driving Machine" image. This is partially achieved by the sedan’s surprising lack of hard regenerative braking like you’ll find in most electrified cars, including the Tesla and the Cadillac CT6 Plug-in. Come off the throttle and the 530e coasts freely, just as you would expect in a gas-only 5 Series. The system still harnesses the energy created by the brake system and sends it to the battery pack mounted under the rear seat; it just accomplishes this without intruding on the driving experience.

5) It can drive 31 miles without burning gasoline.

5) It can drive 31 miles without burning gasoline.

Full range for the 2018 BMW 530e is about 400 miles. Most of that is achieved by burning a combination of gasoline and electricity, but the sedan will travel about 30 miles on electric power alone up to speeds of 87 mph. This is impressive, the EV range of both the Mercedes-Benz S550e and the BMW 740e is just 14 miles.

If you floor the gas pedal the BMW’s 2.0-liter will still join the party, but the turbo engine is so quiet and turns on and off so smoothly you don’t feel the transition. If you keep your throttle inputs under control and your commute is short enough, the BMW’s gasoline engine should never turn on, and the 530e would function as an EV indefinitely.

Charging the BMW’s 9.2 kWh lithium-ion battery pack is as easy as plugging in your iPhone. The sedan’s battery system can be charged using an 110V or 220V charger and will charge in approximately 3 hours on the latter voltage and under five hours on a standard 110v wall socket. The charge port mimics the car’s traditional gas filler door; only it’s on the left front fender. It’s stealthy, but I like the way Cadillac does it better; On the CT6 Plug-in, the port is on the driver’s quarter panel, which mimics the gas filler door on the opposite side. The uniformity from side to side gives the Cadillac a cleaner appearance.

7) The trunk is smaller.

7) The trunk is smaller.

Although the BMW’s battery pack is cleverly packaged within the standard 5 Series chassis, it does intrude on the sedan’s trunk space. Cargo volume drops from 18.7 cubic feet to 14.5, but it’s still more than you get in a standard 3 Series. Pop the trunk, and you’ll notice the difference. The good news is BMW managed to retain the split fold down rear seat, which is rare in hybrid sedans. Your golf bag will fit.

In most situations, you would never know this sedan has two powertrains continually working together to get you down the road. Although weight has increased to 3,900 lbs, BMW has brilliantly masked the additional 150 lbs.

The ride is plush, and the extra weight in the rear has improved the sedan's balance. That weight also lowers its center of gravity. In a rear-wheel drive 530e (all-wheel drive is available for $2,300) l was able to keep a swift pace through some twisting secondary roads south of Salzburg, Austria and in a freezing rain on an extensive section of Autobahn 8 east of Munich. I was impressed by the car's ability to get to 130 mph so quickly.

9) It costs much less than the competition.

9) It costs much less than the competition.

Every safety system available on the standard 5 Series is offered on the 530e plug-in. This includes cross traffic warning, Lane Change Assistant, and Active Lane Change Warning, which will steer the vehicle for you to help avoid an accident.  Adaptive Cruise Control is also an option, along with blind spot alert and a pre-collision system with pedestrian detection that warns you if vehicles and pedestrians are in your path. It will also automatically begin braking in a low-speed situation if the system believes an accident is imminent.

Other safety related technology include optional side and top view cameras that provide a detailed overhead view of the vehicle and its surroundings, a rear view camera, and Parking Assist sensors in the front and rear bumpers. 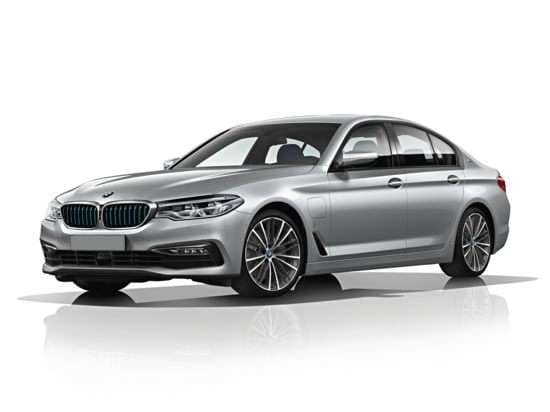