Still though, no matter how much the car buying public tried to avoid the station wagon, the genre of car offers efficiencies minivans, SUV’s and crossovers can’t touch. (Cue M.C. Hammer please…) Providing extra carrying capacity while still driving and feeling like a car was (and is) a significant advantage when compared to those larger styles of vehicles. Ease of parking and superior fuel economy are two other distinct advantages.

In fact, as SUVs evolved into crossovers, they ironically began to mimic the virtues of the station wagon, more and more while trying to continue to look like SUVs. In other words, get over folks; there are some things your parents got right. One of them was choosing a highly efficient car with extra cargo capacity, over a hulking four-ton truck-based urban assault vehicle with four-wheel drive, low range gearing and huge ground clearance—just to take little Cody to soccer practice.

That said, we’d be the first to acknowledge the benefits of all-wheel drive. Superior traction in inclement conditions being first and foremost among those benefits—particularly when talking about a family car. However, all-wheel drive also delivers another advantage, it can make a car big fun to drive. Perhaps this is why five of the entries on our list of the 10 best all-wheel drive station wagons are performance oriented, with two of them even offering extremely high performance versions.

The 2012 Audi A4 Avant Quattro is exclusively powered by a 211-horsepower, turbocharged 2.0-liter four-cylinder engine, which produces a remarkable 258 ft.-lbs. of torque. And while you may have been trained to believe it’s all about horsepower, the truth of the matter is it is torque you feel when you nail the throttle from a standing start. In other words, when it comes to acceleration, you want a big torque number—and the 2012 Audi A4 Avant’s turbo four delivers. Combine this with the advanced Quattro all-wheel drive powertrain fed by an eight-speed automatic transmission and you got a good-looking car that’s capacious, as well as fun to drive and fuel-efficient too. Factor in the sleek exterior of this pick for our list of the best AWD station wagons, along with the delectable interior treatment each of the cars from Ingolstadt boasts and you’ll have a very compelling reason to step away from the keys to that SUV, turn around and run quickly to your Audi dealer.

When it comes to sheer driving pleasure, very few automotive marques have the market cornered the way BMW does. This is due in large part to the exceptional dynamics of its most popular car line, the 3 Series. For 2012, BMW makes our list of the best AWD station wagons with its 328i Wagon. The 328i Wagon uses a 230-horsepower, 3.0-liter inline six-cylinder engine that produces 200 ft.-lbs. of torque. A six-speed automatic transmission and all-wheel drive complete the powertrain. The 328i Wagon, while providing the extra carrying capacity behind the back seat you expect from a station wagon, drives pretty much exactly like the 328i Sedan does. In other words it delivers excellent steering feel, tenacious cornering, resolute braking and an overall confident feeling as it goes down the road.

Interestingly, while the American car market once dominated the station wagon field, there was never a Cadillac station wagon (okay, that wasn’t a hearse) until 2010. Graced with the elegant interior treatments for which Cadillac have long been known, the 2012 Cadillac CTS Sport Wagon also comes with a very generous array of contemporary technological features, outstanding handling, and of course considerable utility—thanks to the extra cargo space afforded it by being a station wagon. Both engine choices for the CTS Sport Wagon are offered with all wheel drive. The CTS 3.0 Sport Wagon comes with a 270-horsepower, 3.0-liter V6 producing 223 ft.-lbs. of torque. The CTS 3.6 models get a 318-horsepower, 3.6-liter V6 with 275 ft.-lbs. of torque. Both engines are mated to a six-speed automatic transmission.

When the product planning team at Ford realized they could not be competitive in the minivan segment, they set out to create something completely new and different. With the Ford Flex, they were going the profile and tall seating position of an SUV, with the flexible three-row seating arrangements and carrying capacity of a minivan. Proving once and for all that every thing old is eventually new again; after weeks, months, and even years of planning, computer assisted designs and market studies they finally unveiled their wholly original and highly innovative new creation. It was a tall station wagon. To its credit, the Ford Flex is packed with creature comforts and an abundance of high-tech telematics. It even offers an optional refrigerator. The 2012 Ford Flex also comes standard with a 262-horsepower, 3.5-liter V6 delivering 248 ft.-lbs. of torque. A six-speed automatic transmission completes the powertrain of this pick for our list 2012 AWD wagons.

To save us a bunch of writing, please see the Ford Flex entry of our list of the best AWD station wagons for the broad details. The Lincoln and Ford are basically the same car. To get from Flex to MKT add a more luxurious interior treatment along with a 355-horsepower, twin-turbocharged 3.5-liter V6 making 350 ft.-lbs of torque. Just as with the Ford Flex, a six-speed automatic transmission routes the Lincoln’s power to all four wheels. BTW, the MKT is the company’s first station wagon, although they’ll never call it that in print anywhere. Nevertheless, the Lincoln MKT—like its Ford Flex sibling upon which it is based—is one of our picks for the 10 best all-wheel drive station wagons for 2012.

As you might well expect, the Mercedes-Benz of station wagons is powerful, luxurious, robust, and gracefully stylish. In other words, it’s a natural fit for our list of the best all-wheel drive station wagons. Packed with all the goodness of the E Class sedan, the Mercedes-Benz E 350 4Matic Wagon’s gracefully angular profile is radiant with tastefully chiseled detailing. Additionally, its beautifully executed interior treatment is simultaneously business-like and luxurious. Plus, the driving experience is nearly exactly like that of the sedan’s. Capable of seating seven, from behind the wheel of the 2012 Mercedes-Benz E 350 4Matic Wagon the only way you can tell you’re driving anything other than a standard Mercedes E Class sedan is to look over your shoulder. Power comes from a 302-horsepower, 3.5-liter V6 that produces 273 foot-pounds of torque. A seven-speed automatic transmission routes the output of the engine to all four wheels.

While the brilliant members of the marketing team at MINI works overtime to convince the buying public the Countryman S ALL4 is MINI’s crossover utility vehicle, the fact of the matter is the Countryman is MINI’s station wagon. But that’s OK, because it’s a really, really, really good station wagon. Quick and nimble the way you expect a MINI to be, the Countryman S ALL4 is also deceptively spacious, quite fuel efficient, and houses a remarkably flexible interior configuration. With all of that going for it, of course the largest MINI model makes our list of 10 best all-wheel drive station wagons for 2012. The nearly infinitely repositionable rear seat is what gives the Countryman its versatility. It slides back to make more legroom for rear passengers, slides forward to make more room for cargo, or folds completely flat to convert the entire area into cargo space. Meanwhile, all of the cool you’re used to finding in a MINI is present and accounted for as well. The 2012 MINI Countryman S ALL4 uses a turbocharged 1.6-liter inline four-cylinder engine, which produces 181 horsepower and 177 ft.-lbs. of torque. A six-speed manual transmission is standard equipment, while a six-speed automatic is optional.

Recognizing the trend they were up against at the height of the SUV boom of the waning years of the 20th century, the folks at Subaru decided to SUV-itize their excellent Legacy station wagon. They raised its ride height, fitted it with a set of mud and snow tires, shielded its fragile bits, and gave it a name they hoped would evoke a sense of outdoor adventure. Then, they went out and hired the Australian action movie actor Paul Hogan to serve as a pitchman in order to lend it an aura of authenticity. That the Outback was singularly successful was more of a testament to the overall goodness of the basic platform than it was to the idea a jacked up Subaru station wagon could ever pass for an SUV. The 2012 Outback 2.5 is powered by a 170-horsepower, 2.5-liter horizontally opposed four-cylinder engine, which makes 170 ft.-lbs. of torque. The transmission choices for the 2.5 are a six-speed manual and a Continuously Variable Transmission (CVT). The more upscale Outback 3.6R comes with a 256-horsepower, 3.6-liter horizontally opposed six-cylinder engine, good for 247 ft.-lbs. of torque. A five-speed automatic transmission with shift paddles is the only gearbox offered with this version of the Subaru all-wheel drive station wagon.

Toyota’s Venza is basically a Camry station wagon on steroids. Now before you regard that as a dismissive statement, think for just a moment about how good the Camry really is. We’re talking about a car that routinely sells 400,000 copies a year. Now, imagine putting that car on steroids—yeah, not so funny anymore is it? Based on the Camry’s platform, the Venza takes all the best features of a minivan, combines it with the profile of a crossover utility vehicle, and maintains the ease of entry, basic comfort and drivability of the Camry. Storage everywhere, a 60/40 split-folding rear seat, an abundance of family friendly features, and reasonable fuel economy make the Venza a credible choice for one of 2012’s best all-wheel drive station wagons. Two engines are offered to power the Toyota station wagon; the 182-horsepower four-cylinder offering displaces 2.7-liters and produces 182 ft.-lbs. of torque. The 268-horsepower, 3.5-liter V6 produces 246 ft.-lbs. of torque. Both engines use a six-speed automatic transmission.

While this Volvo may look like a beefed-up station wagon, it's fully capable of going anywhere a SUV would go. In other words, the Volvo XC70 is a straight up off road vehicle. It'll clamber over rocks, ford streams, sluice through sand washes, and deal with dirt just as well as nearly any SUV you can name. The XC70 is no pretender; it’s a definite contender. This entry on our list of the best AWD station wagons is luxurious too—combining plush leather, genuine wood trim, and sumptuous carpeting to create a very favorable ambiance. Yes, it’s got a few quirks, but it more than makes up for them with style and capability. The 2012 Volvo XC70’s base engine is a 3.2-liter inline-6 that produces 240 horsepower and 236 pound-feet of torque. A six-speed automatic feeds power to the optional all-wheel drive system. The T6 AWD version of the Volvo flaunts a turbocharged 3.0-liter inline-6 with 300 horsepower and 325 ft.-lbs. of torque. 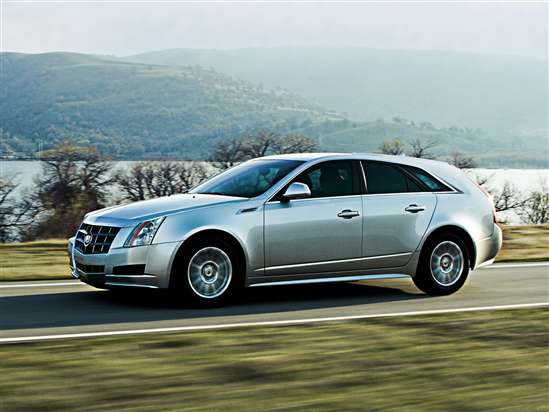