Back in 1986, Honda did something totally unprecedented in the automotive marketplace. The company introduced two Japanese luxury cars. Further, Honda developed an all-new brand under which to market those cars, and in the process, created the first Japanese luxury car brand. Those first Acura models caused quite a stir—particularly the forerunner to the 2014 Acura ILX, the Acura Integra.

Immediately sought after, Acuras were coveted for their road skills and content just as much as they were for their remarkably competitive pricing. In other words, Acura became an overnight sensation.

During those early years, Acura outsold both Mercedes-Benz and BMW by significant margins. Of course, success breeds competition. Hot on the heels of Acura came Toyota’s Lexus and Nissan’s Infiniti brands. Mazda had plans for a luxury brand as well—and even went so far as to announce the nameplate; Amati—but those plans were stillborn.

Over the years, the Acura brand grew and prospered, and along the way offered the world’s first Japanese mid-engine exotic sports car—the NSX. Over time though, as competition became ever more fierce in this segment, Acura’s fortunes took a downturn.

Today, the brand is in something of a renaissance.

One of the cars tapped to lead the way back is the company’s ILX entry-level luxury sport sedan. A brazen attempt to recapture the youth-oriented market Acura used to own with its Integra model, the ILX represents an effort to return to the brand’s core principle of affordable luxury in a performance-oriented package.

For the 2014 model year, Acura is offering the ILX sedan in four trim levels, along with two hybrid variants. The hybrids will be covered in a separate review.

Standard features include a set of seventeen-inch alloy wheels, a sunroof, a full complement of power accessories, keyless entry and start, a tilt-and-telescoping steering column, leather upholstered seating with eight-way power adjustability for the driver along with heat for both front seats, active low-frequency noise cancellation to quiet the passenger compartment, and a dual-zone automatic climate control system.

Elements of the Premium package, regardless of the displacement of the engine, include all of the above along with a rear view camera monitoring system, an auto dimming interior rearview mirror, a set of fog lights, and xenon headlights.

The Technology package, which can only be had with the 2.0-liter engine, is composed of all of the aforementioned features from the base model and the Premium package—as well as navigation, voice control for most secondary functions, and a 10-speaker surround-sound audio system capable of audio DVD playback.

Gratefully, the shield-like appendage Acura added to its grilles a few years ago is toned down for this application. Though still dominant, it is integrated much better here. Further, the sleek headlight treatment frames the grille nicely while playing into the overall wedge shape of the face of the Acura.

Moving rearward, a sharply defined character line runs from the headlights to the rear of the ILX, giving it a well-delineated shoulder line. There’s a lot of surfacing going on along the sides of the car. It’s all handled rather deftly, and comes across as sculptural.

The rear ¾ view really sums up the tidiness of the design, and is probably the only place you can see something of a resemblance between the ILX and the Civic. Overall, it’s tasteful, and should wear well over time.

Designed with the driver in mind, the interior of the ILX caters specifically to the pilot. Every control is well defined and readily accessible. The centerpiece is he steering wheel, which is adorned with a number of secondary control buttons. Everything from the navigation system and cruise control, to the telephone, audio system, and trip computer can be operated from the steering wheel—or at least adjusted from there.

Sitting atop the dash is a display monitor, through which the Acura’s infotainment features are operated. Here, Acura is to be commended for the wealth of techno-functions packed into the ILX. You saw it all listed in the previous section, so we won’t get repetitive about it here. However, sitting behind the wheel and seeing it all, is quite impressive.

The large centrally-located dial in the center stack is the primary interface for these features. The primary controls for the audio system and the navigation system reside just above the dial—as well as around it. The climate control system’s interface resides just beneath the dial with separate temperature controls for the driver and the front passenger.

The placement of the handbrake is particularly nice, as it gives the driver someplace to rest the right hand when it isn’t operating the transmission, or being called upon to help steer. It’s also nicely placed for executing handbrake turns (but you didn’t hear that from us—OK?). All in all, it’s a nice, if not exactly a visually stimulating layout. Everything you need is pretty much where you’ll expect to find it.

As you might imagine for a compact luxury model with performance overtones, rear-seat legroom is at a premium. However, the ILX is considerably more generous in this regard than many of its competitors. Where the ILX might come across as a bit claustrophobic is in headroom. We love the fact a sunroof is standard, though we do lament the few inches of headroom it costs. If you’re less than six feet tall, this won’t impact your life a great deal—taller people will notice though.

The seating, on the other hand, is first rate. Firm, comfortable, and supportive without being too hard, the ILX deserves a great deal of praise in this area. The multi-adjustable driver’s seat is rightfully appreciated, but when your front passenger looks around the interior of the Acura at all the cool tech, and then has to adjust their seat manually—well the luster is diminished a bit.

The usual array of door pockets, center console, and glove box storage is present and accounted for. The rear seat back folds to allow longer objects to protrude into the passenger compartment from the trunk, thus increasing cargo space. We’d like to see the back split to offer more flexibility though. Trunk space comes in at 12.4 cubic feet with the rear seatback in place.

The standard suite of tech is fitted to the ILX; this includes the obligatory antilock brakes, stability and traction control, front seat side airbags, side curtain airbags, and active front head restraints. A rearview camera is optional. Where the Acura falls down a bit on the safety front is in terms of the latest features like proximity sensors, rear cross-traffic alert, blind spot monitoring, and etc.

Yes, we understand the ILX is an entry level model, and pricing is highly competitive in this category, but when blind spot monitoring can be had on models like Hyundai’s Sonata, we gotta wonder why it isn’t even available as an option on the Acura—particularly given the wealth of other tech-oriented features available with the ILX.

On the other hand, the body structure of the Acura ILX was designed to perform well in crashes. NHTSA gave the ILX five stars overall (its highest rating) in crash testing. Although the ILX only earned four in frontal crashes, it garnered five in side impact testing.

The IIHS (Insurance Institute of Highway Safety) awarded the ILX “Good” ratings in moderate-overlap frontal-offset, side-impact, and roof strength crashes. By the way, “Good” is the institute’s highest rating. This gave the organization cause to name the Acura ILX a “Top Safety Pick”.

As the model’s nomenclature suggests, two engines are offered to power the front-drive Acura sedan; all-wheel drive is not available.

The base engine offering is a normally aspirated, 150-horsepower, 2.0-liter four-cylinder engine producing 140 ft-lbs of torque. This powerplant comes mated exclusively to a five-speed automatic transmission. Fuel economy is estimated at 24 miles per gallon in the city, 35 on the highway, and 28 miles per gallon combined.

The other engine offering is a 2.4-liter inline four cylinder, also naturally aspirated and producing 201 horsepower and 170 ft-lbs of torque. The sportier of the two options, Acura fits a six-speed manual transmission to this engine to complete its powertrain. Fuel economy for this configuration is estimated at 22 miles per gallon in the city, 31 on the highway, and 25 combined.

Our test car was fitted with the 2.4-liter engine and the six-speed manual transmission. Like all Honda engines, a driver’s willingness to wind the engine tightly is rewarded with a delightful engine note. The shifter was quite crisp, we never found ourselves hunting for the next gate, and given the free-winding nature of the engine, we had a lot of fun spinning it to redline before executing ultra-precise shifts.

As you’d expect from a descendant of the much-loved Integra models, the ILX handles crisply, turns in nicely, bites purposefully in the corners, and just generally rewards enthusiastic driving. One thing we really appreciate about the Acura ILX is the near perfect balance of ride vs. handling the car’s engineering team dialed into its suspension system. The Acura is fun to drive on a twisty road and yet the car is nicely compliant over rough and uneven pavement. The Acura ILX is one of very few cars out there with both engaging handling and a comfortable ride.

The comparatively low torque output meant we had to be careful setting off from a stop in the ILX. If you’re not careful, stalling can occur. On the other hand, clutch take-up is nicely predictable, so once you figure out how many revs to give it to get moving in a given situation, one can be quite smooth with the ILX.

With the six-speed manual transmission and the 2.4-liter engine the Acura ILX is quite the satisfying driver’s car, if not exactly one of the fastest.

A certain brand’s turbocharged inline six-cylinder model will leave the Acura ILX in the dust. So too, for that matter, will the same brand’s turbocharged 2.0-liter four. Further, there’s no beating rear-wheel drive when you’re talking about performance oriented driving.

But before you go comparing the Acura to a BMW, keep in mind, both BMW engines are turbocharged, and their host automobiles cost more. Yes, you get more performance, and you pay more for it too. So that shouldn’t really be a knock against the Acura.

However, the Acura ILX is being billed as an entry-level luxury/sport sedan, and as such it’s competing in a rather hotly contested segment. For the record, Buick’s Verano is configured similarly, costs about the same, and offers 250 horsepower—with an automatic transmission.

This could be an issue for people who commute in stop and go traffic, as the clutch pedal kinda stops being an ally in these situations. Yes, Acura offers an automatic with the 2.0-liter, but frankly, we think it ought to be the other way around. If nothing else, there should be an option to have a choice between the automatic and the manual with both engines.

Kinda plain looking, inflexibility of transmission choices, a lot of modern safety features are not available 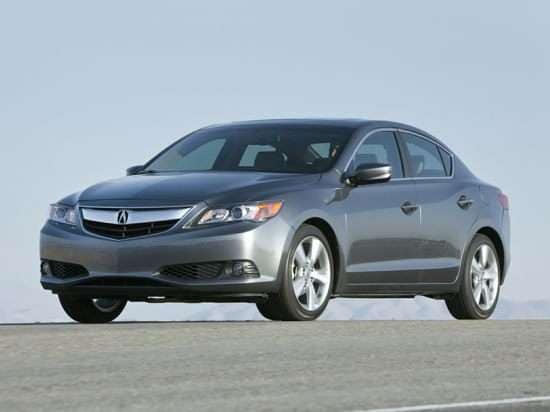