Power and efficiency can exist in one package

Introduction
By Christian Wardlaw
Safety and comfort have been Volvo’s hallmarks for decades, and until recently, the Swedish company was one of the few automakers on the planet to reliably provide both. But now that everyone wants a car with great crash-test scores, cutting-edge occupant protection technology, and seating that soothes for hundreds of miles at a time, Volvo’s lock on safety and comfort has been weakened.

To ensure the popularity of future products, Volvo has turned to design and performance as complements of its traditional virtues. Volvos have traded angular creases for sensual curves, and the introduction of an R performance line based on S60 and V70 models has delivered street credibility as a legitimate builder of Euro-sport sedans and wagons.

That’s one reason for the new V8 engine under the hood of the 2005 Volvo XC90 V8 – performance. The other is that without a V8 badge on the grille and the tailgate, Volvo couldn’t woo luxury-ute shoppers who absolutely, positively must have eight cylinders under the hood to medicate their affluenza. Nevermind the potential drop in fuel economy – for the XC90 to be taken seriously by consumers looking for a luxury suv, a V8 engine is a necessity.

We spent a week with a 2005 Volvo XC90 V8 to see how an infusion of power and refinement works to the buyer’s benefit, and deduced that this Yamaha-sourced engine is quite a piece of work, making the XC90 more appealing than ever. Better still, the V8 gets the same EPA-rated fuel economy as the less powerful six-cylinder in the XC90 T6.

Though compact in size, the ULEV-rated V8 generates a robust 311 horsepower at 5,850 rpm and 325 lb.-ft. of torque at 3,900 rpm. Volvo says that the engine offers a thick wad of that maximum torque down at the 2,000-rpm level, and given the XC90 V8’s enthusiastic response off the line, we have no reason to doubt it. To extract maximum performance from Volvo’s first-ever V8, premium fuel is recommended, but we topped off with less-expensive 87-octane and experienced no drivability problems.

The EPA says the XC90 V8 can be expected to get 15 mpg in the city and 20 mpg on the highway, which is exactly the same as the XC90 T6 with a 268-horsepower, 2.9-liter inline six-cylinder engine. We averaged 18 mpg in a mix of city traffic, light off-roading, and long-distance highway driving with a full load of people and cargo aboard. That’s impressive for any V8, and we did half of our miles with all three rows occupied and a trunk full of picnicking provisions.

A new six-speed Geartronic automatic transmission delivers power to all four wheels through Volvo’s Instant Traction AWD system. Geartronic is Volvo-speak for its line of automatic transmissions that can be shifted manually. In the XC90 V8, the manual shift gate is located on the driver’s side of the center console where it’s easy to use, and unlike in a BMW X5, shift action is intuitive with a tap up for an upshift and a tap down for a downshift. Geartronic is great fun to use, and responsive with little shifting delay.

Instant Traction AWD is a fancy term applied to the XC90 V8’s next-generation Haldex all-wheel-drive, which is “pre-charged” with torque to reduce wheelspin, allowing the XC90 V8 to react more quickly to changing road conditions. Instant Traction AWD also includes a winter driving mode for snow- and ice-coated roadways. Another change is that more torque can flow to the rear wheels than in the regular XC90, giving the V8 model an added edge in treacherous conditions.

On the outside, the most obvious difference is the V8 badge added both front and rear. Subtler modifications include body color trim, chrome accents, a graphite-gray grille, and dual exhaust outlets. Under the bodywork, there’s a Nivomat self-leveling rear suspension that helps the XC90 V8 keep an even keel under heavy loads.

Inside, the XC90 V8 is decked out in sportier aluminum dash and gearshift trim, and the V8 is the only model that can be outfitted with real wood inlays as an option. Other standards include leather third-row seats, a second-row integrated child booster seat cushion, third-row climate control, and power-operated child locks. Rear audio headphone outlets and controls complete the list of changes for the XC90 V8.

Fire the engine, select a gear, and off the XC90 V8 roars, emitting an exhaust note that lacks the traditional rumble of most eight-cylinder engines yet is clearly throatier than a typical six-cylinder motor. Imagine the sound created by a Mustang GT and Nissan 350Z revving simultaneously, and you’ll approximate the distinctive note of the XC90 V8.

Though quick, the XC90 V8’s throttle response could use improvement. There’s a momentary delay upon initial pedal application, common in European cars but maddening in the crush of aggressive, American bumper-to-bumper traffic. At least the ventilated four-wheel-disc brakes are responsive, with terrific pedal feel that makes it simple to squeeze just the right amount of pressure to the pads.

On the rumpled freeways of Los Angeles, the XC90 V8 porpoised plenty due to its short wheelbase, producing a ride quality unfit for a luxury vehicle. Even on surface streets, the SUV exhibited a busy ride usually associated with less expensive machinery. On smooth blacktop, the XC90 V8 was happiest, but typically drivers encounter such flawless surfaces infrequently. We did, however, appreciate the self-leveling rear suspension when driving with a full load of passengers and cargo.

Steering, too, could use improvement. Off center, the steering builds excessive heft and pressure, requiring muscle to hold a line through a sweeping curve, or to parallel park. luxury vehicles should feel light and lively at the fingertips, but our Volvo XC90 V8 felt ponderous and heavy. The optional wood-rimmed steering wheel, which gets hot enough under direct sunlight to toast bruschetta, doesn’t help matters, especially if the driver has excessive sweat or lotion on his palms.

We blazed along a two-track trail cutting across the high desert floor with a couple of dry washes and a rutted hill to test the Volvo’s mettle, and the XC90 V8 performed well in this light-duty off-roading environment. Volvo’s Instant Traction AWD system works as advertised, at least in the loose dirt of California’s Antelope Valley. We did not get a chance to test the system in mud, rain, or snow.

Ultimately, the 2005 Volvo XC90 V8 is something of a compromise. Based as it is on the V70’s platform, it’s stuck with a shorter-than-optimum wheelbase and a tall, narrow stance that gives it a choppy ride and lower handling limits than some competitors. But the 4.4-liter V8 engine gets good fuel economy, is the first eight-cylinder to meet ULEV-II emissions standards, makes for entertaining driving in combination with the Geartronic automatic, and is mounted transversely to preserve the XC90’s frontal crush zone in an accident. Plus, the new Instant Traction AWD provides added peace-of-mind when the weather turns foul.

Space in the rear seats is unimpressive, too. With four six-foot-tall people aboard, the two passengers in the second-row seat will have their knees and shins contacting the front seatbacks, though there’s plenty of foot room. The third-row seats are virtually uninhabitable by adults, severely lacking in both leg and foot space, extremely difficult to climb into and out of, and facing hard carpeted second-row seatbacks. Seriously – kids only, and even they will be unhappy after a few hours.

With a dark gray exterior and a dark gray interior trimmed with dark brown wood, our 2005 Volvo XC90 V8 test vehicle was as dour as a Michigan winter landscape. We’d probably choose a brighter exterior color with the available taupe interior, especially if ordering the package with wood trim.

On a positive note, ergonomics are quite good for a European vehicle, with clearly marked controls that are easy to find. Plus, the stereo sounded terrific, and featured nine pre-sets for each radio band. However, our sample did not have seat heaters for chilly nights or ventilated seats for hot days. Neither did it have a navigation system, or a rear seat DVD entertainment system. Heated seats, navigation, and entertainment would have added thousands to our test Volvo’s price tag of almost $50,000.

What our XC90 V8 did have is a terrific package of safety equipment. Dual-threshold front, seat-mounted side-impact, and side-curtain airbags for all three rows are standard. Traction control, stability control, and roll stability control are also standard on the XC90 V8, along with a Rollover Protection System that keeps the side-curtain airbags inflated for extra protection. There’s a whiplash protection system, a side-impact protection system, and coming soon, an optional warning system that warns the driver when objects occupy the XC90’s blind spots.

To remove the cargo cover, pop the hatch and lower the bottom portion of the tailgate. Climb onto the hard plastic finish of the tailgate, reach in, and detach the unwieldy cargo cover. Carefully maneuver it past the D-pillars and third-row seatbelt webbing, slide off the tailgate, and stow the cover in your home or garage. What? Just arrived at the airport to pick up family and didn’t think ahead? Well, you’re sorry now. Have riders in the second row of rear seats hold it on their laps. On an angle. Or with the ends poking out of the side windows.

Raising and lowering the third-row seat must be performed from the rear side doors. Tilt and slide the second-row chair forward, and deploy the third-row seat by flipping the backrest up and yanking the bottom cushion out of its cubby under the cargo floor. This is actually an ingenious design, and includes full-sized headrests that never have to be removed.

When the third-row seat is stowed away, the XC90 V8 provides a huge cargo space, plenty to carry the luggage of four or five passengers. Reaching bags that are located near the second-row backrests, however, is a challenge due to that lower tailgate portion that must be folded down. Either you must lean against its leading edge and stretch to get that errant bag, potentially soiling the front of your pants, or you must hop up onto the tailgate and reach into the XC90 on all fours, entertaining all manner of passersby. Though it creates a nice seat for soccer games, most of the time this tailgate design is a hassle.

Folding the second-row seats down to maximize room is easy, but the resulting load floor is riddled with gaps through which small items could disappear, and the plastic lid for the third-row storage bin is exposed to potential scratches. The front passenger’s seatback also folds in half by pulling two releases near the floor and flopping the seat forward. The upholstery on the seatback could easily be damaged by sharp objects, so lift rather than slide longer cargo to avoid punctures. 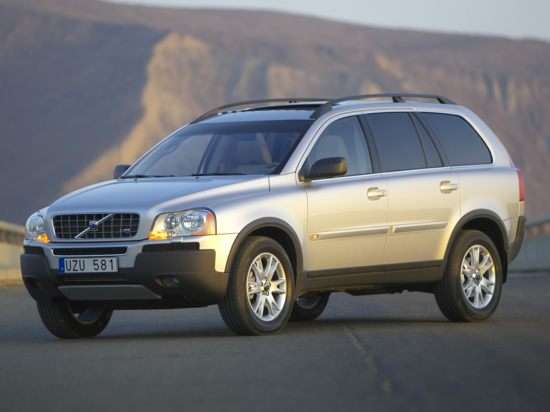