The Volvo XC70 is a four-door, wagon-based crossover vehicle that offers the option of all-wheel drive as well as better than average ground clearance in order to afford it with limited off-road capability. The Volvo XC70 can seat five passengers and carry up to 72 cubic feet of cargo, which is enough to challenge several SUVs currently on the market. Like all Volvo automobiles, the XC70 is loaded with airbags and features an impressive array of available safety features including the Personal Car Communicator which can actually detect the heartbeat of an intruder hiding within the vehicle and notify drivers as they approach the crossover. A blind spot warning system is also optional with the Volvo XC70.

Under the hood of the Volvo XC70 3.2 is a 240 horsepower, 3.2-liter six-cylinder engine that also develops 236 lb-ft of torque. A six-speed automatic transmission is standard, and fuel mileage checks in at 19-mpg city and 25-mpg highway. The entry-level Volvo XC70 3.2 (MSRP $32,950) is equipped with skid plates, dual automatic climate control, a power driver's seat with a memory feature, Bluetooth connectivity, roof rails for hauling additional cargo and a CD player. Opting for the Premier 'trim' (actually a grouping of options) adds leather seats, tinted windows and a sunroof, while the Premier Plus trim further installs parking assistance, a power tailgate and keyless entry. The Platinum trim stands at the top of the Volvo XC70's options pyramid and it offers a navigation system that includes a rearview camera and a louder stereo system.

The Volvo XC70 T6 (MSRP $39,100) matches the 3.2 note-for-note when it comes to available features (with the exception of the Premier trim), but comes with a more powerful, 3.0-liter six-cylinder engine that makes use of a turbocharger to generate 300 horsepower and 325 lb-ft of torque. 18-inch wheels and all-wheel drive are standard with the XC70 T6, and fuel economy is rated at 17-mpg city and 23-mpg highway. Options available across both versions of the Volvo XC70 include the Climate package (automatic wipers, heated front and rear seats), HID headlights and the Technology package (adaptive cruise control, lane departure warning system, collision warning and pedestrian detection with full automatic braking). 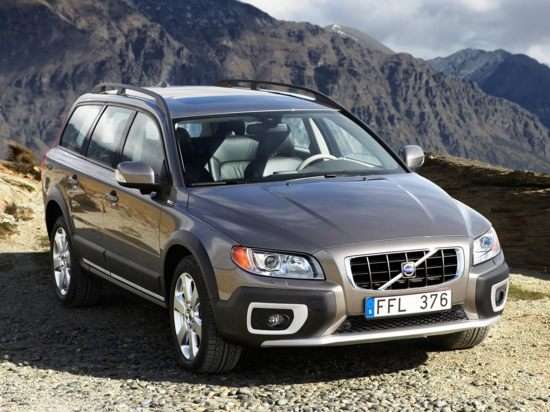