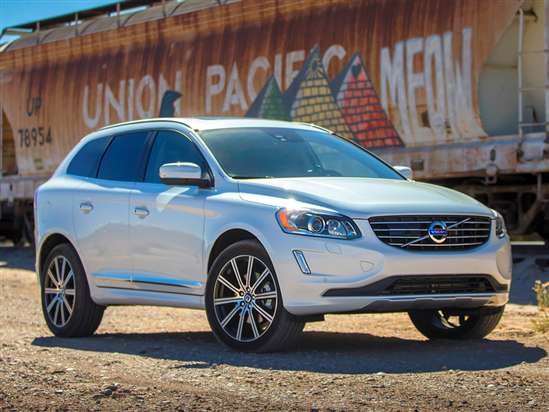 There are 17 different versions of the 2015 Volvo XC60 from which to choose. Five primary model series are offered in the form of the 3.2 AWD, T5 Drive-E, T6 Drive-E, T6 AWD, and T6 AWD R-Design. Within each series, buyers can select standard, Premier, Premier Plus, or Platinum levels of trim. Beyond the trim packages, Volvo offers a menu of option packages and individual upgrades.

The big news for 2015 is the addition of new, more fuel-efficient engines to the XC60 lineup. The XC60 T5 Drive-E model’s turbocharged, 2.0-liter 4-cylinder engine makes 240 horsepower and 258 lb.-ft. of torque, while the T6 Drive-E model’s turbocharged and supercharged 2.0-liter 4-cylinder engine generates 302 horsepower and 295 lb.-ft. of torque.

The least expensive path to all-wheel drive is the XC60 3.2 AWD model. It has a 3.2-liter 6-cylinder engine generating 240 horsepower and 236 lb.-ft. of torque, paired with a 6-speed automatic transmission and Volvo’s Instant Traction AWD system. More power is available in the XC60 T6 AWD, which features a turbocharged, 3.0-liter 6-cylinder engine making 300 horsepower and 325 lb.-ft. of torque.

At the top of the XC60 lineup, the T6 R-Design is equipped with a massaged version of the T6 AWD model’s turbocharged 6-cylinder, one rated to make 325 horsepower and 354 lb.-ft. of torque. This version of the XC60 also has paddle shifters, Advanced Quick Shift technology, improved steering response, and a sport suspension.

In crash tests performed by the NHTSA, the XC60 earns a 5-star overall rating in every impact assessment combined with a 4-star rollover resistance rating, for an overall rating of 5 stars. The Insurance Institute for Highway Safety (IIHS) also gives the XC60 top marks, calling it a “Top Safety Pick” in combination with a “Superior” front crash prevention rating.

In addition to standard City Safety technology, which is a low-speed collision avoidance feature, the XC60 is available with a range of safety systems including several that will automatically brake the SUV in order to avoid a collision, or to mitigate the effects of one.