Faced with the prospect of a six-hour, 375-mile drive over a broad variety of roads, through a multitude of weather conditions, one could make far worse choices than the Volvo XC60 T6 AWD R-Design. Boasting all-wheel drive, comfortably supportive seats, and a handsome exterior that doesn’t draw undue attention, the XC60 R-Design is exactly the tool needed for a long distance, high speed run.

It also works very well as a day-to-day around town conveyance.

Throughout its existence, Volvo has cultivated a reputation as a safety-first car company. Nowhere was this more apparent than in the designs it chose for its vehicles throughout most of the 20th century. One cinematic parody of Volvo back then summed the company up in the following sentence; “Volvo, boxy, but good.”

Lately though, the Swedish carmaker has demonstrated more sensual proclivities. Suddenly, the lines of its designs flow. The bodies have a forward leaning rake to them as if they’re leaning into the wind. And perhaps most significantly, there is an explosion of horsepower and torque from smoothly silken turbocharged inline sixes.

Yet, the cars are still safe, making them the rolling embodiment of… (At this point we’ll leave you alone for a moment to make the connection between safe and sex in your head.)

OK, do we have your attention back now?

The Volvo XC60 is offered in three models; XC60 3.2, XC60 T6 AWD, and XC60 T6 AWD R-Design. Within that structure, there are three levels of trim; Base, Premier, Premier Plus, and Platinum. As you’ve probably surmised, the AWD designation indicates models configured with all-wheel drive.

As you might well imagine, the trim packages add more luxurious as you work your way up from Base through to Platinum. The Premier trim level (only offered with the 3.2-liter engine) adds Keyless Drive, Volvo’s Personal Car Communicator (PCC) and an Accessory Prep cable.

The Personal Car Communicator—integrated into the keyless remote—gives you valuable information about the status of the vehicle. It can tell you whether or not you locked the XC60, if the car was tampered with while you were away, and it can even tell you if someone is waiting for you in the XC60. Other attributes of the Premier trim package include leather seating surfaces, a Panoramic Roof with two laminated glass panels and a power sunshade, dark tinted rear windows, silver roof rails and side window trim; and a power adjustable passenger seat.

To all of the above, the Platinum trim level adds the Volvo Premium Sound System with Dolby Pro Logic II Surround Sound, 12 premium speakers and 650 watts; a Navigation System with real time traffic, remote control, map care, and a rear park assist camera.

One of the most brilliant examples of the design renaissance at Volvo, the XC60 is a nicely sculpted piece with delightfully chiseled features. The small Volvo SUV manages to look both graceful and tough.

The strong shoulder line intimates strength and solidity, while the coupe-like passenger compartment’s greenhouse telegraphs both the Volvo’s luxury quotient as well as its performance potential. Equally at home in a shopping center parking lot, at an elegant venue, or on a dusty back road, the look of the Volvo XC60 promises a healthy dose of style and utility right along with comfort and convenience.

Further, the design proves safe doesn’t have to mean boxy.

The gracefully curvaceous rear view of the XC60 puts the LED taillights up high, for ready viewing. The softly rounded nose provides protection for pedestrians in the event of untoward contact, and that strong shoulder line transmits crash forces through the length of the body, channeling them away from the passenger compartment.

Yeah, sexy really can be safe too.

Design cues specific to the R-Design model include 20-inch alloy wheels, color-matched lower body moldings, and a metallic-themed interior with aluminum inserts in the steering wheel, door moldings and the center stack. Additional R-design attributes include a silk metal finish for the exterior mirror housings and trim moldings. R-Design XC60’s also floss skid plates, twin chrome tailpipes, and of course the R-Design logo is embossed in the front seat backrests as well as mounted on the grille.

The R-Design seats are nicely sculpted and firm in all the right places, providing hours of fatigue-free support. The XC60 is also one of the few small SUVs with a rear seat capable of transporting full-size adults in comfort. When it comes to cargo, the XC60 can be configured to handle up to 67 cubic feet of stuff—thanks to the split-folding rear seat.

The control interfaces are near clairvoyant in their intuitiveness. Volvo’s engineering team spends a great deal of time fine tuning the driver interface of its cars and it shows in details like the large knobs for the audio system, the pictogram control for the climate system, and the overall layout of the dials, buttons and switches involved in the operation of the XC60’s secondary features.

Rain sensor windshield wipers and headlight washers are newly standard on all XC60s for 2013. The new Tunnel Detection feature automatically turns on the headlights when the vehicle enters a tunnel; then returns the lights to their previous setting upon exiting. Also new for 2013, Volvo’s Keyless Drive with the integrated Personal Car Communicator becomes standard equipment on T6 AWD and R-Design.

The power delivery of Volvo’s 325-horsepower turbocharged 3.0-liter inline six-cylinder fitted to our test car was smooth and free flowing. In the XC60, Volvo claims a 6.9-second 60 for it. Top speed is limited to 130 miles per hour.

Fuel economy is rated at 17 miles per gallon in the city and 23 on the highway, using premium-unleaded fuel.

Remarkably, even though the XC60 is an SUV, it drives like a sedan. In R-Design livery it drives like a sports sedan. The 20-inch aluminum alloy R-Design wheels enable the XC60 to carry more aggressive rubber, while simultaneously minimizing unsprung weight on the upgraded suspension system. Additionally, the steering gear fitted to the R-Design models is quicker, resulting in improved steering response.

During that six-hour run we encountered a number of wide-open straights running several miles across flat desolate valley floors. At significantly elevated speeds, the XC60 R-Design’s stability inspired exceptional confidence. When those straights ran out and the road climbed up and through mountain passes, the all-wheel drive system, in concert with the R-Design performance enhancements enabled us to maintain a brisk pace with no concerns of losing the road. High in those mountain passes we encountered rain, which turned to snow as our elevation increased. In this circumstance, the all-wheel drive system fitted to the R-Design XC60 delivered outstanding traction and control.

In addition to the more powerful engine, R-Design models get more aggressive shocks and springs, as well as a more direct steering gear. These changes really bring the hard charging nature of the XC60 R-Design to life. The Volvo displays excellent balance, with a bias towards understeer when its limits are approached. Braking is outstanding and the Volvo’s stability is absolutely reassuring. This is a car you can drive over a very long distance in a continuous fashion and experience very little fatigue.

When it came to market in North America in 2009 as a 2010 model, the XC60 was the first Volvo to offer the technology dubbed City Safety. Basically, it stops the XC60 if the SUV is traveling 19 mph or less and its forward-looking systems sense an imminent collision.

This, in addition to all the other safety features Volvo typically incorporates makes the XC60 one of—if not the—safest SUV in its class.

Other standard safety features include antilock brakes, traction and stability control, front side airbags, side curtain airbags and whiplash-preventing front seats. The standard safety suite is enhanced when the optional Technology package is ordered. Active High Beams automatically switch the headlights to low beam when opposing traffic is detected. Road Sign Information displays traffic speed signs for the driver on the instrument cluster based on information gathered by the Forward Looking Camera.

NHTSA found the XC60 to be worthy of five stars in frontal and side impacts. The IIHS concurs, awarding its highest rating for the Volvo XC60 in both of those categories, as well as the organization’s roof strength test.

If you’re starting to get the impression this is one epic driver, you’re absolutely correct.

What’s more, 15 years ago a car with a Volvo badge on it, while certainly reassuring from a security standpoint, would have absolutely been a big yawner from a performance standpoint.

Things have most assuredly changed.

Volvo has proven safety, performance, and style can all be incorporated into a single package, and at a relatively reasonable price point—considering what you’re getting. The 2013 Volvo XC60 T6 AWD R-Design is a car one needn’t make any qualifying statements for when asked what they drive.

The model is a standout all on its own. 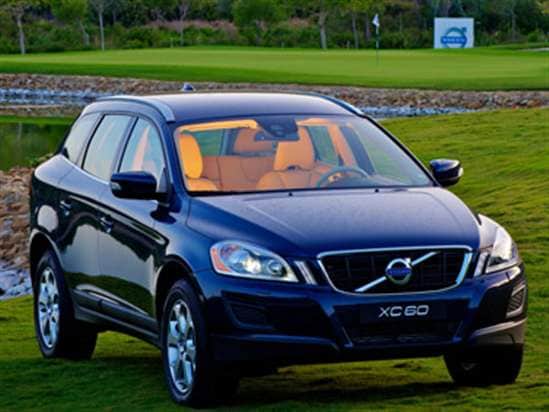