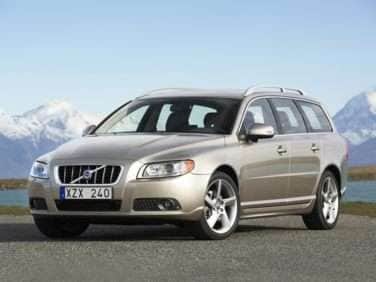 All About Volvo V70

The Volvo V70 is a four-door five-passenger luxury station wagon. The Volvo V70 was first introduced in 1998 as a revised and repackaged Volvo 850, which had been discontinued. There were minor changes done to the front end and a slightly different suspension but not much else. Volvo brought out an all-wheel drive option for the GLT models later that same year. The second generation V70 arrived in 2001 with a different shape and platform. It was available in four trims - 2.4, 2.4T, T5 and XC. In 2004, the 2.4T became the 2.5T with a turbo engine under the hood. Also in 2004, the XC trim becomes a separate model. From 2004-2007, the V70 R model was available. This was a high performance model with all wheel drive and a 300 horsepower engine.

For the 2008 model, there is only one trim level available, the 3.2, and it comes fully loaded with some of the most popular features. For the upcoming 2009 release, Bluetooth connectivity and fog lamps have been added in with a couple of upgrades to the packages but there are no other major changes.

Under the hood of the current Volvo V70 is a 3.2 L inline six cylinder that produces 235 horsepower with 236 lb-ft of torque. Paired with this engine is a six-speed automatic transmission with overdrive.

The EPA fuel economy rating for this vehicle is 16 miles per gallon in the city and 25 mpg when driving on the highway.

For the interior of this vehicle, comfort and functionality come together nicely. There’s a cushy power driver's seat, automatic climate control and a nice complement of power features showing a nice touch of luxury. This vehicle competes well against others in the midsize wagon class. The recent redesign also upgraded the instrument panel. The rear seat is split 40/20/40 split allowing for increased cargo capacity with its seating configurations.

The Volvo V70, in order to successfully compete well in its class, has to have a full complement of standard features. Included in this model are rear fog lights, halogen headlamps, power heated mirrors with memory, dual speed windshield wipers, remote keyless entry, Bluetooth connectivity, trip computer and an outside temperature gauge. There is a rear window defroster with timer and rear ventilation outlets, as well as a security alarm system.

There are several standalone options for this vehicle like a rear-seat DVD entertainment system, which includes a Dynaudio audio system. There is also an automatic climate control, and a xenon high-intensity-discharge adaptive headlamp system that helps when driving around corners. Multiple packages are also available to suit most consumers’ needs.

Volvo always upholds their high level of safety features. The Volvo V70 is no exception. Some of the highlights include a reinforced compartment around the passenger area as well as a large energy-absorbing structure, two stage front, dual chamber side and side curtain airbags. It also comes with the Whiplash Protection System (WHIPS), antilock brakes with electronic brake assistance, dynamic stability and traction control, tire pressure monitor, and even impact protection system. On top of that, the installed cruise control has collision warning and there is the blind spot information system too.

The 2009 Volvo V70 is a carryover from 2008. The 2009 V70 wagon is available in only one trim, the 3.2. This version of the vehicle makes use of a 3.2 liter, 6-cylinder engine that generates 235 horsepower and 236 lb-ft of torque. Fuel economy is rated at 16 miles per gallon in the city and 25 miles per gallon on the highway. A 6-speed automatic transmission sends power to the front wheels and features a Geartronic manual shifting option.