The all-new 2019 Volvo V60 mid-size station wagon is bucking a trend — the explosive growth of crossover suvs — but if any brand can breathe new life into the wagon, it is Volvo. For decades, Volvo station wagons grew so popular that they became a suburban cliche. It seemed that in every movie that featured a suburban family, their vehicle was a Volvo wagon.

Now, in an era when many manufacturers have long ago trashed their station wagons and some are even thinking of deep-sixing their sedans, Volvo has taken a contrarian course by pouring significant effort into its V60 wagon. It demonstrates the brand is embracing its lengthy station wagon heritage. Rather than pretend the V60 is an urban hipster conveyance, Volvo launched the vehicle in what it called “its natural habitat” — the driveway of a family home in Stockholm. The company says the new vehicle’s versatile design “caters to the diverse needs and realities of modern family life.”

You’ll have to forgive enthusiast car writers for loving the looks of European station wagons like the Volvo V60. They can’t help themselves; it’s apparently in their shared DNA, so take what we say about the V60’s looks with a grain of salt the size of a brick.

The way we see it, the V60 is a more interesting shape the S60, its conventional sedan brother. The two cars share a common face, but the V60’s two-box profile has some Volvo P1800 wagon in it, especially the shape of the side glass and the rake of the tail. No, Volvo designers didn’t specify an all-glass tailgate, but the effect remains. This isn’t a station wagon designed to haul a Boy Scout troop to the mountains. This is a wagon designed to whisk a contemporary family to a tony ski resort. And there is no doubt the V60 is a Volvo, thanks to its broad shoulders and "Thor’s hammer" front lighting.

Just as the V60’s exterior is a mashup of new and old forms, so is the V60’s interior. For example, when is the last time you saw patterned, cloth-covered seats in a luxury car? Yes, you can get leather seats in the V60, but its designers prefer cloth. The overall interior look is spare and clean. There are no wood insets; instead, a brushed metal band winds through the dashboard. The instrument panel features very clear electronic instruments with tachometer and speedometer presented as traditional round dials.

The center of the dash is dominated by the large, vertically oriented display screen. Volvo has gone all-in with the touchscreen display, using it well beyond entertainment and information. The climate controls are contained in the screen, without knobs to adjust things quickly. The good news is the screen is glare-free in many lighting situations, but it does gather fingerprints. We like the driving position and the adjustability of the front seats, and, yes, we like the cloth seat fabric. Room in the second-row bench seat is good, rear headroom is mammoth under the giant sunroof, and the seatback angle is comfortable.

The 2019 V60 features the next generation of Volvo’s Sensus infotainment system, which, as we just mentioned, is heavily reliant on the large center touchscreen. In most instances, this is a good thing, but there are instances when functions are buried a screen or two deep into the system, slowing your ability to access them quickly. This is a particular issue when you are driving. The saving grace is the ability to perform many functions via voice command. The Sensus infotainment system is fully compatible with Apple CarPlay, Android Auto, and 4G, and integrated navigation is also available.

Standard audio is a 220-watt, 10-speaker system that can be operated via steering wheel buttons, the Sensus touchscreen display, or voice control. The first of two uplevel audio systems is a Harman Kardon that uses 13 speakers including patented subwoofers. The principal subwoofer is mounted behind the dashboard to free up the front doors for extra storage space. The top-level system is Bowers & Wilkins, featuring a 10-channel amplifier, 1,100-watt output, and 15 separate speakers, including a tweeter-on-top center speaker that minimizes acoustic reflection from the windshield.

The Volvo V60 will offer what has become the standard array of Volvo powertrains. All are based on a dual-overhead-cam 2.0-liter four-cylinder base engine. The base engine is the T5, which utilizes turbocharging to deliver 250 horsepower and 258 lb-ft of torque. The next level of the stair step is the T6 model, which is both supercharged and turbocharged to produce 316 horsepower and 295 lb-ft of peak torque. The addition of a hybrid powertrain is possible in the future.

All powertrains use an eight-speed electronically controlled automatic transmission. Both front-wheel drive and all-wheel drive are offered, depending upon engine configuration. The Volvo powertrain scheme is an interesting one because it is so standardized across much of the company's product portfolio.

The Volvo V60 is one of the most fun-to-drive station wagons we’ve ever driven. OK, that isn’t the highest of praise, but to be less facetious, the V60 can hold its own in the company of many European-designed sports sedans. This is not your grandfather’s Oldsmobile Vista Cruiser.

The V60 offers good acceleration with essentially no lag and very little noise from under the hood. The eight-speed automatic shifts promptly and there is minimal shift-shock as it goes through the gears. Handling, as mentioned, is on par with the best wagon variants from the European manufacturers, and the ride quality is good, but certainly not cushy. Steering feel is also good, requiring little effort while not feeling over-assisted. The V60’s brakes are easy to modulate with good feel.

Volvo has long been a thought-leader in auto safety, so it is no surprise that the V60 nearly bowls you over with its available driver-assistance tech. Topping the list is City Safety with Autobrake technology that helps drivers avoid potential collisions. Volvo says it is the only system on the market to recognize pedestrians, cyclists, and large animals. The V60’s version of City Safety engages automatic braking to mitigate oncoming collisions.

The optional Pilot Assist system supports drivers in steering, acceleration, and braking on well-marked roads at up to 80 mph, and Volvo says it offers improved cornering performance versus previous iterations. The V60 also includes Run-off Road Mitigation, Oncoming Lane Mitigation, and other steering assistance systems. The optional cross-traffic alert with automatic braking is designed to help in cases such as backing up in parking lots.

The V60 sedan’s wide dashboard and light-colored, patterned cloth seats contribute to a feeling of spaciousness. Although the cabin isn’t especially wide, it offers an ample amount of passenger space for five adults. Because it is a station wagon, the V60 offers more cargo-carrying capacity and versatility than a sedan, but don’t expect it to deliver all the interior space of a contemporary crossover suv. Configured to carry the maximum amount of cargo, the V60 has 50.9 cubic feet of luggage space. With the second row of seating in use, it offers 23.2 cubic feet of space.

The V60 is offered in three different trim levels: Momentum, R-Design, and Inscription. The Momentum is the base model, but it is fairly well equipped and additional equipment can be ordered as options. The R-Design is the sporty trim with features that promote that impression.

The Inscription is a fully equipped car with items like the up-level Harman Kardon audio system and four-zone electric climate control with cooled glovebox compartment. The Bowers & Wilkins sound system is optional on the Inscription.

The V60 shares Volvo’s Scalable Product Architecture platform with the recently introduced S60 mid-size sedan. The similarities extend to safety technology and infotainment as well. While other brands treat station wagons as weird vestiges of the past, the V60 exemplifies Volvo’s commitment to the market, a market that it has succeeded in over the years.

The V60 is so new that it hasn’t yet been priced for the United States, but we expect its pricing to be in line with the recently introduced S60 sedan. We also expect the V60 to command a bit of a premium over the sedan version. To give you a hint of what to expect, the 2019 Volvo S60 Momentum T5 has an MSRP of $35,800 plus a $995 destination charge. The S60 Inscription T6 with all-wheel drive has a base price of $47,400 plus destination. The introduction of the Volvo V60 might not lead to a station wagon revival, but the car is an interesting addition to Volvo’s varied mix. 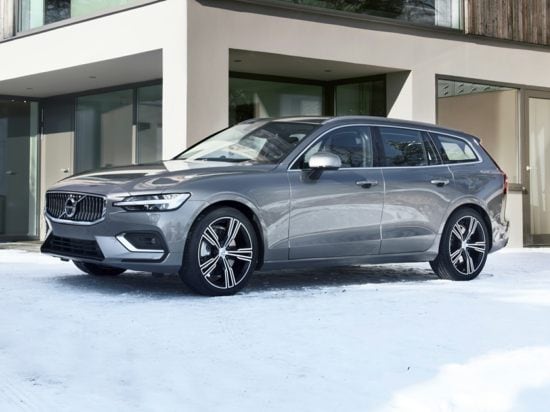