10 Reasons a Volvo V60 Is Better Than a Crossover

The Volvo V60 continues to do its share to support the world’s most successful Sino-Swedish automaker, relying on the same award-winning foundation—and dramatic design cues—as the brand’s compact S60 premium sport sedan. True, the V60 isn’t exactly a top seller, but it maintains an important Volvo tradition of selling wagons in this country, while also providing a versatile, car-shaped alternative to crossovers and SUVs. But it’s not just that the V60 offers an alternative—it also offers advantages that those bulkier, less-agile entries can’t match, from a much more engaging driving experience to unique Volvo technologies and hallmark Scandinavian styling. And because of its station-wagon body-style and surprisingly trailer-friendly powertrain, it does so without sacrificing the versatility that active owners demand.

1. You can help save an endangered species

1. You can help save an endangered species

Before we get to the many benefits of the Volvo V60 itself, let’s first recognize that, in choosing a station wagon, you can do your part to help save an endangered species from extinction. Although they used to roam American roads by the millions, station wagons experienced a major population crash in the 1970s, when their main source of food became increasingly hard to find in this country. The introduction of a number of invasive species—especially minivans and crossovers—then put additional pressure on wagons, and the latter found themselves unable to compete in the changing environment. At this stage, there are no domestically branded station wagons for sale at all in the United States, and there are just six wagons in total available. Won’t you please act now to help prevent these beautiful creatures from disappearing entirely?

Admittedly, designers have done some impressive work on the current crop of crossovers, managing to imbue at least some with the sort of artistic cues that allow them to nearly transcend their boxy origins. Nearly, yet not quite. Since the defining trait of a crossover is its taller, more angular proportions, examples just can’t furnish the kind of sleekness and wedge-like silhouette that are showcased by the Volvo V60. Of particular note, according to the brand, are the car’s elegant lines, which “do not end abruptly, but instead continue to flow organically, continually, echoing the smooth shapes of a racetrack.” Further, when the V60 is dressed out in aero upgrades in its R-Design and Polestar models, detailed next, the results aren’t as visually oxymoronic as on an aero-enhanced crossover. The V60 does offer rugged design touches for those who want them, however, in the V60 Cross Country that’s also covered below.

The Volvo V60 can’t help but exhibit nimbler driving dynamics than its crossover counterparts: It’s a just a matter of physics, as Volvo’s spirited sport wagon, at 58.4 inches in height, is some eight inches shorter than CUVs of similar length; that creates a lower center of gravity for the V60 for significantly improved handling. But Volvo then takes things to the next level, and the level after that, too. The first step up is the V60 T6 AWD R-Design that’s the most powerful mass-production station wagon ever released by Volvo. Yet, while the R-Design revs up a robust 325 horsepower and 354 lb.-ft. of torque, the limited-run Polestar car produces 350 of the former and 368 of the latter. Beyond that maxed-out motor—a 3.0-liter, six-cylinder unit touting a twin-scroll turbo—the high-velocity V60 also serves up Ohlins shocks and Brembo stoppers for superior suspension and braking performance.

Many crossovers come with the usual suspects in terms of high-tech occupant protection, yet if you want more than a typical blind-spot monitor and rearview camera, you may want to make your way to a Volvo dealership. After all, the Volvo V60 does indeed supply those technologies, but as you might expect from the brand, it features a wide array of other sophisticated safety measures as well. A prime example is the V60’s pedestrian and cyclist detection system. It starts with the ability to identify pedestrians who may have stepped out into the vehicle’s path, and initiate automatic braking to mitigate an impact, and extends to the capability to also recognize cyclists (in certain scenarios). Additional highlights from the V60’s long list of standard and available safety features include road-sign information recognition, drowsy-driver alert, adaptive cruise control, and lane-keeping and lane-departure alert technologies with a dedicated lane-change merging aid.

To further rain on the crossover parade, the Volvo V60 welcomes a cloud-based infotainment system that leverages the expertise of Ericsson, the Swedish-based, multinational communications conglomerate. In fact, Volvo’s Sensus was upgraded again specifically for the 2016 model year with features like a mobile wi-fi hotspot and Internet browser. As a result, owners can access Volvo cloud-based services even without their own smartphones; on the other hand, to be clear, the hotspot does support smartphones, as well as laptops and tablets, albeit with 3G connectivity. Naturally, the V60 also checks the appropriate boxes for 3D navigation, enhanced voice recognition, and access to third-party apps for the likes of Stitcher, Pandora, Yelp and Glympse. For added security, Volvo’s On Call telematics furnishes automatic crash notification, a driver-activated SOS button and GPS tracking for first responders.

The Volvo V60 also beats crossovers at a big part of their own game. Remember, one of the key factors in the success of CUVs is their increased fuel-economy ratings as compared to body-on-frame sport-utilities. If you go by that measure, though, it’s the crossovers that have trouble measuring up to the Volvo V60. That’s because the V60 achieves EPA ratings of 25 mpg city/37 mpg highway/29 mpg combined with its standard engine. Nor do those sterling fuel-economy grades mean that the car flunks the test for driving excitement. Instead, thanks to a four-cylinder “Drive-E” turbocharged engine with direct-injection, drivers enjoy 240 horsepower and 258 lb.-ft. of torque. Meanwhile, for an extra jolt of acceleration, an overboost function can force out a further burst of twisting power, so that up to 285 lb.-ft. of torque is available during the first 10 seconds at full throttle.

The Volvo V60 even meets crossover customers half-way, with its Cross Country models. They display crossover design details such as front and rear skid-plates and protective wheel-arch cladding, along with some adventure-ready performance enhancements for owners who may find themselves off the beaten path. The V60 Cross Country sits 2.6 inches higher than the V60 proper, for instance, backed by 7.9 inches of ground clearance, and Volvo’s electronically controlled “Instant Traction” all-wheel-drive technology is standard, as is hill-descent control. The result is a relatively rugged take on the V60’s Scandinavian styling, but with the Cross Country also distinguished by larger (18-inch) standard wheels, a honeycomb-style grille insert, and gloss-black mirror caps and exterior window trim. Setting off the Cross Country cabin: standard premium comforts such as leather-surfaced contour seats and available lux touches like real wood cabin accents.

Perhaps one of the most notable reasons to buy a Volvo V60 instead of a crossover is that it provides all of its car-style competitive advantages—like its fun-to-drive demeanor and increased fuel economy—at the same time it delivers the versatility, and cargo-carrying capability folks look for in CUVs. Thus, the V60 has a generous storage area directly behind its second row of seating, and that row can be folded to create a flat load floor and a 43.8-cubic-foot space for cargo. The rear seats also can be folded separately, in a 40/20/40 setup, to allow for extra interior versatility. Moreover, it’s worth pointing out that the V60 supplements that cargo space with a large-ish tailgate opening that’s more than 42 inches wide, making it easy for owners to access the vehicle’s rear cargo hold. Hidden underfloor storage is another V60 bonus.

Crossovers cross the looks of an SUV with the smooth-riding unibody construction of a car, which is just fine for most owners. But that also means most crossovers can only tow as much as most cars—and in some cases a lot less. And for an uncommonly strong station wagon like the Volvo V60, the differences can be stark. The V60 boasts a maximum tow rating—with both its standard four-cylinder and available V6 engines—of 3,500 lbs. As of this writing, that rating is a full ton more than the top towing marks for similarly sized mainstream crossovers like the Honda CR-V, Toyota RAV4 and four-cylinder Chevy Equinox, and it’s a match for the EcoBoosted Ford Escape and V6 Equinox.

Volvo has the technology. It has the capability to build the world’s first plug-in diesel hybrid station wagon. Actually, it’s already mission accomplished in Europe, where the Volvo V60 Twin Engine model has launched with a 31-mile all-electric driving range in EV mode, a Euro-cycle mark of 130 mpg in combined driving in hybrid mode, and the ability to race from 0-60 in just 6 seconds in “Power” mode. The Twin Engine setup also enables an innovative approach to all-wheel drive, in which the vehicle’s diesel engine powers the front wheels and its electric motor handles the rears. Now, you can’t get the V60 Twin Engine model in the United States quite yet, but the same technology is expected to debut in the brand-new Volvo XC90 in the near-term future, and the brand has, in the past, promised to premiere plug-in options across the lineup. Which would include station wagons like the V60, of course. 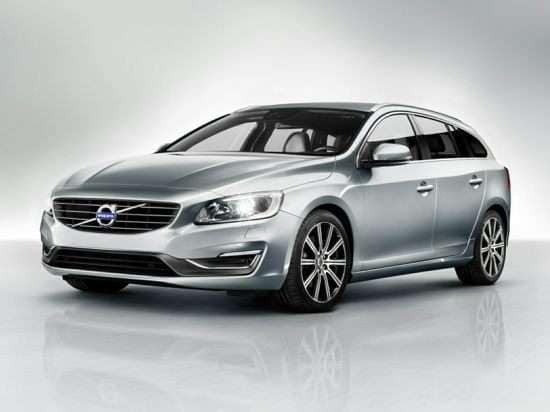