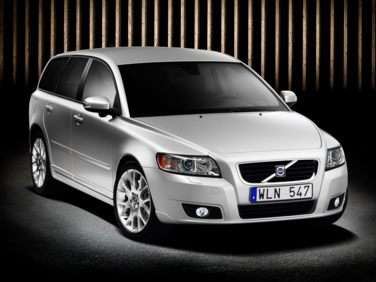 All About Volvo V50

The Volvo V50 is a four-door five passenger station wagon. The Volvo V50 was first introduced to the market at the end of 2003 at the Bologna Motor Show. The vehicle was available as a 2005 model. The vehicle is built on the same platform as the S40 sedan as well as the C30. The V50 carried on the traditional Volvo look but increased the torsion stiffness by close to 70%, which contributed to the safety levels of the vehicle as does the new font structure with crumple zones. The V50 was also available as an all-wheel drive. The 2008 Volvo V50 was fully refreshed for this year.

The EPA fuel economy rating for the Volvo V50 AWD 5 cylnder 2.5 L model is 18 miles per gallon in the city and 26 mpg on the highway.

The interior of this V50 is a nice complement to the classy exterior. There is the typical floating center stack you'll see in many Volvo designs as well as the pass through center console. There are decorative touches of aluminum inlay with large easy to read gauges.

Like all Volvo’s, this vehicle is well featured including some that you would only expect to see in the larger more expensive models. Two examples of this are the BLIS or blind spot information system and the active bi-xenon headlamp system. There is now a DVD-based navigation system available. The T5 gets a few extras like fog lamps, automatic climate control and a power driver’s seat to go along with the sportier suspension.

Some of the standalone options are geartronic automatic transmission, sunroof, 16” alloy wheels, leather seats, keyless drive, heated front seats, and even Volvo's Navigation system. Some of the special packages to consider are the Climate, DynAudio, and the Premium Packages.

Volvo has always upheld a high safety standard with all their vehicles. Standard features that are included in the Volvo V50 are stability control, anti-lock brakes with electronic brake distribution, and emergency brake assistance. There is also Volvo’s whiplash protection system as well as many air bags that cover front, rear and sides of the vehicle. Other safety features included are anti-submarine seats, collapsible pedals, daytime running lights and a collapsible steering wheel column.

The 2009 Volvo V50 is a carryover from 2008. The 2009 V50 wagon is offered in two different trim levels. The first is the 2.4i, which is outfitted with a 2.4 liter, a 5-cylinder that generates 168 horsepower and 170 lb-ft of torque. Fuel economy is rated at 20 miles per gallon in town and 31 miles per gallon in highway cruising. The T5 AWD R-Design trim offers quicker acceleration from a turbocharged, 2.5 liter, 5-cylinder motor producing 227 horsepower and 236 lb-ft of torque. Available exclusively with all-wheel drive, the T5 AWD R-Design turns in fuel mileage of 18 miles per gallon in the city and 26 miles per gallon during highway cruising. A 5-speed automatic is the only transmission available for both editions of the vehicle.