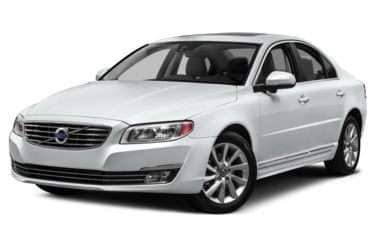 All About Volvo S80

The Volvo S80 is four-door five-passenger luxury sedan. The original Volvo S80 hit the market in 1999 as a replacement for the old S90 model. This was considered Volvo’s luxury sedan and came fully loaded for the times. In 2000 the only change was the addition of several optional packages. In 2001, the base model was boosted with features and there was the T6 Executive sedan - a flashier, more luxurious variation on the standard T6 model. In 2002, a little more power was added along with an emergency trunk release for every vehicle. For 2003, there were minimal changes and 2004 saw an all-wheel drive variant join the lineup. Changes in 2005 saw flat run tires and wood trim on the inside. In 2006, a turbocharged engine was put in the largest of the sedans and the T6 and Premier models were discontinued. Minimal changes were done again in 2006 but for 2007, the vehicle received a complete redesign which helped to boost interest in the vehicle once again.

By 2008, the Volvo S80 is firmly established as a lot of car for a whole lot less money than the competition. This vehicle is offered in three trims - 3.2, T6 AWD, and V8 AWD. Under the hood of this vehicle is a 3.2 L inline six-cylinder engine offering 235 horsepower. The T6 AWD variation has a 3.0 L turbocharged engine that offers 281 horsepower. The V8 AWD comes with a 4.4-liter V8 engine that produces 311-horsepower. All of the S80 engines are matched to the six-speed Geartronic automatic shifting, which allows the driver to manually shift the gears for more control.

The EPA fuel economy rating for this 3.2 trim is 16 miles per gallon in the city and 24 mpg on the highway. The interior of the vehicle is a nice match with the exterior, offering loads of passenger room and cargo space for long trips. The driver’s comfort is taken care of with the ergonomically designed power front seats with memory setting, electronic climate control, and a premium sound system.

Part of the charm of the Volvo vehicles is the amount of popular features they include in every car. Standard features include cruise control, power sunroom, wood inlay trim, Regor 17-inch alloy wheels, a tilt, and telescopic leather-clad steering wheel that have the controls attached for cruise and audio. There are also power heated mirrors, power seats, split folding rear seats, leather upholstery, and an auto-dimming rearview. Stepping up to the T6, there is also all-wheel drive with Instant Traction, power parking brake, 17-inch alloy wheels, and a dual exhaust system. The V8 AWD adds even more extras like a personal car communicator.

There are four optional packages to help customize. For example the Climate Package adds in rain-sensor windshield wipers and heated front and back seats. The Sport Package offers Volvo’s Four-C dynamic chassis, bi-xenon headlights, and even a special sensitive steering. There is also a Collision Avoidance Package, and the Dynaudio Package to consider as well as several standalone options like Volvo’s Blind Spot Information System.

Volvo has a high safety standard that shows throughout their lineup. The Volvo S80 includes as standard Volvo’s whiplash protection seating and energy-absorbing frontal structure, a reinforced passenger compartment as well as four years of roadside assistance. Other features include anti-lock brakes with electronic distribution, anti-skid control, intelligent air bags, and an anti-theft system.