Introduction
By Christian Wardlaw
Volvo C70 – Driving Impressions: Highway 1 runs from San Diego to Seattle, mainly along the beaches and cliffs that line the western coast of the United States. Perhaps the most famous, and well traveled, stretch of this fabled road ribbons between the quaint seaside hamlet of Cambria and the tony enclave of Carmel in central California, and it was on this stretch of road at the height of the summer tourist season that we put the redesigned Volvo C70 to the test. Susceptible to hourly, sometime dramatic changes in climate, a busy Highway 1 was the perfect way to determine if the new C70's complex retractable hardtop is worth the added expense it brings to the bottom line, to learn if its turbocharged five-cylinder engine could get the job done, and to see if it possessed the same focus on comfort as its predecessor.

What of performance and handling? Highway 1 was not the appropriate venue, clogged as it frequently is with lumbering RVs and minivans full of rambling rubberneckers. For that, we selected California 58, out near where James Dean met his fate in the Lil' Bastard, out where nobody drives because there's nowhere to go. All whoops and dips and curves and straights, California 58 is a driver's dream, and leads from the state's main artery, Interstate 5, across to the coast. It was here that we put the Volvo through its paces from a performance standpoint.

Based as it is on the same foundation as the S40 sedan and V50 wagon, one might conclude that the new C70 is a decent performer, and that conclusion would be accurate. A turbocharged 2.4-liter inline five-cylinder engine is shared with the S40 and V50, making 218 horsepower at 5,000 rpm and 236 lb.-ft. of torque spread across the rev range between 1,500 and 4,800 rpm. Those numbers might not sound impressive, but that fat wad of torque makes the C70 feel brisk from the driver's seat. A six-speed manual transmission drives the front wheels, but our test car had the optional six-speed Geartronic automatic. Four-wheel-disc antilock brakes with electronic brake-force distribution came in handy on more than one occasion, slowing the standard 17-inch wheels and 235/45 Michelin Pilot all-season tires. The C70 rides on a MacPherson strut front and multi-link rear suspension, and a stability control system keeps the car in line and moving in the right direction.

For a luxury car, this is standard-issue hardware – nothing to call out as special. What's special about the Volvo C70 is its retractable hardtop, which completely lowers in 33 seconds and raises in 31 seconds. The hardtop separates into three sections, arcs rearward, and stacks neatly into the trunk, transforming the C70 from a quiet and stylish coupe to a leather-lined sun tanning bed for four. Because it's a hard top, it better isolates the C70's occupants from foul weather, protects against theft, and maintains serenity in the cabin during rush-hour traffic. The major downside is that it robs more than half of the space in the 12.8 cu.-ft. trunk, but leaves enough room for two good-sized suitcases and a carry-on bag.

Prices start at $39,405 including the $695 destination charge. The standard equipment list is generous, including all of the comfort and safety features that customers expect on a luxurious convertible – well, except seat heaters. Unique features worth discussing, in addition to the trick roof, mainly pertain to safety, from the Volvo Intelligent Vehicle Architecture (VIVA) which channels crash energy away from the passenger compartment and the Whiplash Protection Seating System (WHIPS) to the Roll Over Protection System (ROPS) that fires twin roll hoops from behind the back seat in a rollover accident and the Side Impact Protection System (SIPS). That last feature includes door-mounted side-curtain airbags that deploy upward to provide protection even when the roof is lowered, and Volvo is one of the first to market with this kind of system.

Options include the Geartronic automatic transmission, bi-Xenon headlights, rear parking assist, a navigation system, and three main option packages. The Premium Package adds leather upholstery, a Homelink universal transmitter, and a compass in the rearview mirror. The Dynaudio Package – worth every penny – includes 12 Dynaudio speakers, amplifiers, and a subwoofer. The Climate Package includes rain-sensing wipers, headlight washers, and heated front seats. Inexplicably, metallic paint is also an option on the Volvo C70. Our Volvo C70 included the automatic, the Premium Package, and the Dynaudio Package for a grand total of $44,075.

What we learned from our weekend road trip up the coast of California was that the Volvo C70 is not a car made for enthusiasts, though it is thoroughly enjoyable to drive. We learned that retractable hardtops are superior to fabric soft tops, though we cannot know if that is true once the warranty has expired. We learned that Volvo knows how convertible owners use their cars, and that it still builds incredibly comfortable vehicles, even if heated front seats aren't standard. Finally, we learned that the Volvo C70 offers an appealing and sophisticated alternative to the major player in this category, the BMW 3 Series. At least so long as you're taking Highway 1 and not California 58.

The C70's interior is a bit austere for some, but I really like the waterfall center panel and “floating” dashboard. Notice that there's no chrome to glint in sunlight – the trim is all aluminum, which cuts down on glare and really came in handy during our trip up the California coast. Designers might consider adding contrast between the medium and light gray shades in our test car, though, and we thought it odd that the glovebox handle is black and rest of lower dash is light gray. 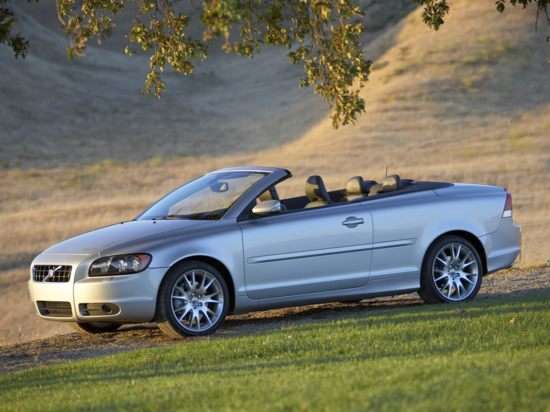