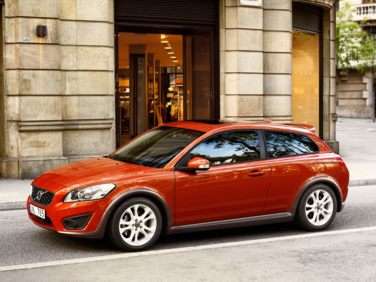 All About Volvo C30

The Volvo C-30 is a four-passenger front-wheel drive two-door coupe. The Volvo C30 was a concept car first unveiled at the Detroit Motor Show in early January 2006. The car appeared later that year in Paris. Now in 2008, the Volvo C30 has earned a solid name for style, safety and performance. Under development is a hybrid electric C30. This concept car was introduced at the September 2007 Frankfurt Auto show. This vehicle is expected to be a Flex Fuel or a diesel-electric hybrid. The plan is to have the vehicle travel approximately 60 miles on battery power and be able to fully recharge from a home outlet in under three hours.

The Volvo C30 is offered in two trims – T5 and T5 R-Design. Under the hood of both vehicles is a 2.5 L turbocharged inline five-cylinder engine that produces 227 horsepower. There are two transmission options. The engine is matched to either a six-speed manual gearbox or a five-speed automatic transmission with Geartronic manual selection.

The interior of the vehicle has four separate seats, which comfortably holds four full sized adults with some room left over for cargo. However, anyone sitting in the rear seats may find the headroom and legroom challenging. The rear cargo hold has a capacity of 12.9 cubic feet. For comfort, it would be hard to complain. The instrument panel has large dials that are easy to read and the seats sport Volvo’s T-Tec upholstery. There’s a center console with a leather-wrapped steering wheel and shifter knob to finish off the look.

As you’d expect of any vehicle looking to attract new drivers, the Volvo C30 comes very well equipped for its price. Standard features included with this car are air conditioning, steering wheel with audio controls, keyless entry and leather trim as well as an eight speaker sound system with 160 watts. If you step up to the Version 2.0 then you add in 18-inch alloy wheels, polished exhaust pipes, Sirius Satellite Radio, and an improved sound system – the 650 watt Dynaudio with ten speakers and Dolby surround. All of this and Volvo’s Dynamic Chassis Control system for improved handling. There are some standalone options available including a power moonroof, leather upholstery, a navigation system and a power driver’s seat. There is a Preferred Package and a Climate Package, which adds in heated seats, rain sensitive wipers and headlamp washers.

Volvo has long held their vehicles to a high safety standard. This car is no different. It comes fully loaded with safety features like front, inflatable side curtain airbags and anti-lock brakes with electronic brakeforce distribution. Standard is their dynamic stability control, traction control and Volvo’s own whiplash protection system called WHIPS. Structurally, the Volvo C30 has a reinforced passenger compartment and energy – absorbing frontal body. There is the SIPS system or side impact protection system as well as head restraints for all seats. In the case of an accident, the steering column collapses and there is an energy absorbing interior to help minimize the impact.

The 2009 Volvo C30 is a carryover from 2008. The 2009 C30 is available in both the T5 and R-Design trims. The entry-level T5 and the more upscale R-Design each use the same turbocharged, 2.5 liter 5-cylinder engine. This unit produces 227 horsepower and 235 lb-ft of torque, and is rated at 19 miles per gallon in city driving and 28 miles per gallon during highway cruising. A 6-speed manual transmission is provided as standard equipment, while a 5-speed automatic transmission with manual shifting capabilities is also available for each trim level.