The Volkswagen Touareg is a four door five passenger SUV that is available in an assortment of well styled choices that burn everything from gasoline to diesel and even a few electrons.  The $42,975 entry level Touareg V6 Sport is powered by a 3.6 Liter FSI direct injected six cylinder that makes 280 HP and 265 lb-ft of torque being channeled through an 8 speed Tiptronic automatic gearbox and gets an estimated 16 MPG in the city and as much as 23 MPG on the highway.  V6 Sport models are distinguishable by their 18 inch Tacora alloys, HID headlamps with LED daytime running lights, Bluetooth hands free connectivity and an 8 speaker AM/FM/XM touch screen stereo with USB and Auxiliary inputs for mobile media storage devices.
The $44,995 V6 Sport with Navigation includes all the goodies that come standard with the base Touareg but also the RNS 850 touch screen navigation system as well.  The VW Touareg V6 Lux is upgraded with luxurious amenities like larger 19 inch alloys, a tinted power panoramic sunroof as well as a walnut interior with metallic surrounds and leather upholstery for $48,855 and the V6 Executive gets 20 inch rollers and a premium 10 speaker stereo as well as keyless entry and a push button starter, bringing the asking price up $54,555.
The Touareg TDI Sport gets its name from the 3.0 Liter turbocharged and direct injected TDI V6 clean diesel that produces 225 HP and 406 lb-ft of torque with an estimated return of 19 MPG in the city and as much as 28 MPG on the highway, wearing a set of 18 inch rims, starting at $46,475.  The $48,495 TDI Sport with Navigation adds the obligatory touch screen navigation unit to the alternatively fueled Touareg.  Meanwhile the VW TDI Lux SUV gets the same luxurious treatment as the V6 powered version with a glass moon roof, rich Vienna leather and classy wood trim for $52,355 and the TDI Executive follows suit with the 20 inch wheels and Dynaudio premium stereo for $58,055.
The top of the line Touareg Hybrid gets all the lavish features of the well equipped Lux models, but gets its power from a gasoline burning 3.0 Liter supercharged V6 combined with an electric motor to produce a total of 380 HP and 425 lb-ft of torque while returning an estimated 20 MPG in the city and as much as 24 MPG on the highway starting at $61,410.
Similar SUVs include the BMW X5, the Infiniti FX35 and the Range Rover Land Rover Evoque.
Learn about the 2012 Volkswagen Touareg. 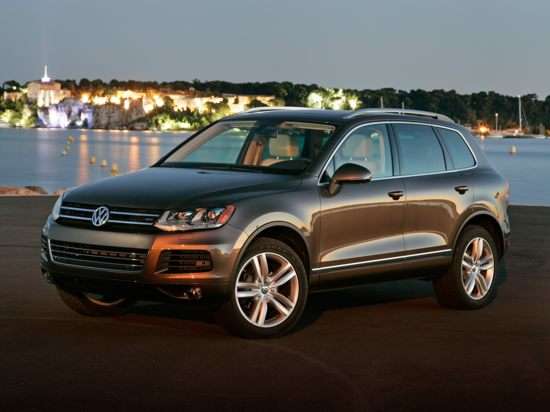