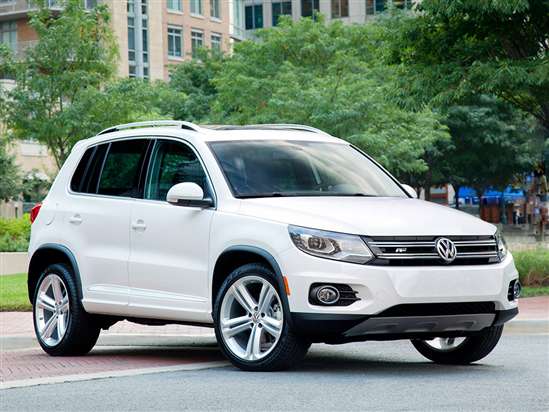 Changes for the 2014 Volkswagen Tiguan:

Volkswagen adds automatic climate control to the Tiguan SE, a popular model now offered with keyless passive entry with push-button ignition, a reversing camera, and Volkswagen’s new Car-Net telematics system. The Tiguan SEL gets a new Fender premium audio system, and a new R-Line model debuts at the top of the lineup, equipped with a sport suspension and appearance modifications. The SUV's Carefree Maintenance plan is reduced to two years or 24,000 miles of coverage for the 2014 model year.

All Tiguan models are equipped with a turbocharged, 2.0-liter 4-cylinder engine that makes 200 horsepower and 207 lb.-ft. of torque. The Tiguan S is equipped with a 6-speed manual gearbox and front-wheel drive. A 6-speed automatic transmission is optional for the S model and standard on other Tiguans. All trim levels can be optioned with a 4Motion all-wheel-drive system.

According to the EPA, in combined driving the 2014 Tiguan is rated to return 21 mpg with the manual gearbox and 23 mpg with the automatic transmission. Add 4Motion all-wheel drive, and the Tiguan is expected to get 23 mpg.

According to the National Highway Traffic Safety Administration, the 2014 Tiguan receives an overall crash-test rating of 4 stars. Note, though, that the overall frontal-impact rating is 3 stars.

As this summary is written, the Insurance Institute for Highway Safety (IIHS) has not officially rated the 2014 Tiguan. Last year, the IIHS gave the Tiguan a “Good” rating in all assessments except for the difficult new small overlap frontal-impact test, for which the SUV received a “Marginal” rating.

For 2014, Volkswagen offers its new Car-Net telematics system for the Tiguan. Car-Net comes with a free 6-month subscription to service, which includes features such as remote diagnostic checks, remote vehicle access, and safety features such as Speed Alert, Boundary Alert, and Automatic Crash Notification.