The 2012 Volkswagen Tiguan is a four door five passenger compact crossover utility vehicle powered by a 200 HP 2.0 Liter TSI four cylinder shifted with a six speed automatic with Tiptronic as well as 4Motion all wheel drive to go along with the completely redesigned exterior, not to mention that it is good for an estimated 22 MPG in the city and as much as 27 MPG on the highway.  The Tiguan comes with 56.1 cubic feet of cargo space thanks to items like a fold flat front passenger seat as well as available convenience features like keyless access with push button start.

Starting out at $22,840 the base 2012 Volkswagen Tiguan comes equipped with an AM/FM/CD/MP3 stereo, 40/20/40 split rear seating and a 3 year 36,000 mile warranty.  Meanwhile the $25,940 S with Sunroof adds Bluetooth hands free connectivity along with a power sliding panoramic glass roof.  The next step up is the $28,635 SE that adds a set of stylish 18 inch wheels, Sirius satellite radio, a touch screen premium sound system, leather wrapped multifunction steering wheel as well a few key chrome exterior accents.  For $30,525 the SE gets upgrade with Sunroof & Nav.

The $33,975 SEL gets a set of 19 inch wheels, touchscreen navigation standard, power adjustable drivers bucket wrapped in V-Tex leatherette upholstery as well as dual zone automatic climate control and a set of brilliant bi-xenon headlights with LED daytime running lights.  The SEL with Premium Nav climbs up to $34,995 while the Dynaudio premium sound system takes the total up to $38,080.  Not to mention that the 2012 Volkswagen Tiguan is an IIHS Top Safety Pick. 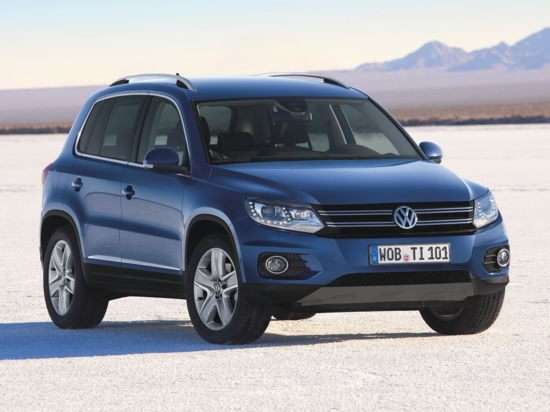