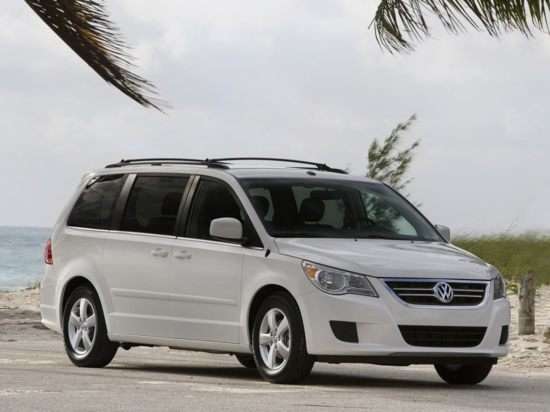 When it comes to minivans, Chrysler has been the top seller since it “invented” the segment in 1984. Pundits, on the other hand, point out the fact that Volkswagen had a minivan in the 1960s - the Transporter, a.k.a. the loveable little Microbus. It only made sense then that when VW wanted to introduce a minivan, it partnered up with the Chrysler Corporation to produce the 2009 Volkswagen Routan.

Contrary to popular belief, this platform sharing is more intense than just a little badge engineering. VW spent hundreds of millions of dollars to create exclusive exterior and interior designs as well as improved handling capabilities that buyers have come to expect from the German automaker. With a history of vans that include the aforementioned Microbus and the Eurovan, how will VW’s all-new Routan stack up against its modern competition like the Honda Odyssey, Toyota Sienna, Nissan Quest or Hyundai Entourage?

Volkswagen’s first step on the Routan was to come up with a design that was both completely separate from the Chrysler vans and, more importantly, worthy of the VW badge. In the end, only the four side doors and roof are shared across brands – all other sheet metal is completely original. While the Chrysler vans are both stylish vehicles, the Routan has a little more character with the VW-signature headlamps and a long sloped hood. One notable departure from other VW models is the lack of a large chrome shield grille, which in this case is a good thing. The most beneficial change the Routan makes over the Chrysler vans is the redesigned D-pillar and liftgate. The rear of the new Routan is more shapely and stylish than the Chrysler twins and allows it to tie in better with other VW vehicles. Since the Routan is being marketed as more of a high-end minivan, any direct shopping between the Dodge Grand Caravan or Chrysler Town & Country should be minimal.

One of the things we’ve noticed when driving new Volkswagen vehicles lately, is the fine attention to detail on the interior, and the Routan SEL we tested did not disappoint. Compared to the Chrysler Town & Country, the Routan features plusher carpet, softer leather on the seats and door panels, more supportive seats and a completely redesigned instrument panel. To allow for optimal comfort, VW chose not to use Chrysler’s second-row Stow N’ Go or Swivel N’ Go seating. The base Routan S does offer a second-row bench seat, but the higher trim levels get two rows of bucket seats and the Stow N’ Go third row seat, which easily fold flat into the rear cargo hold or tilt back into a tailgate-friendly position either with the use of integrated nylon straps or optional power control. In addition to the power-folding third-row seat, the Routan also comes with the option for power sliding side doors, power liftgate and a rear view camera.

While the Routan’s interior has a genuine focus on comfort, the storage capabilities are quite impressive. The center console has three tiers of storage space in addition to the top bins and quartet of cupholders, while the instrument panels features a good-sized storage compartment located above the spacious glove box. In all, front seat passengers have access to three power outlets. Under the second-row seat floorboards are two spacious cubbyholes that are lined with plastic for item that might be wet or muddy, but getting into these bins proved to be slightly difficult if the front seat is too far back. Finally, the large compartment where the rear seats fold into proves to be quite useful for storage when the seats are up. The Routan SEL we was equipped with the optional $3,100 rear-seat entertainment system that offers two separate LCD screens for those in the second and third rows.

Under the hood, the Routan shares the majority of its components with the Chrysler twins, so the “German engineering” part of the Routan was our biggest doubt. We were able to experience both V-6 powertrain options of the Routan, a 197-horsepower 3.8-liter and 251-horsepower 4.0-liter, and we felt the latter was smoother, quieter and felt more refined than the base engine. While both engines available are carried over from Chrysler’s parts bin, Volkswagen did spend extensive time and money upgrading the steering, suspension and the transmission’s ship points to give the Routan a more European feel. Don’t think that the Routan will be able to handle a turn like an R32, but the Routan exhibited tighter steering and significantly less body roll in curves than its Pentastar cousin.

Like all other VW models, the Routan comes with the Carefree Maintenance Program and Stability Control as standard features. The Carefree Maintenance provides all suggested maintenance work free of charge during the basic warranty period (three years or 36,000 miles). One disadvantage the Routan has compared to the assembly-line relatives is the lack of Chrysler’s lifetime powertrain warranty.