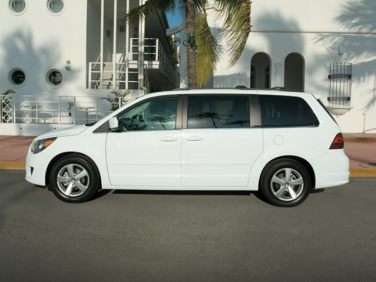 All About Volkswagen Routan

The Volkswagen Routan is a five-door, seven passenger minivan. Volkswagen is a car company with serious ambitions when it comes to the North American marketplace. Perhaps sensing the opportunity that has arisen given the ebbing tide of domestic automobile sales, their stated goal is to triple their sales in the United States alone in the next 4 years. In order to accomplish such a feat, they are looking to diversify their product line to include a wider array of models. One of the new vehicles to come from VW as a result of this strategy is the 2009 Volkswagen Routan.

The Routan has been designed in conjunction with Chrysler, and it is being assembled at the Chrysler plant in Windsor, Ontario. Both the appearance of the Routan and the circumstances surrounding its conception and construction have lead many to posit that the Routan will be extremely similar to the Chrysler Town and Country minivan. Initial photographs released by VW seem to support this theory. The Routan is a 7-passenger minivan that bears far more resemblance to a Chrysler product than it does to the Vanagon or the Eurovan that preceded it. The base model Routan will be powered by a Chrysler-sourced 3.8 liter V6 engine which produces 197 horsepower and 230 lb-ft of torque. A 251 horsepower 4.0 liter V6 is also optional. Both engines are mated to a 6-speed automatic transmission, and Volkswagen says that the suspension will be tuned to reflect ‘European’ handling. The vehicle will also feature Chrysler’s Electronic Stability Control, which interestingly enough was developed in conjunction with another German automaker, Mercedes-Benz.

On the inside, the vehicle is again reminiscent of a domestic minivan. Each row of rear seating will have its own 9-inch LCD screen in order to watch DVD’s, and the cabin is replete with 12 and 115 volt power outlets. A large number of cup holders also dot the vehicle’s landscape, along with heated leather seats. A touch screen navigation system will be provided for drivers, as well as power sliding doors and a power rear lift gate. HID headlights round out the list of premium features that Volkswagen is hoping will help people differentiate the Routan from its Dodge and Chrysler siblings.

Market share is indeed valuable for a growing car company like Volkswagen, but protecting brand identity is an equally important, especially for a company like VW which has built its core around excellent driving characteristics and a joyful spirit. Try as they might, there is usually not a lot of fun associated with a minivan, as it is purpose-built automobile designed to play a very specific role. Most of Volkswagen’s utilitarian vehicles are sold outside of North America where Volkswagen has a broader public image. However, the same comments were made when Porsche decided to branch away from sports cars and introduce a sport utility vehicle, a move which has worked out well for them in the long run. This indicates that if the quality level of the Routan is high enough, then Volkswagen may be able to build a successful second act into their vehicle lineup.