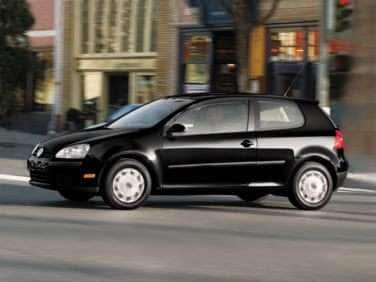 All About Volkswagen Rabbit

The Volkswagen Rabbit coupe is a two-door, five passenger compact hatchback, and the Rabbit sedan is a four-door, five passenger compact hatchback. The Volkswagen Rabbit was one of the first modern German hatches to really catch on with American buyers. The first generation of Rabbit went on sale in 1974, and it proved that there was a substantial market in North America for a well built, front-wheel drive compact hatch. The Rabbit was intended to replace the aging Beetle in VW’s lineup, and it performed the task admirably. The Rabbit was re-named the Golf when the next generation was introduced in 1983, but Volkswagen reverted to the Rabbit name in 2007, in keeping with the company’s habit of using multiple monikers denoting the same platform in different geographical regions.

The Volkswagen Rabbit is an exercise in simplicity. There are no complicated trim levels to navigate, and even engine choice has been eliminated. Both the two-door and the four-door Rabbit are powered by Volkswagen’s ubiquitous 170 horsepower 2.5 liter 5-cylinder motor. The 177 lb-ft of torque really help to get the small hatchback moving, although a 3000 lb curb weight keeps the acceleration to 60 miles per hour down to around 8 seconds. A 5-speed manual or 6-speed automatic transmission are available in either version of the Rabbit.

The two-door and four-door share many of the same features – power windows and locks, cruise control, standard anti-lock brakes and traction control, along with the same stereo system and wheels. The four-door offers greater creature comforts when it comes to standard equipment, adding adjustable front seats, heated windshield washer nozzles and side mirrors, and satellite radio. The sedan version of the Rabbit is obviously more comfortable when it comes to transporting passengers in the rear seats, but despite the small size, interior room is comparable to the full-size Volkswagen Passat. Trunk space is excellent, and the rear seats fold forward to give even more cargo capacity.

The low-rpm availability of the 5-cylinder engine’s torque goes a long way towards making the Volkswagen Rabbit feel quick around town. The vehicle’s 4-wheel independent suspension helps keep the car under control on twisty roads and over broken pavement. While driving enthusiasts will likely choose the manual transmission, the 6-speed automatic is adept at gear selection, and can be counted upon to make the right choice at the right time. Fuel mileage is decent for both, reaching 30 miles per gallon on the highway and 22 miles per gallon in city driving.

While the days of the lightweight, throw-it-through-the-corners Rabbit may be gone, the maturation of the platform has created a hatchback which is more refined, capable and comfortable than the original Rabbit ever was. The one possible downside of the new Rabbit is the fact that the platform-sharing which has become the norm at Volkswagen has somewhat watered down their lineup, until it largely becomes a matter of stylistic preference and not driving characteristics which determines which vehicle a buyer purchases. Since the overall experience moving from the Jetta to the Rabbit to the New Beetle is quite similar, Volkswagen runs the risk of diluting their brand in a manner similar to what General Motors experienced in the 1990s.