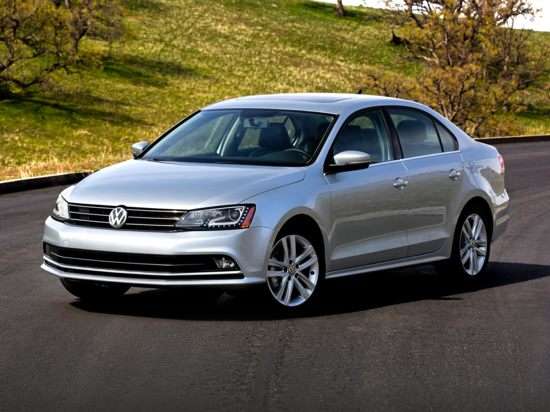 Changes for the 2015 Volkswagen Jetta:

Subtle styling changes identify the 2015 Jetta, which is now offered only as a 4-door sedan. The TDI Clean Diesel models have a new engine, fuel economy numbers improve for some models, and Volkswagen offers new safety technologies for the Jetta. A limited-edition 1.8T Sport model is also available for the 2015 model year.

Jetta buyers choose between the 2.0L, the 1.8T, the GLI, the TDI Clean Diesel, and the Hybrid, each equipped with a unique powertrain. Within each series, various trim levels and equipment packages denote the differences between the different versions of the Jetta.

The least expensive Jetta is the 2.0L, equipped with an aged 2.0-liter 4-cylinder engine generating 115 horsepower. A 5-speed manual gearbox is available, but most Jetta 2.0L models are equipped with a 6-speed automatic transmission.

Upgrade to the Jetta 1.8T and you’ll improve your ownership experience. This model is equipped with a turbocharged 1.8-liter 4-cylinder engine making 170 horsepower and plenty of torque, at the same time that it gets superior gas mileage. A 5-speed manual transmission is standard, with a 6-speed automatic available as an option.

Jetta TDI Clean Diesel models have a new turbocharged, clean diesel engine displacing 2.0 liters. It makes 150 horsepower and 236 lb.-ft. of torque, and can be paired with a 6-speed manual or 6-speed DSG transmission.

Volkswagen also offers a Jetta Hybrid model equipped with a turbocharged gas-electric hybrid powertrain that makes just as much power as the Jetta 1.8T models. Capable of traveling short distances at speeds up to 44 mph on electricity alone, and equipped with a coasting feature designed to maximize fuel economy, the Jetta Hybrid is offered only in SEL Premium trim for the 2015 model year.

The least expensive Jetta 2.0L is also one of the least fuel-efficient versions of this small sedan, rated to get between 26 mpg and 28 mpg in combined driving, with the automatic transmission less thrifty with each gallon of gas. Only the comparatively powerful Jetta GLI is rated lower, at 26 mpg to 27 mpg, depending on transmission choice.

The most fuel-efficient Jetta is also the most expensive Jetta, the Hybrid model, at 45 mpg in combined driving. Most people get the Jetta 1.8T or Jetta TDI Clean Diesel models, the former rated to return between 29 mpg and 30 mpg, and the latter delivering 36 mpg.

According to the NHTSA, the 2015 Jetta earns a 5-star overall crash-test rating. The Insurance Institute for Highway Safety (IIHS) has not officially rated the 2015 Jetta for crash protection as this summary is written.