Like a number of other entries in the VW lineup, the 2014 Volkswagen Jetta is phasing out its long-running 2.5-liter, 5-cylinder engine—standard on the 2013 VW Jetta SE and SEL—for a newly designed 4-cylinder turbo that displaces 1.8 liters and also features direct injection. The fresh power supply delivers the same 170 hp as the old one, but the new powertrain technologies help it increase torque by 7 lb.-ft., for a total of 184, while also boosting fuel efficiency.

The enhancements are fairly strong, too. When configured with a manual transmission, the 2014 VW Jetta improves its performance by 13 percent/8 percent/15 percent to reach 26 mpg city/36 mpg highway/30 mpg combined; when the same engine is mated to an automatic transmission, the EPA ratings of the 2014 VW Jetta jump by 4 percent/16 percent/11 percent and climb to 25 mpg city/36 mpg highway/29 mpg combined. (A new electromechanical power-steering setup, replacing the current hydraulic system, also helps to reduce fuel consumption in the 2014 VW Jetta.)

Of course, the upgrades to the 2014 VW Jetta go beyond its greener footprint. Along with its turbocharged torque bump, the car also gets a noticeable performance enhancement from its new multilink rear suspension for sharper reflexes and improved driving dynamics (in all but the base model).

Volkswagen also is making a move to catch up on the technology front by deploying its new VW Car-Net telematics platform across key members of the lineup, and naturally that includes the 2014 VW Jetta. The setup includes a wide variety of functionalities, ranging from automatic crash notification to boundary and speed alerts to assistance with locating stolen vehicles.

Finally, various individual members of the 2014 VW Jetta lineup are fine-tuned as follows …

The 2014 Volkswagen Jetta sedan will continue to offer three other powerplant alternatives in addition to the new 1.8-liter turbo, including a naturally aspirated 4-cylinder engine with 2.0 liters of displacement, standard on the Jetta; a clean-diesel engine capable of up to 42 mpg highway in the 2014 VW Jetta TDI; and a performance-oriented GLI model that rocks a 210-hp 4-cylinder turbo with 207 lb.-ft. of torque.

Then, additional changes throughout the Jetta family include:

The 2014 VW Jetta SportWagen has gotten some attention as well, along with LED license-plate lights and, in TDI models, a rearview camera setup. Note, however, that the station wagon version of the 2014 VW Jetta soldiers on with that 2.5-liter 5-cylinder engine under its hood, with the clean-diesel powerplant as the only option.

The 2014 VW Jetta team is expected to begin reaching dealerships later this summer. 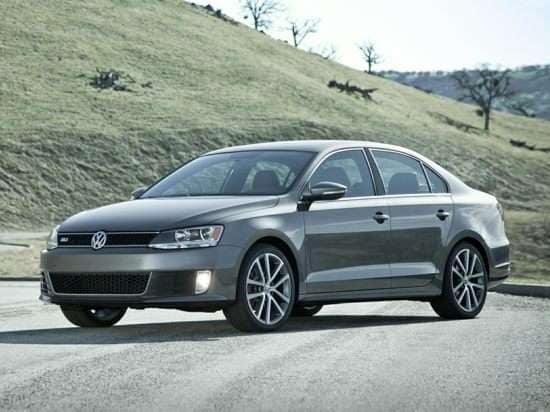