The 2009 Volkswagen Jetta TDI is the German People’s Car makers latest mileage fighter to take to U.S. streets. The Jetta TDI, when mated to its six-speed automatic transmission gets an EPA estimated 29 mpg city and 40 mpg hwy. If that’s not green enough for you, Volkswagen is also doing its best to make the competition green as well…with envy. The Beetle builder contracted with independent research company AMCI to do their own real world testing of the Jetta TDI and they found the 2009 Volkswagen Jetta TDI to get 38 mpg city and 44 mpg hwy. Still not enough? How about sponsoring a husband and wife team to break the world’s record for mileage in a trip across the United States? John and Helen Taylor set the Guinness Book of World Records for average mileage driven across the United States at 58.8 mpg in a 2009 Volkswagen Jetta TDI.

After a mileage-inspiring speech from the husband and wife team, my automotive journalist brethren and myself were handed the keys to a parade of TDIs awaiting us along the curb in front of our hotel. We were encouraged to eek out the best possible fuel economy out of the diesel Jetta, not drive it like an entry in the TDI Cup which uses a modified version of the Jetta TDI in the race series.

The 2.0-liter, four-cylinder diesel was surprising as we stepped on the gas to merge into traffic on Pacific Coast Highway. It had a bit of a snap to it as it jumped into the never ending stream of cars making their way north through Santa Monica along the Southern California coastline. However as the six-speed automatic transmission began to wind through the gears in pre-programmed fuel sipping shifts at 2,500 rpm, the 2009 Volkswagen Jetta TDI lost its nimble, spunky feel and quickly became another commuter car to get passengers from here to there with as little fuel as possible. But this isn’t a bad thing. This is what the consumer has asked for and Volkswagen delivers. Switching over to sport mode helps brings back some of the fun by bumping the shift points to 4,500 rpm, but unfortunately, still feels clunky.

As with all new generation diesels, the gravelly rattle of the engine is a thing of the past, and this 2009 Volkswagen Jetta TDI oil-burner actually seems to sound better and thrive at higher rpm even though peak torque is achieved between 1,750 and 2,500 rpm. There is a definite dead zone in third gear, but there seems to be plenty of torque across the entire rev range, so any flatness in acceleration we have to attribute solely to the automatic transmission.

In California it’s not uncommon to see a Toyota Prius scooting down the freeway at 85 mph. It’s obvious the left state not only wants green cars, but wants them to perform too. So even though we were supposed to be maximizing our economy, we are still forced to wonder: Where are the paddle shifters on the 2009 Volkswagen Jetta TDI? That’s all that's truly needed to bridge the gap between economy and fun.

Transmission aside, the 2009 Volkswagen Jetta TDI is an entertaining drive. As we left PCH for the canyons of Malibu my co-driver and I took turns further ignoring the advice of our hosts and pitched the Diesel Jetta through sharp curves and barreled down steep grades. It’s easy to see why there is a TDI Cup, this car is natural performer. With the usual amount of predictable understeer found in most production cars, we found the Jetta TDI to have light responsive steering with good center feel.

No matter how hard we pushed it, the Jetta held its course. Normally when a car sticks to the road this well, there is a price to pay in comfort, but that price is small in the TDI. No matter how we tossed it, the TDI stuck to the road. The only thing we found that would unsettle it were rough bumps in the road which would cause the Jetta to skitter sideways for an instant as it regained its footing. This is a car you’ll be very happy commuting in during the week and enjoy driving twisting two-lane over the weekend.

Braking was disconcerting as the pedal continued to ease toward the floor when pressed hard leaving us wondering which space would disappear first, the distance between the pedal and the floor, or the distance between the TDIs front bumper and the bumper of the car in front of you. Once accustomed to the ever shrinking pedal, it was easily compensated for, but nerve-racking if you’re not prepared for it.

The interior of the 2009 Volkswagen Jetta TDI is comfortable. The front seats are supportive with modest bolstering, but more would be appreciated when pushing the TDI hard around corners. All of the controls are within easy reach and easily manipulated. The layout is not as well appointed as higher end VWs, but is still comfortable enough to be livable in a day to day commute.

The back seat is a different story. The seat as well as the back are flat and bench like and offer no support. Short trips will be all that back seat passengers can endure especially if using the rear seat at the specified capacity of three. The center seat back folds down into an armrest for the outboard passengers when not in use, and makes for an ever harder seat back then those of the outer positions. Shoulder room is also tight for three across, so think small passengers only if you need a rear seat that accommodates three.

Complaints about the 2009 Volkswagen Jetta TDI are minimal. An uncomfortable rear seat, a pedal feel preference for the brakes and a lack of paddle shifters. But when you consider all you do get, the Jetta TDI is a steal. Finding a happy medium between performance and economy is a tough challenge and Volkswagen got it right. Achieving 40 mpg, maybe even more depending on how you drive, is a fair trade for the ability to fearlessly zip through canyons when the urge strikes. As a four-seater for around town fun and daily commuter service, the Jetta TDI is hard to beat. 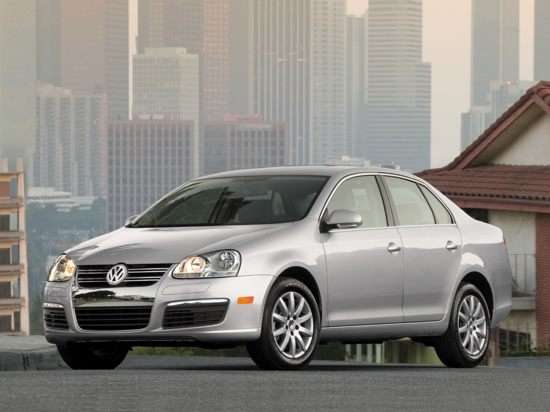