Volkswagen has been touting the new 2013 VW Jetta Hybrid as the fastest vehicle in its class—based on its ability to sprint from 0-60 in under 9 seconds—but that may be understating the case a bit. After all, a specially modified version of the car just blistered its way to a new land speed record at the famed Bonneville Salt Flats in Utah. Not only did the Jetta Hybrid crack the 300 km/h barrier on one pass, hitting 187.147 mph, but it also established a new class mark by averaging 186.313 mph on two runs (as required by the Southern California Timing Association to officially achieve the record).

2013 VW Jetta Hybrid: A Quick Look at a Record Run

2013 VW Jetta Hybrid: A Quick Look at a Record Run

Of course, Volkswagen’s R&D team did do some work on the car to prep it for the Salt, lowering its suspension, fitting it with unique wheels and tires, and modifying the interior for enhanced safety and significant weight reduction. Oh, and the company also added some extra motivation under the hood, boosting output from a standard 170 hp to right around 300.

On the other hand, the changes were minor enough that the 2013 VW Jetta Hybrid achieved its record time in a production-vehicle class—for cars with forced-induction engines under 1.5-liters in displacement. (As a reminder, the Jetta Hybrid packs a turbocharged 1.4-liter I4 engine with direct injection, as well as an advanced electric motor, and the first seven-speed dual-clutch automatic transmission ever used in a hybrid.)

“We’re very proud that the Jetta Hybrid has not only posted the fastest speed for a hybrid at Bonneville, but that it has gone out and broken an SCTA land speed record as well,” said Jonathan Browning, CEO and president, Volkswagen Group of America. “Achieving this record at Bonneville shows that the all-new 2013 Jetta Hybrid is a distinctly different offering in the compact hybrid class, offering excellent fuel economy while retaining the fun-to-drive nature expected from a Volkswagen.”

The 2013 VW Jetta Hybrid is priced from $24,995 and capable of 45 mpg in combined driving, and it will be in dealerships before the end of the year. 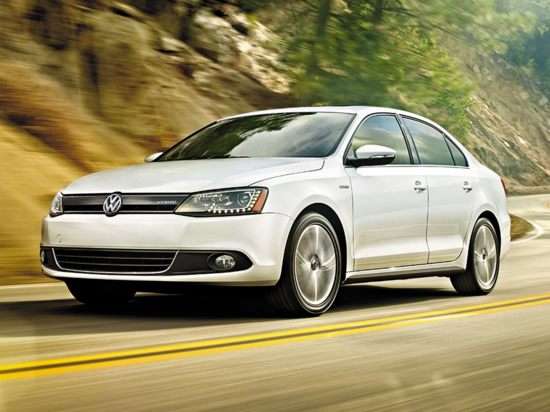