Evolution, thy name is Volkswagen.  Driving the 2015 Volkswagen GTI this past week in San Francisco, California (as well as the Golf TSI, Golf TDI, and the battery-powered e-Golf) had me realizing just how cautious the German company is when it comes to making major changes to any of its most popular automobiles.  You can certainly count the Golf and GTI in amongst that category, as they account for the majority of VW’s North American volume.

That’s not to say that the 2015 Volkswagen Golf and 2015 Volkswagen GTI are carbon copies of the models that came before them – far from it.  There’s a new platform underpinning each of these hatchbacks, a tweaked styling language, and a revised set of drivetrains across the board.  And yet, the more things change, the more they stay the same: what you’re getting from the 2015 Golf and GTI is the same mix of practicality, affordability, and smooth driving experience that has long been the hatchback’s trademark.

MQB For You And Me

MQB For You And Me

In typical Volkswagen fashion the biggest change made to the 2015 Volkswagen Golf lineup is one that you can’t see – namely, the adoption of the brand’s new MQB platform.  This modular chassis is versatile enough to serve as the basis for both the Golf and the new Audi A3 sedan, and it’s also going to be pulling duty underneath the automaker’s next-generation compact crossovers and other four-door vehicles.

MQB also affords weight savings for the 2015 Golf (up to 79 lbs depending on the model) as well as the ability to push the car’s cab backwards while still maintaining short front and rear overhangs.  You’ll still be able to easily identify both two and four-door models of the Golf and GTI, as their newness is betrayed more by narrower headlights and a more aggressive hood design than by any significant changes made to their overall shape.  Keen eyes will detect the 2.1-inch stretch in overall length, which is slightly enhanced by the car’s 1.1-inch drop in height.

If the somewhat larger dimensions of the 2015 Volkswagen Golf and Volkswagen GTI suggest to you that the hatchback’s passenger compartment has also been pushed out at the edges, then you would be right.  Although overall interior room has only increased by a modest amount, there more space for shoulders and elbows front and rear, along with an almost 16 percent increase in cargo space for a total of 52.7 cubic feet with the back seat folded forward.  A wider rear hatch opening with a lower sill also makes it easier to load items in and out of the Golf.

Volkswagen has reorganized the Golf’s dashboard, tilting the center stack slightly towards the driver, and there’s also new trim for fingers to explore alongside reasonably soft touch plastics everywhere except the upper areas of the door panels, which are stiffer than I would like.  Seat cover choices include V-Tex leatherette, cloth, and the familiar plaid pattern on the GTI’s sportier thrones.  Most important from a features perspective, however, is the new 5.8-inch touchscreen that is standard across the board.  Given that previous infotainment and navigation screens offered in the Golf were frustratingly slow to use, it’s nice to see VW recognize that it needed to step up its efforts in this area – the redesigned system is far more modern than the one it replaces.  The car is still missing a universal USB plug, however, a power and data access point that is fast becoming an industry standard.  Volkswagen promises that later-build Golf models will have one on offer.

2015 represents the first model year wherein each of the traditional Golf models – base, GTI, and TDI – are motivated by a turbocharged engine.  Yes, it’s true: the rough and inefficient 2.5-liter five-cylinder mill that once toiled under the hood of the entry-level Golf has been banished, and in its place is a new 1.8-liter turbo four-cylinder from which the TSI derives its name.  Producing 170 horsepower and 200 lb-ft of torque, the smaller mill is gutsier than 2014’s noisy five-banger, and it manages to deliver full twist as low as 1,800 rpm for a better around-town driving feel.

The 1.8-liter four-cylinder engine also offers a fuel mileage bonus, especially on the highway where it picks up an additional 6-mpg for a total of 37-mpg (the car’s city rating checks in at 26-mpg).  This is accomplished despite the fact that the base Golf TSI comes with a five-speed manual transmission, which is one forward ratio less than what I have come to expect in a modern compact car.  If you want six gears you’ll have to opt for the TSI’s traditional automatic tranny.

Not to be left out of the action, the 2015 Volkswagen Golf TDI also gains a completely new turbodiesel engine, albeit one whose operating characteristics are far more in keeping with the unit it replaces.  While horsepower jumps by 10 ponies for 2015 (for a total of 150), torque from the 2.0-liter four-cylinder turbodiesel holds steady at 236.  Fuel mileage is up by one mile per gallon for each respective measure (31-mpg city/35-mpg highway), but once again it’s a seemingly invisible change that will have the most impact on the Golf TDI’s driving experience.

Unable to meet emissions requirements any longer without the use of a urea injection system, the new diesel-burning hatchback loses the multi-link suspension system found on all other versions of the car.  In order to make room for the urea tank (which contains a liquid that is introduced into the Golf TDI’s exhaust stream in order to clean up its tailpipe) there’s a torsion beam arrangement that considerably dulls communication between the driver, the chassis, and the road.  As a consolation prize, at least the TDI continues to feature the choice between either a six-speed manual or six-speed dual-clutch automated manual gearbox.

The Volkswagen GTI has managed to become an institution in the 30-plus years since it was first introduced to Americans shopping for an affordable compact car that wasn’t bone-chillingly boring to drive.  It’s no longer 1983, and the GTI is facing a re-stocked cupboard of hot hatch challengers including the likes of the Ford Focus ST and the Mazda MAZDASPEED3, but to many enthusiasts any new iteration of the VW GTI immediately becomes the new gold standard in the segment.

Despite the presence of unique wheels and its standard sport-inspired body kit, the 2015 Volkswagen GTI didn’t quite convince me that this latest generation of the frisky hatchback would be able to defend its crown quite so vociferously.  Part of my hesitance to champion the GTI has to do with its modest power output, as the car has gained only 10 ponies compared to the 2014 edition.  Torque is up a more impressive 51 lb-ft feet, but even given the choice between a six-speed manual or a segment-exclusive six-speed DSG dual-clutch automated manual transmission, the 210 horsepower and 258 lb-ft of twist on offer from the car’s new 2.0-liter turbocharged four-cylinder engine pale in comparison to the 252 horses and 270 lb-ft of torque delivered by the boisterous Focus ST.

Blame it on the Golf’s product structure: while the Focus ST rules the hot hatch roost at Ford, the GTI must defer to the upcoming Golf R, which will develop ST-taming levels of thrust but at a much higher purchase price.  Being relegated to second-tier status is never a positive thing for a performance icon, especially when the GTI’s MSRP puts it directly at odds with its more powerful rival.

How do each of these new 2015 Volkswagen Golf models stack up against each other?  I had the chance to sample the Golf TSI with its optional six-speed automatic transmission, and I have to say I was impressed by the pairing.  There’s no question in my mind that nothing is lost in this car by denying it the availability of the brand’s DSG gearbox, as the auto’s shifts were smooth, to the point, and timely.  Acceleration from the 1.8-liter turbo is in keeping with other hatchbacks in the Golf TSI’s class, and it’s a far smoother and more pleasant drive when compared to the now-departed five-cylinder.

The Golf TDI doesn’t feel all that different out on the road than it did in 2014, at least from a whoa and go perspective.  Where the car demonstrates its superiority is in its chassis stiffness: there aren’t any of the creaks or twists of metal one occasionally experienced in the previous-generation Golf, especially on models equipped with a sunroof.  Not quite as nimble when tossed around as the Golf TSI, due to its handicapped rear suspension system, the Golf TDI is still a thrifty and comfortable commuter.

The 2015 Volkswagen GTI stands above its brethren by way of its superior suspension tuning and larger wheels which afford it with a higher standard of grip and responsiveness than any other Golf model.  The vehicle’s six-speed manual transmission is a pleasure to shift, and it comes crowned with a dimpled golf ball shifter to further drive home its special place in the VW family.  Volkswagen has also added a new two-stage electronic stability control system to the Golf GTI for 2015, giving it both an Off and Sport setting.  The latter introduces a higher intervention threshold intended to encourage more spirited driving in an on-track setting.

The vehicle I drove happened to be outfitted with the GTI’s optional Performance Pack, which brings with it larger brakes, 10 additional horsepower (for a total of 220), as well as a true electronically-controlled limited-slip front differential that works in concert with the standard XDS system (which uses the brakes to maximize traction in place of a traditional limited-slip unit).  Ordering the Performance Pack also makes an optional adaptive suspension system available with the car, a feature I did not have a chance to sample.

I found the GTI more difficult to launch than I expected, as the turbocharged mill was easy to bog unless I rode the clutch.  From a roll, however, the GTI’s turbo was happy to deliver horses above 3,000 rpm, making passing a breeze and transforming secondary roads into enjoyable workout spaces provided I was quick and clean with the gearbox.

Although I didn’t get to spend as much time with the 2015 Volkswagen e-Golf as I would have liked, I would be remiss in my reporting on the Golf family if I didn’t mention its eco-friendly charms.  Specifically, the e-Golf offers all of the practicality of the standard Golf hatchback coupled with a 115 horsepower electric motor that also puts out 199 lb-ft of torque.  This is the first fully-electric hatchback I’ve had the chance to sample, and I was quite taken by the e-Golf’s instant acceleration, quiet operation, and compliant handling.  Scheduled to go on sale in select states at the very end of 2014, the Volkswagen e-Golf features a range of up to 115 miles (thanks to its driver-selectable operating modes) as well as a four-hour fast charge time for its lithium-ion battery.

There’s one more bombshell associated with the 2015 Volkswagen Golf, and that’s its price.  VW has chopped $2,200 off the entry-level MSRP for the Golf TSI with the $17,995 two-door Launch Edition, and $3,000 from the base model Golf TDI.  Even the 2015 Volkswagen GTI has seen its window sticker shredded by a $700 decrease.

It’s clear that Volkswagen’s new Golf pricing strategy represents a long-overdue market correction given the preponderance of excellent, and affordable compact cars currently available, and it’s a welcome savings for shoppers in the segment.  That being said, while there’s no tectonic shift to be had from the redesigned 2015 Golf, it’s definitely worthy of investigation for anyone seeking an inexpensive commuter (TSI), a long-range fuel sipper (TDI) or a sporty, yet still practical daily driver (GTI).  Sometimes good can get better without having to go back to the drawing board, and that’s just what Volkswagen has accomplished with this refresh of its iconic hatchback. 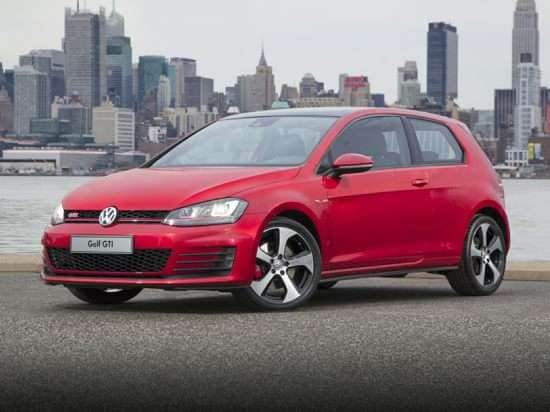