The 2012 Volkswagen GTI is the latest in a line of affordable, fun to drive hatchbacks, available in both two and four door configurations. The GTI seats five and is powered by a 200 HP 2.0 Liter TSI four cylinder and shifted via a six speed manual or a six speed DSG gearbox and is good for an estimated 21 MPG in the city and as much as 31 MPG on the highway.

Starting out at $23,995, the base GTI coupe comes well equipped with features like a leather wrapped sport steering wheel, AM/FM/CD/MP3 stereo and a set of 18-inch alloys, while the four door version retails for $24,595.  The Convenience and Sunroof package adds a touch screen display as well as a multifunction steering wheel and the obligatory power sunroof starting at $26,275 ($26,875 four door).  The VW GTI with Sunroof and Navigtion bundles bi-xenon HID headlamps, LED daytime running lights and a touch screen navigation unit as well as the extra window in the roof, starting at $27,845 ($28,445 four door).

Meanwhile the top of the line Autobahn edition gets a set of unique double, five-spoke 18-inch rollers, as well as the Dynaudio premium sound system, keyless entry with push button start and leather, starting at $29,995 ($30,595 for the four door), as well as every feature that  adorned the lesser GTIs like the car’s power tilt/slide sunroof and touch screen navigation unit, making it a very well equipped fun car. 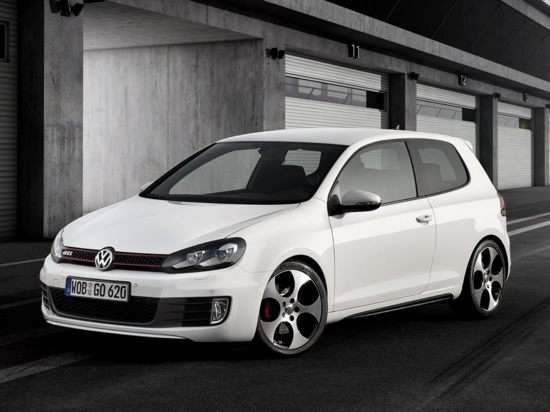