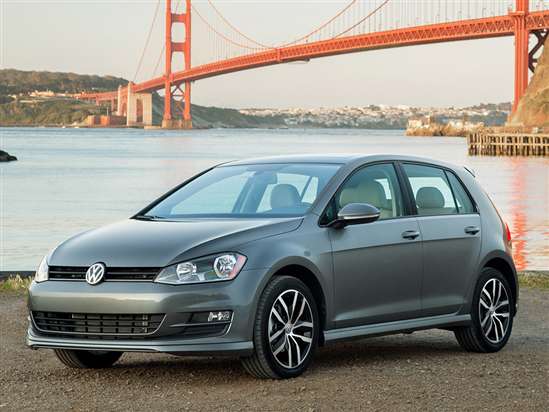 Changes for the 2014 Volkswagen Golf:

Volkswagen is about to debut a completely redesigned Golf model, so for the abbreviated 2014 model year, the Golf is sold only as a 5-door hatchback model in 2.5 and TDI model series. The car's Carefree Maintenance plan is reduced for 2014, covering scheduled maintenance for two years/24,000 miles instead of three years/36,000 miles.

Both Golf models include free schedule maintenance for the first 2 years or 24,000 miles of ownership. The Golf 2.5 can be equipped with an optional power sunroof, while Volkswagen reserves a navigation system, a premium sound system, and keyless passive entry with push-button starting for the Golf TDI variant.

The National Highway Traffic Safety Administration has not performed crash tests for the 2014 Golf. Last year, the Insurance Institute for Highway Safety called the car a “Top Safety Pick,” but had not assessed its performance in the tough new small overlap frontal-impact test.

A touchscreen infotainment system and Bluetooth are optional for the Golf 2.5 and standard for the Golf TDI. The TDI can also be equipped with navigation, a premium audio system, and a keyless passive entry system with push-button starting.