Maybe it's due to its European upbringing, or perhaps it's because buyers never quite cottoned to the entry-level Tiguan SUV, but Volkswagen is one of the few automakers that has clung steadfast to the notion that every one of its showrooms should offer at least one small, affordable wagon. The 2015 Volkswagen Golf SportWagen picks up where last year's Jetta SportWagen left off: a compact wagon based on the Golf platform (yes, even the unusually-named Jetta variant had Golf roots) that prioritizes practicality without compromising efficiency.

Given that the Golf has been completely redesigned for 2015, it's only natural that the Volkswagen Golf SportWagen should follow in its footsteps. The list of similarities between these two sisters is far longer than that of their differences, but they target two distinct groups of buyers. Whereas the Golf hatchback aims to please budget-conscious buyers cross-shopping models like the Mazda Mazda3 and the Honda Fit, the Golf SportWagen is after would-be SUV buyers disappointed by the real-world fuel consumption of vehicles such as the Ford Escape, the Chevrolet Equinox, and, dare I say it, the previously-mentioned VW Tiguan.

The TDI S includes 16-inch wheels, keyless entry and ignition and a rearview camera on top of the TSI S' features, while the TDI SE and TDI SEL mirror their TSI counterparts. You'll pay $3,200 extra to swap the turbodiesel engine into the S trim car, but only $1,000 for the SE and SEL. SE and SEL cars of both stripes are also eligible for the Lighting package (adaptive HID headlights, LED daytime running lights, LED reading lights) and the Driver Assistance package (forward collision warning and parking assistance).

The 2015 Volkswagen Golf SportWagen is an all-new design based on the Golf hatchback.

Imagine a Golf hatchback with a longer roof and you've got a good idea of what the 2015 Volkswagen Golf SportWagen looks like. The front end and even the hatch out back are virtual carbon copies of the Golf that went on sale in the U.S. last year, but the effect of visually lengthening the Golf SportWagen's profile adds a certain handsomeness to the family ride. You were probably surprised to read that the Golf SportWagen can be had with 15-inch alloy rims, but I never saw them during the day I spent with the vehicle, as I drove either SE or SEL trims with the more aggressively-styled 17 and 18-inch rollers which fit well under the car's wheel arches.

The interior of the VW Golf SportWagen is also a direct port from the hatch, which means you get the same generally classy confines as you would find in the four-door liftback. The SEL trim looked and felt somewhat upscale from the driver's seat, but I'd draw the line at calling it a premium experience; Volkswagen's dashboard and gauge cluster still present as somewhat plain compared to the more expressive designs found in several of the compact SUVs it aims to usurp.

The 2015 Volkswagen Golf SportWagen offers somewhat better overall passenger room than the Jetta SportWagen it replaces.
Cargo room is down by three cubic feet with the rear seatback raised, but nearly identical with the same seats folded forward.

The 2015 Volkswagen Golf SportWagen offers a modest increase in its exterior proportions compared to the Jetta SportWagen that preceded it, which translates into three additional cubic feet of passenger space and a bit of a boost in the headroom department (despite the roofline being lower in the new model). As with the Golf whose MQB platform it shares, there's respectable amounts of passenger room to be found in both the first and the second row of the vehicle, even for adults.

Given that a wagon is primarily about hauling cargo as well as humans, it's disappointing to discover that there's in fact three cubic feet of space missing between the rear seat and the hatch opening of the SportWagen for 2015 versus 2014 - a fact that Volkswagen explains away by pointing to the easier-to-load cargo floor. 30 cubes is still a decent boost over the standard Golf hatchback, however, and the Golf SportWagen's 66 cubic feet of total storage space with the back row folded forward is on par with the departed Jetta SportWagen and large enough to challenge vehicles like the Toyota RAV4 and the Honda CR-V in terms of practicality.

The 2015 Volkswagen Golf SportWagen borrows its feature-set from the Golf hatchback.

There'd no difference between the features and controls found in the 2015 Volkswagen Golf SportWagen and the Golf hatchback, which means you get the same next-generation touchscreen infotainment system, LCD driver display, and access to upgrades such as Fender audio and adaptive headlights. Volkswagen has come a long way in improving its navigation, communications, and stereo interface, which is now easier to use than ever before. Still, its graphics and its small, under six-inch screen size see it lagging behind major players like Ford and Chrysler in the connectivity space.

You'll also be surprised to find out that there's still no USB plug available in the Golf SportWagen. VW tells us that hopefully by the 2016 model year (which is arriving quickly - these 2015 SportWagens won't be on the lot for long) this technological barrier will be broken by the automaker's engineering team.

The 2015 Volkswagen Golf SportWagen features dual forward airbags, side impact airbags up front, and a pair of side curtain airbags that deploy along the entire length of the passenger compartment. Electronic stability control and traction control are also standard, but you have to equip the car with the Driver Assistance package in order to benefit from any active safety equipment, and even that is fairly limited: you get a forward collision warning system that uses radar to detect whether you are closing in on the vehicle ahead of you too quickly.

In practice, I found this system to be fairly useless, as the graphic it displays as a warning is easy to miss on the bottom left of the gauge cluster (I never got close enough for an audible warning to sound). Even worse was the fact that it would illuminate when the car decided I was following traffic ahead of me too close, which was all the time. It's kind of like riding with your grandmother in the passenger seat, only instead of her squeezing your knee when she gets nervous, she lights up a small icon on the dashboard.

Crash-Test Ratings: The Golf SportWagen has yet to be crash tested by either the IIHS or the NHTSA, but the Golf hatchback that the SportWagen is based on was awarded Top Safety status by the IIHS.

The entry-level 2015 Volkswagen Golf SportWagen TSI is outfitted with a 1.8-liter, turbocharged four-cylinder engine that produces 170 horsepower and 184 lb-ft of torque when matched with its standard five-speed manual transmission. Torque grows to 199 lb-ft should you opt for the available six-speed automatic transmission. TDI models benefit from a 2.0-liter turbodiesel four-cylinder that's good for 150 horses and 236 lb-ft of twist, with the choice of either a six-speed manual or a six-speed, dual-clutch automated manual gearbox.

Fuel efficiency figures for the gas and diesel engines are both excellent (and were verified during real-world driving as being fairly accurate). The TSI posts 26-mpg in city driving and 36-mpg on the highway, which is an increase of two and three miles per gallon for each respective measure as compared to the Jetta SportWagen. The Golf SportWagen TDI delivers 31-mpg around town and 43-mpg during highway cruising, which bests the Jetta SportWagen's 30-mpg/42-mpg rating.

Some buyers will take the 2015 Volkswagen Golf SportWagen's name at face value, but digging too deep to find the 'sport' ignores the 'wag(e)n' that's the much more important aspect of this affordable compact. There's no question that the Golf SportWagen offers an improved driving experience over the majority of small crossover and SUVs at its price point, as its low-to-the-ground ride height and fairly tight chassis give it a huge advantage over more ponderous fare. Push the SportWagen too hard, however, and the cracks in its compliant façade start to appear: you'll begin to feel the extra 150 lbs or so that the vehicle carries over its hatchback twin, with body roll reminding you that you're on your way to soccer practice, not setting a lap record at the Nurburgring.

Once you realize that the Golf SportWagen is all about the daily drive then you'll no doubt come to love its comfortable character as much as I did. Steering is respectably direct for a family vehicle, and power from the car's 1.8-liter turbo gas engine gives it an extra spring in its step over the TDI model off of the line (especially when equipped with the torquier autobox). The diesel edition of the SportWagen provides a bit more of a push at highway speeds when you pin the accelerator to the floorboards, but you'll have to be more careful planning a passing maneuver in town, as its responsiveness is more lackadaisical compared to the TSI. I didn’t have the chance to fully load up either version of the Golf SportWagen with cargo, but the specs on each engine have me convinced that the vehicle would turn in a solid performance even when overladen.

The 2015 Volkswagen Golf SportWagen more than succeeds at its mission of amplifying the practicality of the Golf hatchback without any efficiency or comfort penalty. If you like the way the Golf drives, then you'll be happy with the SportWagen, and that goes double if you're coming out of a Tiguan (which is where I suspect a high percentage of future SportWagen buyers will originate).

For families on the go, it's hard not to like a wagon that can go toe-to-toe with some of the most popular crossovers and SUVs in the cargo department, and while all-wheel drive isn't yet on the table (look for it in the 2017 model year), the improved handling, comfort, and mileage of the Volkswagen more than makes up for any perceived deficit. If you can swing the extra $1,000 or so over the base four-door Golf hatch, then the SportWagen is an no-brainer.

Volkswagen USA supplied the vehicle for this review. 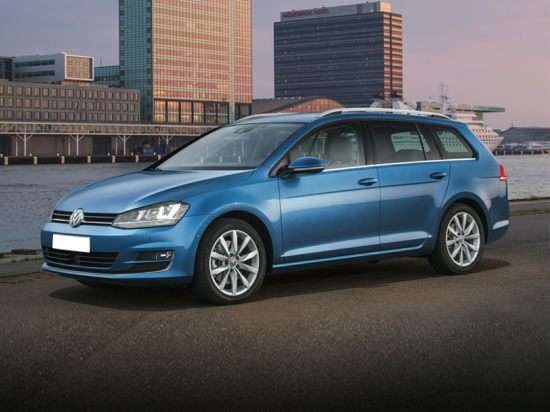