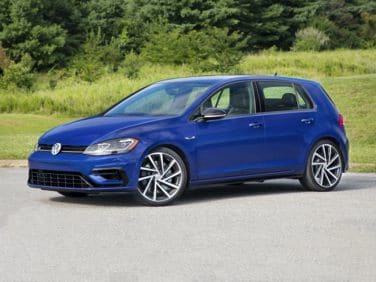 All About Volkswagen Golf R

The Volkswagen Golf R is a high performance version of the sixth generation of Volkswagen’s long-running Golf hot hatch subcompact car. The German auto manufacturer premiered the Golf R at the Frankfurt Auto Show in September of 2009. Before the car’s debut, it had long been suspected that Volkswagen was working on a replacement for the limited edition high performance Golf R32 models that were sold as part of the Golf’s fourth generation lineup, in 2004, and the fifth generation lineup, in 2008. The Golf R offers many features similar to those that set apart the 2004 and 2008 Golf R32. Most notably, the Golf R features Volkswagen’s 4MOTION all-wheel-drive system, while Golfs are generally front-wheel-drive.

Now in its seventh generation, Volkswagen first introduced the Golf hatchback in 1974, although the automaker changed the name of the car to make it more appealing in certain markets. For example, in Mexico, the first generation Golf was called the Volkswagen Caribe. In the United States and Canada, the first generation Golf was called the Volkswagen Rabbit, a name that was resurrected for nostalgia value as the car entered its fifth generation. For much of the Golf’s life, it shared a platform, drivetrain, and many body components with the Volkswagen Jetta sedan (which also changed names in different global markets). The cars, both designed around Volkswagen’s A platform, occupied side-by-side spots at the low-priced end of the Volkswagen model lineup. The Golf was a front-engined, front-wheel-drive, watercooled economy car that was intended to convert over some customers from Volkswagen’s Beetle hatchback. The Golf was originally a two-door hatchback, but the car was adopted into convertible, four-door hatchback, and wagon forms. A performance variant, the Golf GTI, was was given more powerful engine options, a sportier interior, better suspension and wheels, and other exclusive features. The Golf GTI, which later became known simply as the GTI and was eventually marketed as a separate model, has endured alongside the Golf throughout all seven generations of the car, allowing Volkswagen to market the versatile hatchback to several different demographics at once. In addition to the 2004 and 2008 Golf R32s, there have been many other special editions of the Golf and GTI throughout the years; at the time of its release, the Golf R was the highest performance Golf available.

Volkswagen announced the Golf R’s release in the United States as a 2012 model in December of 2010. A similar announcement was later made for the Canadian market. It is common for Volkswagen to limit production of high performance models; the 2004 and 2008 Golf R32s were limited to one model year and just several thousand units. In keeping with that tradition, only 250 Golf R units were allotted to Canada for the 2013 model year, and all sold out. The United States was slated to get two-door and four-door Golf Rs, whereas Canada would get only the four-door version. United States buyers were allowed to choose some options, such as navigation, keyless entry and sunroof, but all Golf Rs destined for Canada were built with these features already in place. The 2013 Golf R also features a 2-liter turbocharged FSI engine that produces 256 horsepower, paired to a six-speed manual transmission (though some markets only got a six-speed automatic DSG transmission). The Golf R uses Volkswagen’s Haldex-based 4MOTION all-wheel-drive system. The Golf R’s 0-62 acceleration time (the equivalent of the European standard of 0-100 km/h) is 5.5 seconds for DSG models, and 5.7 seconds for manual transmission models. The Golf R also features other high performance improvements throughout the engine, such as forged pistons for lower compression, higher duration camshafts, better injectors with a 13 percent improvement of flow, a larger turbo and a larger intercooler. The Golf R has been detuned slightly for warm weather climates such as Australia and Japan, and, as of the end of 2013, was no longer available in Canada since the country’s allotment of cars had been completely sold.