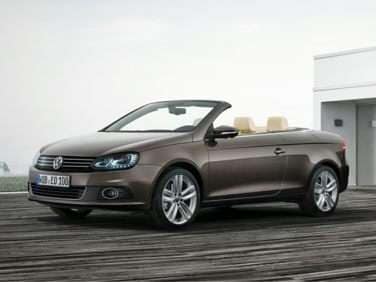 All About Volkswagen Eos

The Volkswagen Eos is a two-door, four passenger hardtop convertible. Volkswagen has a history of making small, fun convertibles that are great at capturing the joy of open-top motoring. A common platform used for these ragtops was the Golf, and both the first and third generation Golfs were available in convertible form. Named the Cabriolet, and later shortened to just the Cabrio for the fourth-generation, these vehicles were popular and economical to own and operate.

The Cabrio was dropped from the VW lineup in 2002, and it was several years before the replacement vehicle, the Eos, was introduced in 2007. The Eos differs from the previous Volkswagen convertibles in that it has a retractable hardtop, allowing it to be marketed as both a coupe and a drop top. Also unlike the Cabriolet, the Eos is not based on the Golf – it is in fact a unique vehicle built on the same platform as the Passat, and shares no body panels with any other VW.

The hard top is a beautiful thing to behold. Its integrated glass sunroof actually opens, making it the only vehicle of its kind to offer this feature with a convertible top. The front end of the vehicle is very similar to the GTI, and the way that the roof slopes to the high rear haunches increases the impression that the vehicle is meant to resemble a truncated Golf. The Eos offers nearly the same trim levels and engine configurations as the Passat: Turbo, Komfort, Lux and VR6, although the Eos benefits from a 6-speed manual transmission option in both the Turbo and the Komfort. The remaining versions of the convertible come equipped with a 6-speed automatic that provides paddle shifting via Volkswagen’s DSG system. All trim levels except the VR6 are powered by a 2.0 liter turbocharged 4-cylinder engine which makes a healthy 200 horsepower. The VR6 comes with a more vivacious 250 horsepower, 3.2 liter V6.

While the Eos may appear small from the rear, it is actually fairly comfortable even for four passengers – there is no space for a third in the backseat due to the narrowness imposed by the stowed hardtop mechanism. As with most mid-size convertibles, long trips with a car full of adults are not recommended, but that is rarely the primary function of a vehicle such as this. The Eos is meant for summertime fun, and at that it excels. Power delivery is smooth from either engine, and both transmissions are also up to the task of providing buyers with a pleasurable driving experience. While the Eos may evoke the GTI visually, it is not the nimblest of vehicles – typical of convertibles, the curb weight has been notched up due to the extra bracing and safety equipment that must be installed. The VR6 model tips the scales at almost 3700 lbs, meaning that the Eos’ handling is more akin to that of a mid-size sedan than a sprightly water bug.

Despite this weight handicap, the Eos manages to return a respectable 30 miles per gallon in highway driving and 21 miles per gallon in the city with the turbocharged 4-cylinder. Combined with the all-season convenience of a hardtop convertible, the Volkswagen Eos is a solid choice for those who desire a convertible but require it to also have a somewhat practical side.

The 2009 Volkswagen Eos is a carryover from 2008. The 2009 Eos is available in two trims, the Komfort and the Lux. Both editions of the hard top convertible use the same 200 horsepower, 2.0 liter turbocharged 4-cylinder engine as standard equipment. This engine also produces 207 lb-ft of torque and sees 21 miles per gallon in city driving and 31 miles per gallon on the highway. The 3.2 liter V6 engine has been dropped from the lineup. The Komfort trim comes with a 6-speed manual with the option of upgrading to a 6-speed DSG semi-automatic, while the Lux comes exclusively with the DSG unit.