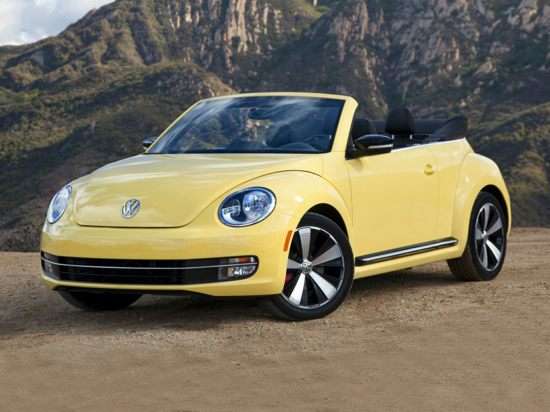 Changes for the 2014 Volkswagen Beetle:

The Beetle lineup sees significant change for 2014. The standard 2.5-liter 5-cylinder engine is phased out during the course of the year in favor of a new turbocharged 1.8-liter 4-cylinder, which is accompanied by electric steering. The Beetle Turbo is now called the Beetle R-Line and gains 10 extra horsepower, and a performance-tuned Beetle GSR Coupe joins the lineup in limited numbers.

Additionally, all Beetles are equipped with an independent rear suspension this year, and the 2014 Beetle is also offered with Volkswagen’s new Car-Net telematics system and a reversing camera. Volkswagen also reduces coverage for the Carefree Maintenance program to two-years/24,000 miles.

Volkswagen sells the 2014 Beetle in coupe and convertible body styles, in 2.5, TDI, R-Line, and GSR Coupe trim levels. During the course of the 2014 model year, the Beetle 2.5 will be phased out in favor of the new Beetle 1.8T. Beetles are generously equipped at their base prices. Options include leather seats, a power sunroof (Coupe), a premium audio system, a navigation system, upgraded wheels, and more.

Though the 2014 Beetle starts the model year equipped with a standard 170-horsepower, 2.5-liter 5-cylinder engine, by the end of the model year it will have a new turbocharged, 1.8-liter 4-cylinder engine that generates the same amount of horsepower, produces more torque, and provides greater fuel economy. Buyers choose a manual gearbox or a 6-speed automatic transmission.

The Beetle R-Line model is tuned for performance, and is essentially a GTI-ified Beetle. This year, the R-Line model gains extra horsepower for a total of 210. The Volkswagen GSR is a limited-production version of the R-Line Coupe model.

The EPA says the Beetle 2.5 gets 25 mpg in combined driving with either transmission. Ratings for the new replacement engine, the turbocharged 1.8-liter, are not available as this summary is written, but in the Jetta that powerplant delivers significant improvement in fuel economy.

For the best gas mileage, get the Beetle TDI, which is rated to return 32 mpg in combined driving, regardless of transmission choice. Choose to take the performance route, and the Beetle R-Line and GSR models are expected to deliver 26 mpg no matter which transmission you select.

According to the National Highway Traffic Safety Administration, the 2014 Volkswagen Beetle Coupe receives an overall crash-test rating of 5 stars. The Beetle Convertible is not rated. The Insurance Institute for Highway Safety gives the Beetle a “Good” rating in all assessments except the new small overlap frontal-impact test, for which the car receives a “Marginal” rating.