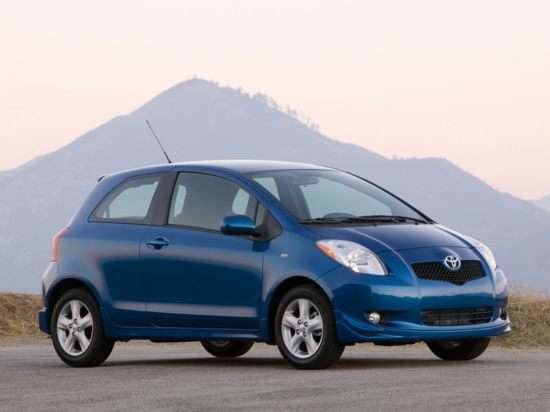 Have you ever wondered what kind of car a pirate would drive? Why none other than a Toyota YARGH-is, of course! Pirate (and naming) jokes aside, the Toyota Yaris is a good choice in cars for a land lover who also happens to care about saving money as well as the environment. Among the growing number of subcompact hatchbacks on the market, the Yaris focuses on maximizing fuel economy and interior comfort. Unfortunately for Toyota, the 2008 Yaris was only available as a sedan or a three-door hatchback leaving it unable to fully compete against the likes of the Honda Fit, Hyundai Accent or Chevrolet Aveo5. Hoping to cash in on all those jumping ship from large SUVs, Toyota introduced the Yaris 5-Door Liftback for the 2009 model year combining the best aspects of both current Yaris models: the convenience of four passenger doors and a cargo-friendly hatchback layout.

With a starting MSRP of $13,305, the Toyota Yaris 5-Door Liftback is the top-of-the-line model. With a price that low, it not only helps drivers save money at the pump, but in the showroom as well (the Yaris 3-Door Liftback starts at $12,205). Our test car added a few convenience options bumping the bottom line price up to $16,449 out the door. The new Yaris 5-Door’s pricing definitely isn’t the cheapest in this class, but it does offer just enough comfort and style to make it a viable option among subcompact hatchbacks, something that the 3-Door Yaris couldn’t manage on its own. When it comes to the question of the Yaris cannibalizing sales from the Scion xD, buyers looking to stay away from the youthful marketing of Scion will be pleasantly surprised with the all-new five-door Yaris hatchback.

Besides the extra set of doors, the 2009 Yaris 5-Door doesn’t really differ too much from the 3-Door model. Our test car came in Bayou Blue and was fitted with 15-inch alloy wheels, but not much could be done to make such a small car look sporty. The short hood and curvy lines give the Yaris a cute look that may be one of the best looking in its class when compared to the polarizing styles of the Fit and xD. For those who absolutely need to add some resemblance of sportiness to their Yaris, Toyota offers the Yaris in “S” trim similar to the bigger Corolla.

Inside, the new Yaris hatchback is a surprisingly spacious cabin fit for four adults, but the most noticeable aspect of the car is its unique layout. Like the Scion xB, the Yaris’ gauges are mounted in the center of the instrument panel giving it a youthful, hip look but also making it easier switching over to right-hand drive. The good news for this layout is the numerous storage bins and cubbyholes that are opened up by moving the gauges to the center, but the bad news is that this setup takes the gauges out of the driver’s natural line of sight and it also puts the odometer and trip meter very far away from the driver’s reach. For storage, there were two glove boxes on the passenger side and another on the driver side where a conventional car would have its gauges. The center stack also proved to be a great place for storage with one being on each side of the vertically positioned HVAC controls. Like the Fit we test drove, this Yaris did not have a center armrest for the driver, but the seats were probably more comfortable than any other subcompact we’ve driven.

Adding to this car’s total MSRP, the Yaris came with an optional ($1,970) Power Package that added quite a few convenience options as well as a tech-laden stereo head unit. The main benefits of this package are the power windows, door locks and outside mirrors and rear window wiper and defroster. The stereo is an easy-to-use AM/FM/CD with MP3/WMA compatibility and a nifty auxiliary jack in the center console. It would have been better if the jack was mounted near the power outlet under the center stack, but it still proved useful. For improved rear passenger comfort and added cargo use, this package also includes the 60/40 split bench seat that can slide fore and aft as well as recline or fold flat featuring a folding hard plastic lining to prevent cuts or scratches when loading heavy objects.

Powering all Yaris models is a 1.5-liter inline-4 that has an output of 106 horsepower and 103 lb-ft of torque – both average for this class. The important thing about the Yaris is its fuel economy. Our test model, equipped with a four-speed automatic transmission, had an EPA fuel economy rating of 29 miles per gallon in the city and 35 mpg highway. Models with the base five-speed manual transmissions improved to 36 mpg on the highway while remaining even in city driving, and city driving is where the Yaris really shines.

As defined by the fact that the Yaris is a city car, Toyota didn’t design the Yaris for anything sporty and luxurious but focuses on making the Yaris an easy-to-use daily driving. While driving the Yaris can be fun, there probably aren’t many other cars that are easier to park (other than cars like the Lexus LS460 that can park itself). With its short overall length and wheels pushed out to the corners, the Yaris 5-Door will fit in just about any parking spot you can find. The suspension is such that the front MacPherson struts and rear torsion bar can take just about any jolts without getting tossed all over the road.