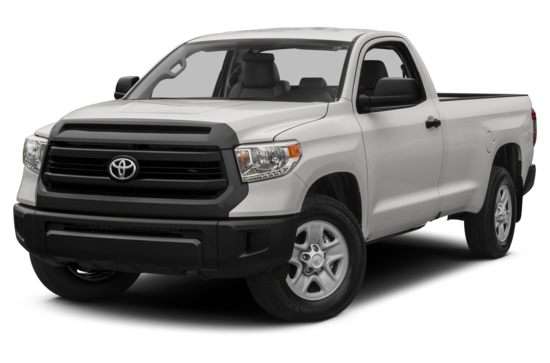 Changes for the 2014 Toyota Tundra:

Restyled inside and out, the 2014 Tundra continues with the same platforms and powertrains as before, but with refined ride-and-handling characteristics and modified equipment packaging. All 2014 Tundras come standard with Bluetooth connectivity and a reversing camera, and Toyota’s next-generation Entune audio and infotainment systems are available this year. A Blind Spot Monitor and a Rear Cross Traffic Alert system are new options, and a new 1794 Edition special-edition model debuts. Three new colors arrive for 2014: Attitude Black, Sunset Bronze, and Blue Ribbon.

Toyota sells the 2014 Tundra in Regular Cab, Double Cab, and Crew Max body styles equipped with 2-wheel drive or 4-wheel drive and one of three different engines. Trim levels include SR, SR5, Limited, Platinum, and 1794 Edition. Only the Tundra SR can be purchased in a Regular Cab configuration, while the Platinum and 1794 Edition are sold exclusively as CrewMax models.

The Tundra Regular Cab and Double Cab models have a standard 4.0-liter V-6 engine that generates 270 horsepower at 5,600 rpm and 278 lb.-ft. of torque at 4,400 rpm. A 5-speed automatic transmission is standard with the V-6 engine.

For good reason, Toyota likes to remind truck buyers that it is the only company that complies with SAE J2807 towing standards, which are designed to give consumers more realistic tow ratings than those currently touted by truck makers. In other words, SAE J2807 levels the playing field. Unfortunately, nobody has shown up to play, except Toyota. Based on the new standard, a properly-equipped Tundra can tow up to 10,500 pounds and carry up to 2,040 lbs. of payload.

According to the EPA, the Tundra’s base V-6 engine gets 17 mpg in combined driving, the 4.6-liter V-8 returns 16 mpg regardless of drivetrain type, and the 5.7-liter V-8 delivers 15 mpg whether or not its paired with a 4WD system.

The 2014 Toyota Tundra had not been crash-tested as this vehicle summary was written.

Toyota says it is the first full-size truck manufacturer to offer a reversing camera as standard equipment, and to offer a Blind Spot Monitor with Rear Cross Traffic Alert as an option. The Tundra’s available Entune touchscreen infotainment systems include Bluetooth calling and music streaming, and USB 2.0 technology. Upgrades include HD Radio, Traffic, and Weather; Entune App Suite; a navigation system, and more.