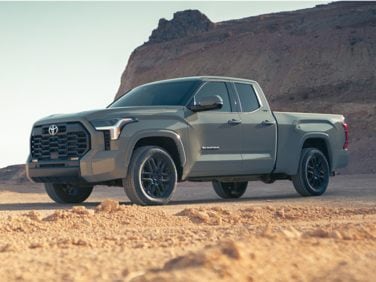 All About Toyota Tundra

The Toyota Tundra is a two-door, three passenger full-size pickup truck, and a four-door, five-to-six passenger (CrewMax) full-size pickup truck. Toyota entered the full-size pickup truck wars in the 1990’s, but it wasn’t until they released the Toyota Tundra in 1999 that they caused any heads to turn in North America. Until that time, Toyota pickups had seriously lagged behind the domestic competition in terms of size and power. The Tundra, however, had specifically targeted the Big Three truck makers, offering a V8 and comparable size and cargo capacity. In 2007, Toyota unleashed their strongest assault yet on Ford, Dodge and General Motors, beefing up the Tundra both in terms of power and brawny, extroverted looks.

The Toyota Tundra continues to impress North American truck buyers. Similar in many ways to the 2007 edition, the Tundra is at last truly a competitor when it comes to the hearts and minds of full-size truck buyers in the United States. Improving on their powerful product launch of the year before, Toyota has done their best to expand the number of trim levels and options available to consumers in 2008. Prices have also been reduced across the board in order to lure even more people into showrooms.

Like most large pickup trucks, the Tundra is now available in a wide number of configurations which are designed to fit the specific needs of buyers. The Regular Cab Tundra is available with or without 4-wheel drive, and comes standard with a 4 liter, 236 horsepower V6 engine that generates 266 lb-ft of torque. Two different V8 engines are also available across all trim levels, with the largest making an impressive 381 horsepower and a stump-pulling 401 ft-lbs of torque. This 5.7 liter unit also comes with variable valve timing in order to help increase fuel mileage. The engine is a technological tour de force, and among other features, for 2008 it has been upgraded to include variable exhaust timing. This helps generate maximum power under full throttle. A 5-speed automatic transmission comes with the V6 engine, while the top of the line V8 is outfitted with a 6-speed automatic.

For those who require additional seating, the Tundra comes in five and six-passenger versions, starting with the DoubleCab and moving on up to the four-door CrewMax. There are three different bed lengths available for the Tundra, topping out at 8 feet, but CrewMax trucks have to make do with the 5.5 foot bed. Like most modern pickups, the Tundra can be kitted out with all manner of luxury items, including a DVD player, parking sonar and enormous 20-inch rims. These go along with other, more practical accessories such as off-roading packages, towing packages and bed-liners.

The 2008 Toyota Tundra has come a long way from its more humble beginnings as an outsider looking into the full-size pickup world. The Tundra has an available payload and towing capacity to match any other pickup in its class, although the absence of heavy-duty versions of the truck does mark a hole in Toyota’s lineup. However, Toyota has decided to approach the market in a methodical fashion, building brand loyalty from the ground up before they decide to introduce subsequent editions of the pickup. The 2008 Tundra is a huge step in a positive direction for the Japanese automaker.