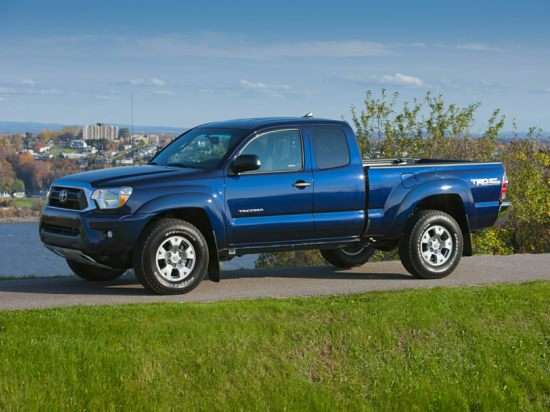 Changes for the 2015 Toyota Tacoma:

When buying a Toyota Tacoma, you choose between Access Cab and Double Cab body styles, decide whether or not you want rear-wheel or four-wheel drive, and then select between a 4-cylinder and a V-6 engine. There’s also a Pre-Runner model, a 2WD truck with the raised stance of a 4WD truck.

A 2.7-liter 4-cylinder engine is standard for the Tacoma, making a modest 159 horsepower and 180 lb.-ft. of torque. Chances are that most people will want to upgrade to the available 4.0-liter V-6 engine for its 236 horsepower and 266 lb.-ft. of torque. The V-6 will be necessary if you plan to exploit the Tacoma’s maximum payload rating of 1,500 pounds and maximum tow capacity of 6,500 lbs.

The NHTSA has not rated the 2015 Tacoma for crash protection, but the Insurance Institute for Highway Safety (IIHS) has conducted tests on the current version of the Tacoma.

In terms of the truck’s moderate offset frontal-impact and side-impact performance, the Tacoma earns the top rating of “Good.” The front seats and restraints also do a “Good” job of protecting occupants in a low-speed rear-impact collision. Roll a Tacoma, though, and the roof strength rating is “Marginal.” The IIHS has not assessed the Tacoma in its small overlap frontal-impact test.

The last time the Tacoma was redesigned, “Arrested Development” was cracking Americans up on television, and Snoop Dogg was dropping it like it was hot on the radio. Yeah, this truck is old. Still, Toyota will install a touchscreen infotainment system, a JBL premium sound system, a navigation system, Entune App Suite technology, and a reversing camera if you’re willing to pay for them.