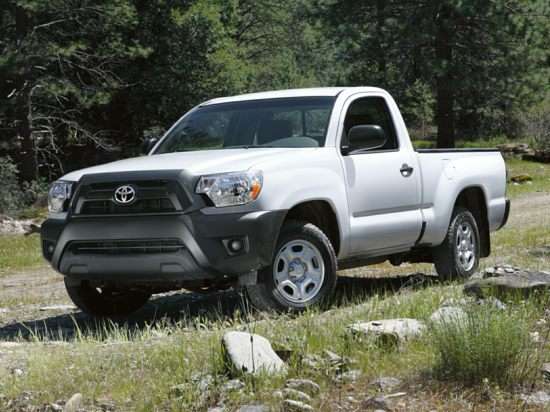 Changes for the 2014 Toyota Tacoma:

As the Toyota Tacoma enters its tenth year of production since the truck’s last complete redesign, it receives new Entune audio system options and a new SR Package that gives the Tacoma a sportier appearance. The performance-tuned street truck, the Tacoma X-Runner, is discontinued.

The 2014 Toyota Tacoma is offered in Regular Cab and Access Cab styles with a regular-length cargo bed, and as a Double Cab model with a choice between a short bed and a long bed. A PreRunner model, which has the look and ride height of a 4-wheel-drive version but remains a rear-drive truck, is available with Access Cab and Double Cab styles.

Trim upgrades are added in the form of option packages. Popular choices include SR5 and Limited trim upgrades, and buyers can also choose a new SR appearance package, a Toyota Racing Development (TRD) Sport package, and a TRD Off-Road package.

According to the National Highway Traffic Safety Administration (NHTSA), the 2014 Tacoma earns a 4-star overall crash-test rating regardless of body style. However, the Crew Cab models fare worse in the frontal-impact test than other versions, and the Regular Cab models don’t perform as well in the side-impact test as other styles.

In tests conducted by the Insurance Institute for Highway Safety (IIHS), the Tacoma receives the top rating of “Good” in all tests except for the roof strength assessment, for which the truck receives a “Marginal” rating. The IIHS has not conducted a small overlap frontal-impact test on the Tacoma as this summary is written.