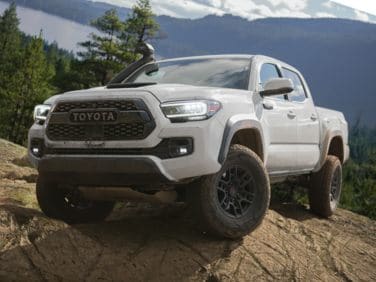 All About Toyota Tacoma

The Toyota Tacoma is a two-door, three passenger compact pickup truck, and a four-door, up to five passenger compact pickup truck. Toyota has been making smaller pickup trucks for export to North America for more than 30 years. Over time, these trucks have gradually grown larger and evolved into more functional vehicles capable of handling a greater range of tasks. The Toyota Tacoma made its debut in 1995 and has fared well against early competitors such as the Ford Ranger and Chevrolet S10. However, in order to respond to the trend which saw small trucks balloon in size until they were much more similar to their full-size counterparts, the Tacoma was redesigned in 2005 to be bigger and brawnier. The small truck now leads the market in terms of sales in the United States.

The 2009 Toyota Tacoma is little changed from the 2008 model. The truck has a somewhat indistinct style that resembles a mish mash of the Nissan line of trucks combined with the full-size Toyota Tundra. That being said, the vehicle is not unattractive, and when customized with the available X-Runner body kit, can be quite striking. A small air scoop in the middle of the truck’s hood gives it a sporty appearance, and rounded edges dominate the overall design.

There are two engines available in the Tacoma: A 4-cylinder engine rated at 159 horsepower and a V6 generating 236 horsepower and 266 lb-ft of torque. The smaller engine can be had with a 5-speed manual transmission or a 4-speed automatic, while the V6 is only available with a 6-speed manual or 5-speed auto. The three main body styles for the Tacoma are the Regular Cab, Access Cab, and Double Cab. Each can also be ordered with 2-wheel drive or 4-wheel drive, and a six-foot cargo bed. The Access Cab, like the Double Cab, offers additional seating for 3 in an enlarged passenger compartment, but unlike the Double Cab does not provide full-sized rear doors for entry and exit.

The Regular Cab comes with the usual barebones options – cloth seats, standard stereo and steel wheels. The larger Tacomas can be outfitted with greater luxuries such as power accessories and air conditioning. Many upgrade packages are available, including some that are uniquely Toyota-like. To start with, tying in with their tradition of desert racing, there is the Pre-Runner package, which imitates the look of an off-road vehicle but which limits the Tacoma to 2-wheel drive. The popular SR5 option improves outward appearance as well as internal trim, and the X-Runner package lowers the truck and gives it a street-racing appearance and an upgraded suspension. Several Toyota Racing Development or TRD option groups round out the offerings, and can customize the truck for on or off-road performance.

Regardless of which engine is ordered, the Tacoma is an excellent small truck, well suited to most of the demands which its owner will make of it in terms of hauling and towing. The 4-cylinder engine gives it substantially better fuel mileage than the V6, but at the cost of power and torque. However, if the truck is primarily used for light duty or around town driving, then the smaller motor is the logical choice.