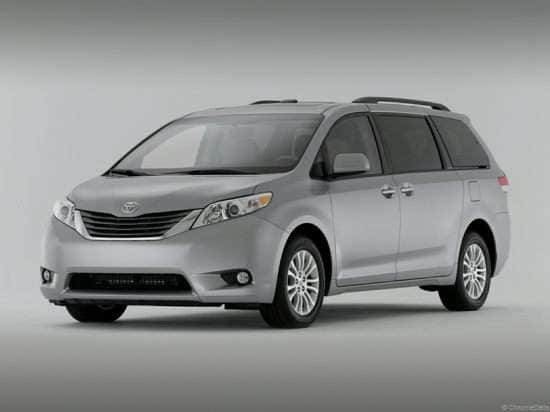 Changes for the 2015 Toyota Sienna:

Toyota refreshes the 2015 Sienna minivan, with the most significant upgrades happening under its familiar skin. Structural stiffening and a revised interior with soft-touch surfaces are new this year, along with updated controls and displays, standard 3-zone climate control, an optional heated steering wheel, and improved safety features, especially for the front passenger. New interior and exterior colors also debut.

Every 2015 Sienna also includes a standard reversing camera, a 6.1-inch touchscreen audio system, and a USB 2.0 port, while a DualView Blu-Ray DVD entertainment system with RCA jacks, an SDXC card reader, and HDMI inputs is available for some models. Perhaps the most important new feature is the new Driver Easy Speak system, which allows the driver to speak to rear-seat occupants without shouting. The system amplifies the driver’s voice using the minivan’s voice-command infotainment system microphone and the stereo speakers.

Toyota sells the 2015 Sienna in basic L, popular LE, sporty SE, upscale XLE, and luxurious Limited trim levels. If you need a minivan but want something fun to drive, consider the Sienna SE, which has a sport-tuned suspension and 19-inch wheels and tires.

Every 2015 Sienna is equipped with a 266-horsepower, 3.5-liter V-6 engine paired with a 6-speed automatic transmission. Front-wheel drive is standard, and the Sienna is the only minivan offered with an available all-wheel-drive system. All Siennas include free scheduled maintenance for the first 2 years or 25,000 miles of ownership.

If you decide to go with the Sienna AWD, know that it’s going to cost you an extra 2 miles per gallon in combined driving. That model is EPA-rated to get 19 mpg, while the front-drive Sienna should return 21 mpg.

Given the 142 additional spot welds applied to the 2015 Sienna’s underlying structure, it’s easy to understand why the NHTSA and the Insurance Institute for Highway Safety (IIHS) have not published official crash-test rating for this minivan as this summary is written. Both organizations will need to re-test the Sienna to see if the stiffer structure and additional front passenger seat-mounted airbag improve crashworthiness.

Toyota has upgraded the available Entune infotainment system for the 2015 Sienna. A basic 6.1-inch touchscreen audio system is standard, while some versions of the van offer an upgraded 7-inch display than can be upgraded with navigation and a premium audio system.

Entune App Suite is offers for most trim levels, and provides access to the Bing search engine, Internet radio, and other mobile applications through a paired smartphone. More expensive versions of the Sienna offer a Blu-Ray DVD entertainment system with a 16.4-inch DualView screen.

Unfortunately, Toyota reserves its Safety Connect service, including Automatic Collision Notification and an SOS Emergency Assistance Button, only for the most expensive Sienna Limited model. Speaking of safety technology, Toyota offers a blind-spot monitor with rear cross-traffic alert on SE, XLE and Limited models, while a Pre-Collision System is reserved only for the Sienna Limited.