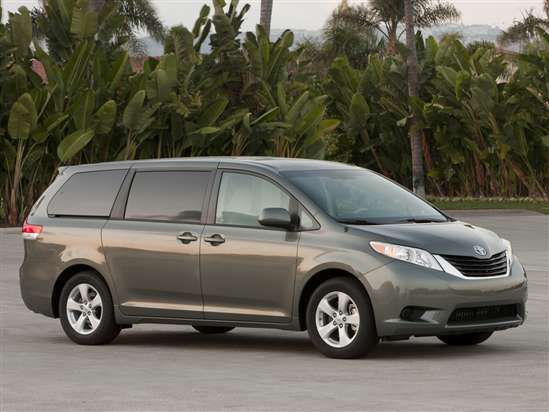 Changes for the 2014 Toyota Sienna:

All 2014 Sienna models are equipped with a standard Tow Prep Package, and Toyota now offers its Blind Spot Monitor with Cross-Traffic Alert system as a stand-alone option for the popular Sienna SE model.

The 2014 Toyota Sienna is sold in L, LE, SE, XLE, and Limited trim levels. The LE is the popular model, the SE is the sporty model, and the XLE and Limited models are the luxurious models.

A 3.5-liter V-6 engine is standard for the 2014 Sienna, making 266 horsepower that is fed to the front wheels through a 6-speed automatic transmission. The Sienna is the only minivan on the market offered with an optional all-wheel-drive system. Toyota includes free scheduled maintenance for the first two years or 25,000 miles of ownership.

The EPA says the 2014 Sienna will return 21 mpg in combined driving. Choose the Sienna AWD and the rating is 19 mpg.

In crash tests performed by the National Highway Traffic Safety Administration (NHTSA), the 2014 Sienna receives an overall rating of 5 stars, the highest rating possible. Dig deeper, though, and you’ll find that the front passenger’s protection level in a frontal-impact collision is rated 3 stars.

The Insurance Institute for Highway Safety (IIHS) called the Sienna a “Top Safety Pick” in 2013. As this summary is written, the van hasn’t been assessed in the difficult new small overlap frontal-impact test.

Every 2014 Toyota Sienna is equipped with a Smart Stop System that prevents the van from accidentally accelerating as long as the driver is stepping on the accelerator pedal. Bluetooth is optional for the Sienna L, while the Sienna LE and SE models get a standard reversing camera and an optional navigation system with Entune App Suite technology. For 2014, the SE can also be optioned with a Blind Spot Monitor system that includes Cross-Traffic Alert.

That safety feature is standard for the Sienna XLE. Options for the XLE include navigation, Entune App Suite, a split-screen rear-seat entertainment system, and a Smart Key passive entry system with push-button starting. Additionally, the XLE can be optioned with a panoramic reversing camera and rear parking assist sensors.