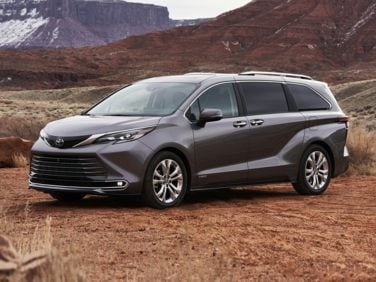 All About Toyota Sienna

The Toyota Sienna is a four-door, eight passenger minivan. Toyota has always marched to a beat of a slightly different drummer when it comes to minivans. For a long time, their flagship people-mover was the Previa, a mid-engine, rear-wheel drive vehicle that stood alone in its class as a result of both its futuristic bubble styling and its power train layout. The Previa was re-designed on the more conventional Camry platform in 1997, but was never sold in North America, where instead Toyota decided to start with a clean slate and market the similar Sienna – also based on the Camry.

The Toyota Sienna minivan is larger and more powerful than the original generation of vehicle. The Sienna is a much more conventional minivan that would normally be expected from Toyota, and it benefits from solid engineering and excellent execution. As with most minivans, the interior is among the most important features, and Toyota does not disappoint. Up to eight people can be hauled around in the Sienna, and interior room is comfortable and spacious. Buyers can choose from a wide range of trim levels and upgrade packages that can configure the Sienna to be as luxurious or as austere as is desired. On the high end of the scale, leather seats and active cruise control are matched with HID headlights and 17-inch rims. For base models, easy to clean fabric seats, a roof rack and all-wheel drive are available. The 148.9 cubic feet of cargo space bests many of its competitors in both the minivan and SUV world, and part of this hauling magic can be attributed to third-row seats which fold flat into the floor.

All versions of the Sienna are powered by the same 3.5 liter V6 engine, which in the minivan produces 266 horsepower and 245 lb-ft of torque. Not long ago, these kinds of power numbers were reserved for German sport sedans, but the ubiquity of modern horsepower has greatly benefited minivan drivers. The amount of available torque makes transporting a full load of passengers and sports or camping equipment safe and easy, even on the highway. The Sienna offers a single transmission, Toyota’s 5-speed automatic, regardless of whether front-wheel or all-wheel drive is ordered. The van will never be mistaken for a performance vehicle, but acceleration is brisk despite the hefty curb weight, and braking is excellent. However, the Sienna is saddled with a solid-rear axle which limits the amount of comfort over rough roads, and which can cause wheel bounce around corners.

When it comes to fuel economy, the front-wheel drive Sienna maintains a decent 19 miles per gallon in the city and 26 on the highway – not bad for a 4500 lb vehicle with a fairly large engine. The all-wheel drive version of the van, of course, sees a noticeable dip in these numbers. Overall, however, the Sienna has evolved into a vehicle which is form-fitted to transporting a large number of people in comfort and safety. This is underscored by the fact that stability control is now standard equipment on all trim levels – and given the 266 horsepower on tap, it’s a welcome addition.

The 2009 Toyota Sienna is a carryover from 2008. The 2009 Sienna is available in CE, LE, XLE and Limited trims. Each features the same 3.5 liter V6 engine that produces a healthy 266 horsepower and 245 lb-ft of torque. A 5-speed automatic transmission handles the shifting duties, and fuel mileage is rated at 16 miles per gallon in city driving and 21 miles per gallon on the highway.