The Toyota Sequoia offers full-size SUV shoppers the chance to get behind the wheel of an eight-passenger people mover that is based on the same platform as the Toyota Tundra pickup truck.  The Toyota Sequoia's suspension system has been tuned for comfort, but it can still tow up to 7,400 lbs of trailer as well as swallow 121 cubic feet of cargo thanks to fold-flat second and third row seats.  The SUV's safety features are listed as seat-mounted front side impact airbags, forward airbags, front knee airbags and side curtain airbags that deploy across the length of the vehicle's spacious interior.  Electronic stability control and traction control are also standard.

In terms of options, the Sequoia can be upgraded with a long list of a la carte features, and the SR5 trim also benefits from availability the Sport Appearance package (20-inch chrome wheels, more attractive exterior trim), and the Premium package (heated leather seats, fold-flat third row).

The Toyota Sequoia's base engine is a 4.6-liter V-8 that develops 310 horsepower and 327 lb-ft of torque, managed by a six-speed automatic transmission.  Fuel economy is rated at 14-mpg in city driving and 20-mpg on the highway.  The Sequoia is also available with a 5.7-liter V-8 that generates 381 horsepower and 401 lb-ft of torque.  Transmission choice remains the same, and fuel economy checks in at 13-mpg city and 18-mpg highway.  Four-wheel drive is optional with either engine.

A list of cars similar to the Sequoia includes the 2012 Chevrolet Tahoe, 2012 Ford Expedition and 2012 Nissan Armada. 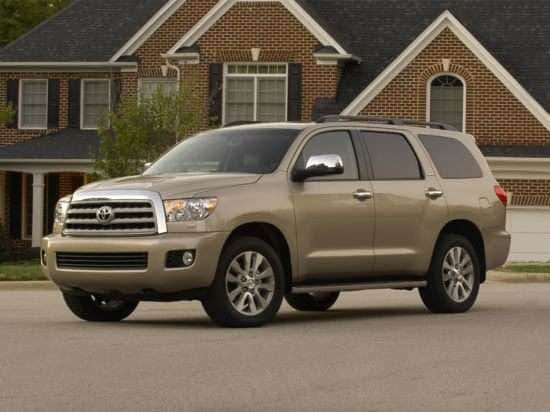